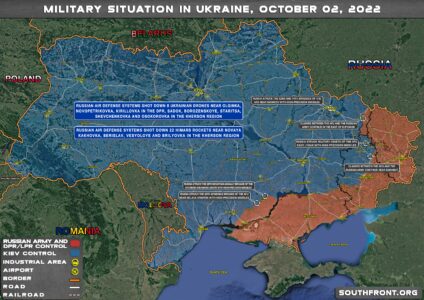 Seems all they can do is put on shows and parades. I’m thinking they should have just stuck to what they are good at.

You can’t fight a modern war without targeting the civilian infrastructure.

Well, I guess you could fight it, but you aren’t going to win.

Belgorod. Bringer of the fight to NATO NATO and the CIA like drunken fools think it’s a joke. Laugh CIA, morons of Langley please laugh into your grave. You are going to die !

Laugh NATO, Laugh like the drunken fools you are.

Death is the equalizer.

Ukraine has the Orcs on the run… heheheh

We are still # 1 in Monkeypox, AIDS and Syphilis… heheheh

Aww look a ukrainian troll goblin 👺 Running out of time

How far do you suppose the Russians would run from the grandchildren of the Dirliwangers and the Nachtingall fuckpiles? Think they’ll run across the border east of Lugansk? Do you reckon one single second of peace would come to any region populated by people who rejected the US coup in 2014 in the failed Ukrainian CIA project? Contary to Ukrotard and Five Eyes drivel, the Russians don’t want Ukrotardistan. They just don’t want the place whored out to NATO and their US owners in a condition that poses a threat to Russia. But the Russians won’t be giving up the territory with a population that chose Yanukovich in 2010. It simply will never happen, regardless of the ups and downs of the current conflict.

Donbas is 100% liberated
Reply to  Clyde

Clyde
Reply to  Donbas is 100% liberated

Yep. The instant the operation to stop the Ukrotard ethnic cleansing operation in Donbas. Look at how much of your territory you just gave the Russians after eight years of preparing for the Russian response to the failed ATO.

Should this map not be dated the 2nd of October?

Russian lines at the Dnieper River have reportedly completely collapsed.

War
Reply to  Vlad from Romania

US and UK have been killing 6 million of innocent peoples in the Middle East lol.

The situation is that Ukraine accumulates overwhelming force in an area, punches through the line (American doctrine, the kind that works). Meanwhile they train more forces in the West.

The trouble is I doubt Russia has the men, they would need China to intervene.

If the will is not there, surrender to save lives.

American doctrine is the kind that works? When, and where was this demonstrated? Anyhow, in the real world, the Ukrotards have perhaps 10 000 men that had to be taken to the UK to train so that they weren’t all killed on their own territory which they cannot actually defend. As time goes on it will be less and less appealing for Ukrotard men to get killed in an operation to attempt to drive the Russians off of land populated with people who have no allegiance to the post-2014 neoliberal nightmare identitarian failed Ukrainian CIA project. This Five Eyes rubbish story of a Ukrainian version of the insurgency in Afghanistan is infantile. Do you think that the Ukrotards will enjoy popular support for an insurgench in Luganks or Donetsk? They didn’t support Ukrotardistan after the coup, why would they after eight years of ethnic cleansing and Nation of Islam/Scientogy-style Ukrotardish indoctrination? Get a grip.

How much more of a grip can I have than having everything I have been screaming about for 6 months come true?

Please be aware that I have not been paying attention to you for six months, I am simply replying to the above post. Your response in no way addressed anything in my post. Strange.

but you still loving it , dont ya?

Russia must be go in ful War…. or have the next Afghanistan… She cant a Terrorist Operation with a Nato Army… is crazy. Bad Logistik, bad intelligence, Kommunication… No Military Games… More serious Fight.

When I see the lights shut off in Lvov I will believe it.

And while Russian forces are still clashing in the east of Kupyansk the main forces of the UAF are driving to the Lukansk border.

Clyde
Reply to  Putin is a genius

They got their asses handed to them by the folks who wouldn’t accept the identitarian kooky koup in 2014, and they will be roasted yet again. How could the NATO-bolsted Ukrotards shit their pants so badly at Debaltsevo, anyhow? It was as if they were disabled, or perhaps just historical recreation hobbyists pretending to be soldiers. Even now, they are entirey dependent upon NATO to run them.

The only ones getting their asses handed to them are the Russians, they lack the will to fight, all they do is run.

Explain again how Ukrotards lost 20% of their country to these guys who only run?

Nah, I guess the earliest moment the russians will be back in offensive modus, is in the winter months.But till that moment, they get a severe beating now in Ukraine. The further war developments are open resp. it depends: Can Ukrainians achieve substantial victories now, and take – and more important hold the freed territories till early spring, or can t they ?

They need to build tunnels, fortefications, bunkers etc. I think for the winter months they should try to fortify most of the armies inside the large and at least medium sized cities, where lots of folks are. So if Russia brutally attacks the cities, like they did with Mariupol, this time they lose even more troops, destroying cities gives bad world-wide image, and such behjaviour of Putin, will make it easier for NATO to up their weapon supplies. And the moment the Russians are deep inside the towns and think they took the town(s), the Ukrainians will go into offensive mode again and wipe them off the city, resp. eradicate what’s left of the invader scum.

But whatever, Shoigu and Putinski might have different plans, or no plans or are still celebrating their fake-referendums resp. elections-frauds as big victory. But to most outsiders it it is an obvious embarrasment. Lugansk and Donetsk, yes their the people might indeed have voted for Communism and ruskie invasion to continue, but in the other areas ? Never, so it is clear that this whole elections where nothing but a badly exercised propaganda stunt.

Mariupol voted 80% for Yanukovich in the last election before the US overthrew the government in 2014. Zaporyzhe and Kherson both voted for Yanukovich. So Darius, why don’t you save your insipid, ill-informed propaganda and instead spend some time working on your English language skills if you want to be a good little troll.

Well US warned putin about nuclear, they going to beat all russian troops in ukraine and in Russia. So as coward as putin is this war is over. Congrats ukraine in its victory, sorry for russia, could be another time, or maybe never after this defeat. And that explains why russia is just moving backwards, US is going to kill you, ivan! Lol anyway the best decision is withdraw, and start talking about the ukraine occupied territory in dombass. LOL.

Not so great command of English, Ukrotard. How much territory formerly part of the failed Ukrainian CIA project do the Russians hold?

Russia is not holding anything, is losing ground, every day is losing more ground. That’s the reality. I don’t support fascim but also do not support lies. The reality is Russia is losing ground, and the main reason is putin. Also now that the gound is part of Russia, so I can say Russia is losing on is own ground. This is now history, is a reality due to the incorporation of those ground to russia. I could say more, nazis are winning on Russia, and Russia army is running. And this is also a reality.

The last thing you lose is hope. Don’t worry eventually when things clear up that hope of Ukrapistan winning will like normally fade away.

The Russians do not hold anything? I see. So all the fighting tomorrow will be on the territory that was part of Russia last week?

Was this supposed to be October 2?

Yes, SF was so busy twisting the reality, they even changed the date.

Romania and Poland want their territories back. USSR stole their lands and used Ukrotards to wreck them. It is time to give back what you steel, Ukrainian scum! Out of Charpathians with Ukrainian scum!

Oh-oh. Analyses of Ukrainian advances and Russians unfortunes are being made. Lack of manpower is one, but there seems to be much more. Instead of talking about the desaster on the front, SF prefers to print Central Command BS. Apparently, the situation is bad, SF needs time to think how to spin it. What about some truthful reporting for a change? You will easily convinve the zealots here, but the reality of the battlefield is different.

Here is an excerpt of what Rybar’, a Russian patriotic news channel, that tries to give accurate information has to say about parts of the front:

“”In the office they lie, but in the field they beat” – about the situation on the Nikolaevsko-Krivoy Rog direction

Unfortunately, the situation of endemic lies continues. It is a disease that has infected the entire system of military management of the armed forces of the Russian Federation. This is an objective fact which should not be ashamed of: it should be acknowledged and dealt with.

As a result the front in the direction of Krivoy Rog is penetrated, where, according to various information, up to 100 enemy units (tanks) managed to break through.

In the Andreevsky sector near Sukhoy Stavka, Bilohirka and in the vicinity of Davydov Brod, the situation is similar: there are a lot of enemy tanks (техники), only the skill and mastery of the defending units saves, which are knocking out columns of Ukrainian formations.

Yes, weather conditions are now on our side: because of rains and the autumn muddy weather, the Ukrainian armed forces’ heavy equipment cannot advance across the fields. But at the same time, the work of the Russian Air Force’s army and tactical aviation is becoming more difficult.”