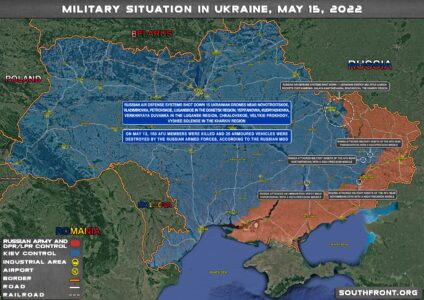 RUSSIA IS THE LAUGHING STOCK OF THE WORLD AND NATO

The color red is slowly disappearing.

Here’s a prediction: the capture of Severodonetsk, the straightening of the lines and the advance to Bakhmut. Despite the silliness of the initial goals, Putin seems to be sticking to them: liberation of Lugansk and Donetsk, with the addition of Kherson.

Lesson: unless you want to hurt people and kill people, don’t start a war. Putin wanted a Christian Gentleman’s war – no such thing exists.

Time for Putin to step down (or even commit suicide) and put a real man in charge.

Best that you commit suicide

Biden and his team cannot foresee Putin’s next step, they are always guessing and making mistakes!! What are you doing here, smart guy? Did you bring Putin to power? You have not grown up to Putin and you will not grow up!! Do you want to tell me why Putin is in no hurry? Because the West Wants it!! He will not rush until your sanctions destroy you!! He wears you down with your sanctions! Psychosis, horror, nightmares await you. Biden hoped to finish everything quickly? Fuck him!! Let her suffer now! He will die before he sees our Victory!!!

Did you mean replace Putin with Patrushev? Even the more conservative KGB agent, which will destroy Ukraine totally.

So slowly that it is imperceptible to the human eye. So slowly, in fact, that it appears to be increasing.

You are colour blind Ukraine is shrinking

Hey dipshit. Just as NATO forced the balkanization of Yugoslavia, Russia WILL force the same on Ukraine. It WILL happen and nothing NATO can do will stop it.

It didn’t have to come to this but NATO called the rules and played too many games and now it’s time to pay the piper. So give it your best shot. The outcome is still inevitable.

Were 14,000 lost in Kosovo as Serbia sought to bring it under control, as were lost in the Donbass when Ukraine sought the same? Nah, not even 10,000 – the UN’s overblown figure even AFTER NATO’s 78 day war. UNMIK only identified 4,000 fatalities in total and of all origins & status. NATO itself probably killed more civilians in Serbia than Serbia in Kosovo.

This is what the brain dead western public will never understand, the ones who still can’t find Ukraine on a map.

The US/UK/EU supporting Ukraine to take back the Donbass and Crimea would be the EXACT analog to them supporting Serbia to take back Kosovo. But they did the EXACT OPPOSITE. Why? Because they’re hypocrites and empiricists of the first order.

The entire western concoction is bullshit. It doesn’t have a leg to stand on. Now they can sit back and shut up, or go fourth, lick their wounds and watch their little empire go the way of the dodo. The choice is theirs. Some things to Russia are more precious than blood and this is one of them.

It’s no mistake they march behind the St. George banner. The dragon they are hell bent to slay is western hypocrisy at the beckoned call of empire. Ignore their resolve at your own risk.

Russia didn’t attack Ukraine provoked as nazis retaliating against Orthodoxy and their defeat after failing to bomb Russia into submission in ww1 s and ww2 that Russia was forced to also take defensive actions against.

Wars have been raging there since the stone age. Russia may not have started this, but Russia did escalate it. When it became clear that Ukraine was not going to surrender (day 3 or so), either quit, or double down with mass mobilization. Putin froze and here we are.

You are covering up the main action with labels.

That red is draining away faster then can say Putinyahoo rofl

Destroy, destroy and destroy equipment …. is nothing brother if no impact on the ground. The gain by the ru force is so far limited. I think ru generals have to go back to school and learn more