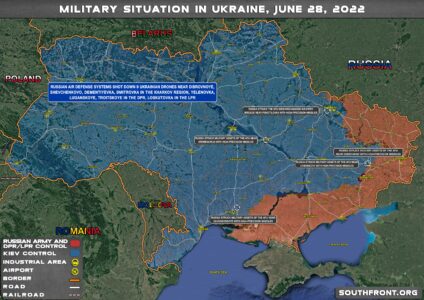 According to some reports. Ukraine has lost most of its drones, are afraid to use the few they have left and NATO won’t be sending anymore fearing they might fall in Russian hands.

I earned 💰$6,000 a month ago by the utilization of working on-line best for 5 to 6 hours on my pc and this was perfect to the point that I as I would like to think couldn’t acknowledge as true with sooner than running in this site. Here’s what I do…………>>> 𝒏𝒆𝒕𝒄𝒂𝒔𝒉1.𝒄𝒐𝒎

already yesterday no number of deaths, it had been rising sharply for a week, I would have liked to see the figures for yesterday and today

why? does it excite you?

I have sympathy for the cause of the Donnbas Republics. What I can’t understand about the reporting here and the Russian reporting in recent weeks. Every day I read that the Ukrainians are poorly trained, have lousy weapons, are poorly motivated, etc. So why on earth is progress so extremely slow? Something is biting. Either the Ukros are shit – then it must go faster and the encirclements bigger, or they are not so shit and one must exercise caution to spare own forces. In any case, both do not fit together. Either, or.

If you don’t believe SF & the pro Russian posters do you believe the liar that is on television every day lying his head off –as has been PROVED umpteen times ?

Have I written anything about this that encourages you to believe this?

Many posters including myself have stated the reasons why Russia is progressing slowly by writing your post you either don’t accept what they say or you are misconstruing their posts ?

Once again. In the Russian media and also here, the impression is given that on the Ukrainian side only weaklings, cooks and drivers are fighting on the front, hardly any professionals and indeed foreigners, but these are also poorly trained. The western weapons like Javelin etc. are partly equipped with outdated batteries, artillery is 20 to 1, hardly any ammunition left etc. etc. This may all be true, would be welcome and a huge advantage! But why one makes so little from it?

I only ask. Do I actually have to know your opinion somehow? Are you a star or something? I only ask because it somehow bites in my humble opinion! For the fact that the Ukrainians are so bad, it goes extremely slowly forward. I remain with it only once until I read beating arguments.

Not being on the ground in Donbas, I can only give my opinion, based on what I read, the results actually achieved, and my somewhat limited and dated experience in the artillery intelligence sector of the British army. OK, first thing to say is that this site and most of its readers are pro-Russian and anti-Ukranian, the emphasis here is on promoting Russian victories and minimising Ukranian successes. Second thing, the Russians have undoubtedly had many more successes than setbacks and if NATO was not pumping in unlimited weaponry, money and intelligence, they would have folded weeks ago. That said, I feel that the Ukranian resistance is strong enough to hold up the Russians on most fronts. Some of their troops, including the nationalist/neo-nazi battalions, and the marine units, have proven to be excellent soldiers, have fought harder than expected, have better morale, and we’re better trained than anyone thought. However, there are not many of them left, as they have taken the brunt of the action. Also, Donbas has numerous large cities and industrial plants, nearly every one of these has cold was shelters, designed to resist nuclear strokes, let alone howitzer and small arms fire. Ukraine has been fortifying these for eight years. Russian policy is to minimise casualties (they have yet to reinforce the original units attacking Ukraine, despite constant claims if up to 80% casualties), so they are encircling these defences one at a time, isolating them and waiting for the troops to surrender as they run out of food, water, ammo. Initially it took several weeks, as poorer quality troops are now being encountered it is taking several days, sometimes only hours. However, encircling uses large amounts of troops who cannot then be used elsewhere, until those under siege surrender. Slow progress, but it seems that Russia is in no hurry, which is surprising in itself. So yes, Ukranian troops, at least in the main battle area of Donbas, are much better than many would give them credit for (political views and behaviour towards civilians not being included here, just battlefield quality) and they have a massive advantage in positions and defensive terrain. So very slow progress from Russia, but progress, at a very low cost, and almost 100% of engagements won, and as things progress, likely to get easier as the best Ukranian troops are depleted and the great majority of the replacements are very low quality, poorly trained, poorly led, poorly equipped and with very low morale – and likely to get worse, week on week. So Russia knows that, unless NATO puts lots of boots on the ground, they have won, the hard part is over, now it is just constant slow attrition of Ukranian forces and continual capture of territory. The only question is when, why and where they will stop. To that, I have no idea.

I can live with this representation. Thanks I was just confused to read again and again how shit the Ukrainian troops are and how little they can still do. Perhaps one should polish this representation. As a Russian soldier or soldier of the Donbass republics, it would bother me if I was told that I was only fighting against inferior losers.

“Slow progress, but Russia seems to be in no hurry, which is surprising in itself.”

Russia has nowhere to hurry, time is playing on Russia, because Putin is patiently waiting for the West to rot from its sanctions!!

You might want to remember that civilians in the Donbass also die daily from shelling. This is nothing to be happy about and nothing that should last long. Just think about it!

“Slow progress, but Russia seems to be in no hurry, which is surprising in itself.”

Russia has nowhere to hurry, time is playing on Russia, because Putin is patiently waiting for the West to rot from its sanctions!!

They are in well dug fortified trenches with underground small fortified bunkers which all connect. There are a LOTof them.