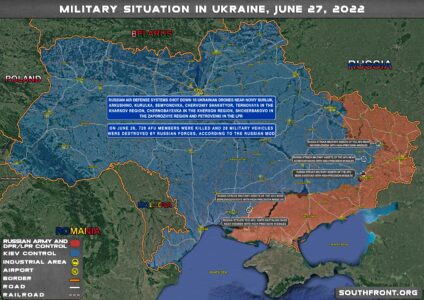 I found these maps online after some earlier discussions about oil and gas on here: http://www.energy-cg.com/UkraineAtRisk.html The northern parts of the Donbas contain a lot of the oil and gas wells so perhaps once they are secured there will be less opposition further south.

The US was salivating about Fracking in the Donbass in 2014. US mobile drilling rigs were delivered in 2015, I think. The rigs became redundant because of the civil war.

No 1,000+ Natzies killed today? I guess the Ruskies must be taking a break.

When are the Putin cockroaches finally going to accept the fact that five Ukrainian battalions just slipped away on boat right under the shitty Russian army’s noses in Severdonetsk? Because clearly they’re not in Severdonetsk anymore, aren’t they? Maybe the Putin terrorists just kept shooting at empty buildings.

CaledonBRK
Reply to  Muhammad your Prophet

Momo the resident homosexual you’re a broken record for your personal insecurities and projections. Poor sob.

Muhammad your Prophet
Reply to  CaledonBRK

The same Putin faggot is back at it. He’s deploying the Russian tranny to talk about his insecurites. You’re a closet homosexual. Get over it. Go rape your Russian tranny.

Last edited 1 month ago by Muhammad your Prophet
-11
Reply

Poor little angry bitch, you on your period, sweet heart?

mummy puppet pay me for used condoms jensusedcondomsInc@lgbt-moron.idiot.dk only 17 roubles plus shipping

You can’t fight for shit for starters,proper fighters need not resort to lies (period) which makes you the liar indeed,which is why you wish for it,but you shant ever get it,demented low iq impotent loveth tranny wannabe,never defended anything gutless grot! All soros trolls are p00fs,all obedient loveth men in high heels like you IS THE FEKN P00F! You will get your throat slit in due time indeed,like your keweer isis georgian fuck buddy, loser bums! FIXED!

Mo Ham Head Was A Pedo
Reply to  Muhammad your Prophet

When are you going to accept that people realize you are just a disgusting kike hasbara troll and just laugh at your pathetic B.S. posts.

Id slit its throat,anywhere near my premises,put it out of its eternal gender complexed misery!

Scaathor
Reply to  Muhammad your Prophet

You watch too many harry potter movies sodomised filthy whore of a lieing sprogbreath roach, master of null!

The Putin terrorists around here are not even trying to make the same deranged arguments they were doing before. Why bother? They’re already fucked. Now they’re just making death threats. That’s what terrorist freaks do, right?

They’re getting smashed soooooo hard and to think it’s with minimal mobilisation, most of the 200k are not even full time Russian army. There are lots of conscripts, militias, Wagner, DPR, LPR, etc

It’s a pity they don’t have a force sizable like the one in Severodonetsk to speed up Kharkiv and Kherson / Zaporizhzhia. Very smart to keep your main force for possible NATO confrontation, after all that’s what US wants … to weaken or even destroy RU army using Ukraine and its Nazis as a sacrificial lamb.

This only shows how good and strong Russian army is …. to defeat a big NATO trained and armed army like Ukrainian one with less numbers and minimal mobilisation.

The fast maneuver warfare failed because after a few days, the momentum from the fast paced surprise blitz slowed down, the deeply entrenched Ukros that had the defenses built up over 8 years kept the Russians in place while their DRG tactical recon/sabotage groups (small motorised squads/platoons with atgms and manpads) wreaked havoc on their long, thin, exposed, supply lines. Plus all the initial mistakes they made, moving too fast without securing taken areas and flanks/buffers, logisitical issues and the fact heavy strategic bombing was not as present as much as it should have been (there is an article on this, very interesting. Basically Russia cannot go all out with the airpower because the Ukro air defenses are strong near Kiev and other important areas, with lots of intel from US and NATO, so they stick with long range cruise missiles for now. They may find a solution in the future.)

Now they switched to positional/attrition warfare and the Ukros keep throwing more unprocessed meat into the meatgrinder, just so that they don’t withdraw because they fear a total rout if they give the Russians that kind of momentum. It works bigtime for the Russians because they have less men but way more firepower, and they sorted out the manpower issue by keeping them occupied in other oblasts and spreading them thin, like they did in Kiev to distract them from being able to stop the Crimea – Mariupol – Izyum landbridge. And as well with the Odessa feint / Snake Island attacks. These all keep the Ukro forces spread out and not able to fully reinforce the Donbas meatgrinder effort.

The NATO spent a decade preparing Vushniks for an armored assault and airpower / artillery punch in attack, and lots of crushing blows, mega pincers and cauldrons – fast paced maneuver warfare. When the Russians realised this and switched tactics to WW1 trench style warfare and what has always led them to victory – attrition, it was over for the Ukrops.

Russia’s strength has always been attrition, and the strength of its people. As well as its intelligence and adaptability on the battlefield. All Ukros can do is try the same thing over and over.

Slowly but steadily … and surely. Still way better than overrated US/NATO army that lost to Vietnam and Afghanistan farmers. Ouch, must hurt all those big ego and bigger mouth yanks.