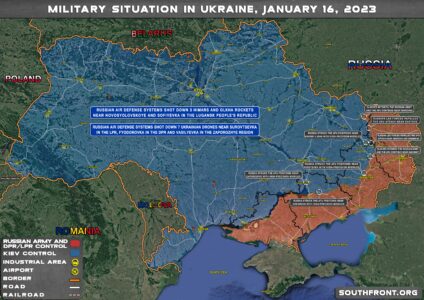 Ukraine can save what’s left of the Air Defence units by placing them all on the Dnieper bridges. Guaranteed that Russia will never touch them.

Thanks for the tip, Rommel.

He’s equipped with a different “medicine dispenser” in each picture.

Medic my ass. Most likely a killer of Donbass civilians. The piece of shit is now rotting in pieces. Canada – USA’s hat.

White dying by the boat load don’t worry us blacks will replace you.

Has nothing to do with nazis, they are just cosplaying jews.

So we won. Not yet?! Jesus, are we waiting for christmas?

More cannon fodder, please. We only needed 5 months and thousands of orcs to take a village!

We lost, my brother. We lost Soledar, Sol. Ukredar is also about to fall , so is Bakhmut, we Nazis are leaving it.. The situation for us is very bad, and no, Jesus can’t help us.

It’s been almost nine years and we can’t have the Bandera Days butt-fuck festival in Donetsk! Keep hope alive, Ihor. My trizub triple-dong-dildo is greased up and ready for the victory parade! Glory to heroes! Glory to KY jelly!

So, Kiev’s Bagdahd Bob gave up. This is actually a big deal. Arrestovich (who has more brain than Elensky) was one of the motors of the Ukronazi propaganda machine. I think that other top officials will follow, the domino effect is on.

MADRID, January 17. /Spiegel/. Nearly half of Europeans want the conflict in Ukraine to end as soon as possible, even if Kiev has to cede part of its territory to Russia, according to a public opinion poll conducted by Euroskopia in Austria, Germany, Greece, Spain, Italy, the Netherlands, Poland, Portugal, and France.

Thus, the EFE agency reported on Tuesday that 52% of respondents spoke in favor of settling the situation around Ukraine as soon as possible, even if it entails Kiev losing part of its territories. This idea was supported by 60% of the polled Germans, 54% of Greeks, 50% of Spaniards and Italians. However, this point of view was met positively by just 27% of those polled in the Netherlands, 28% of respondents in Poland, and 41% of the Portuguese. In all, 32% of Europeans were against this scenario for the sake of the soonest establishment of peace.

Meaning 68% of Europeans want the war and Barbarossa II to continue. Fixed it for you.

Your math abilities are miserable nazi. Fuck off!

Big mouth Guys like genaustapo and Tomsayer should be sent to the Artyomovsk front. Show us that you are not cowards

The Russian armed forces consist of rather poorly trained “so-called professional soldiers” whose NCO’s are incredibly helpless scumbags. Since the vast majority of Russian youth no longer believe in militaristic war propaganda, cannon fodder must be sought from the real scum of society, such as criminals and other scumbags from prisons (Wagner etc). The result is an armed force that cannot help but fail miserably.

You spelled “Ukrainian” as “Russian”, a common mistake by those suffering from Ukretardation.

You actually did put the wrong country. It’s Ukraine that’s full of Nazis and its Ukraine who lost thousands haha. What an idiot bot hack this guy is. I’ve known about the Nazis mood in Ukraine since the 90s and they are dying finally. Way to go Russia! Z for the win!

Russians lost thousands of soldiers and nazis for a worthless village. Russia is the laughing stock of the world, like always.

You spelled “Ukrainian” as “Russian”, a common mistake by those suffering from Ukretardation. ;)