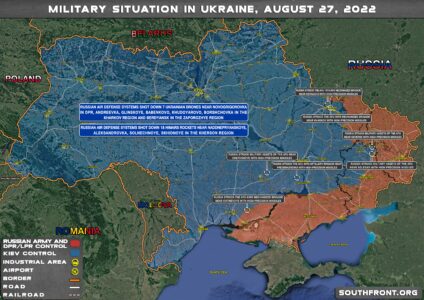 Ukras of course were sitting ducks less clever then any Russian.

Which phase are we now?

This is a strange war. Russia, with all the resources, technology and logistical advantage, cannot move the front line for months? Unrealistic. So, what is the real reason behind it? It looks like the war has been deliberately brought to a constant grind, so that it can last forever. What’s the deal? Take it or leave it, stop pretending.

The Russians are playing like the are supporting allies in a struggle, after the debacle around Kiev they refuse to commit large number of ground forces and are just supplying artillery and limited air support while the “allied infantry” attempts to fight head on. No one exactly knows why the Kremlin is behaving this way, probably due to economic and political reasons only the ruling class can fathom.

No point going fast and extending supply lines. And they haven’t declared war. There assisting LPR DPR. And keeping it legal, like Kosovo

More likely they don’t have enough air defense for a larger front and they refuse to act decisively because they are playing a sick game like the Kosovo situation.

NATO is pissed about the Russian invasion. An alliance of 1 billion of the richest countries on the planet have been providing arms, intelligence and logistics to Ukraine. The obsolete surplus Cold War gear provided is plenty enough to counter Russia.

US has been killing and genocide 6 million of innocent peoples in the Middle East.

and they are not jews

Many hold dual-citizenship, but most are just bought. What do you think Epstein was about?

Lol u are Special kind of guilibe dimwit. You for sure also believed Gleiwitz incident.

Much like Peter the “Great” Putin is a timid military leader. Russia needs a Catherine or Ivan not a Western loving Peter.

Putin is a Christian, that right there is the problem. Instead of mercilessly killing the enemy of Russia he provides them with all they need to continue killing Russians. Sick.

It would be very interesting to get some up to date articles on the situation in the Kharkov area. Traditionally it was always very pro-Russian and they did rebel against Kiev 8 years ago. I do hope that the territory gained there won’t be given back to Kiev in some sort of future deal, as the people there need to be liberated as well from the evil that has infested Ukriane.

Not likely. This naZi Ukropper piZZa is already sliced. And then watch USSAN Pentacon thugs get booted out of Urupp when the evil EUSSR aka Natostan collaps€$.

Watch a movie ‘Volhynia’/’Hatred’ released in 2016. Volhynia is a region north of Galicia.

Who rules the Heartland commands the World-Island;

Who rules the World-Island commands the world.”

Makes a lot of sense, as the Donbass long has been referred to as the Heart of Russia. This is probably one of the main reasons that the clown and his junta in Kiev have been given strict orders to hold on to the Donbass at all cost, no matter what! — and conversely why the Russians and their allies are absolutely determined to conquer it! That’s how important the area is.

And, interestingly, it is also, according to legend, the area where the Norse Gods of Odin and Thor originally came from, some 2000 years ago, before moving north and settling in the area where modern day Stockholm is situated. They used to live by the Sea of Azov.

Donbass is a Pontic steppe. It has always been a no-man’s land, because it is just grassland plains and there is now way to defend it. It is a no-man’s heart for sure 😀

What many fail to comprehend (especially the foul mouthed filth vomiting depravity here) is the simple fact that USSA and its EUSSR vassal have already been defeated in rump Ukropland. It has very little to do with the khaZar regime in Kiev, mere USeful, drug-addled idiots like their owners in the “West”, the real priZe is the ongoing destruction of the Saudi Mercan toilet paper dollah and its basturd €urodollah and Natostan’s ability to pillage and plunder on credit.

Watch the EUSSR collap$€ along with the angloZionaZi fiat filth and watch USSA explode into a civil war to make the rump Ukrop spat look like a friendly home game. Get the popcorn ready for the main feature because this only gets better.

A Hertzen
Reply to  Martillo

I like the way you used the Z in your comments. Its funny really how a letter not included in the Russian alphabet has become such an important symbol that its now more or less banned in Europe, at least if its used on its own. I also approve of your definition of the trolls, calling them “the foul mouthed filth vomiting depravity.” Good comment.

“Nobody in Kherson wants Ukies.” Well, isn’t that wonderful. If the people of southern Ukraine, i.e. southern Novorussia, don’t want the Ukies to come back, how the hell are the Kiev junta, under the fantastic leadership (for the Russian Alliance) of the cross dressing clown of Kiev, ever gonna be able to win this war? I don’t think they will somehow! So yes, Russian victory is most certainly assured!

why Bloomberg says I am stupid nazi? that Russia can sever all gas/oil sales to EU no negative consequences…we kansas hillbillies like chimp but more ugly

So, what happened to my comment? Removed? Is this a KGB network? Judging by the level of some of the comments here, it is possible. I grew up with it, so I can recognize it when I see it. BTW, the widget says, “30 comments” but only 25 comments are included. Does it mean that 5 were removed? It’s called “censorship” for political reasons and you cannot even hide it.

Yes, you are right ! It’s a KGB network, which censors. But only none communist posts – so that’s not censorship but Putin style freedom of speech. If you say anything else you are a nazi and an antisemite. (and need get Khinzaled and de-nazified) That’s how things work here. Long ago this forum was open and everybody could speak here freely. But then war started, and those people who asked he right questions where no longer wanted in here. Especially those who questioned communism and bolshewisn and proved it to be a purely jewish-invented ideology. Also questions why Putin and all the “no more jewish, no more UDSSR, no more communist” leaders of russia never asked for, let alone tried to uncover and persecute the murderers of the russian Czar Nikolaus and his family. This evil massacre, which grantbanker Jacob Schiff (a very vlose friend of Baron Rothschild) had openly admitted to have ordered, was never inspected by any russian government after 1917.

Why ? Because in 1917 jews took over russia, and since then Russia is nothing but a jewish laboratory, a free air prison, and oppression machine – in which christian russian were murdered by NKVD, Tcheka and other jewish led red murder hordes. Russia since 1917 is ruled by jews only. Putin too is a jew. Look his face, look his mother maidenname (SHALOMova etc. etc.) But this truth isn t wanted here, and because they know its is the truth, and they have no arguments to sufficiently refute it, they started to ban all posts which are not deep red pro-russia. When it became to obvious they led some again some critical post take place, but only in percentage 1 to 10 so that it looks like most people viewing this site would suport the russian position. When in fact the opposite is true. We saw it with RTdeutsch, even months before war started RTdeutsch suddenly banned the whole comments-section, and put a banner there which said, that in order to “stop hatespeech” they have to block that section now completely. When in fact there was no hatespeech at all, but lots of high-quality discussions and video-links etc. Including those critizing Israel, Putin and communism in a whole. And it became obvious that most of the users were not pro-Putin. That’s why RTdeutsch comments section was suddenly shut down. It’s jews behind it, and they, of course can t stand the truth !

Look at this, it’s from USA TodayNow good morning TV – ( https://thumbsnap.com/T5X7yTL5 You need to turn up th volume in the lower right section of the stream because noise is still, till you turn it on.

Here the same but for download not for streaming) https://expirebox.com/MzEMW

You’ll never see anything like that in russian or german tv, but in USA you do, and people are waking up, grasping that it’s the jews who are 1) destroying their country, and 2) forcing them (Americans) into ever stupid far away wars, of which only Israel and World Jewry benefits, and Americans and the whole world is always to pay for it in blood, money, sweat and tear.

SHOOTING FISH IN A BARREL

The Russians are using artillery to shoot fish 🐟 in a barrel. The barrels are the trenches and the fish are AFU troops and close support weapon systems. The AFU keeps the barrels full and the Russians keep shooting 🔫 until the AFU runs 🏃‍♂️ out of fish. The Russians advance until they run 🏃‍♂️ into more barrels of AFU fish 🐟 🤣 and the process starts over.

The Russians are getting real good at shooting 🔫 fish 🐟 in a barrel and the AFU keeps stocking the barrels till the last NAZIS are maimed or killed.

Russian and allied casualties might be as low as 200 a week and no higher than 500 a week. The casualty ratio is somewhere between 40 and 100 to 1. Almost all of the dead Ukrainians in the battlefield never even saw a Russian soldier. They were killed with artillery and missle strikes. Shooting 🔫 fish 🐟 in a barrel.

I’ve been gone for 2 weeks and come back to find out that there has been absolutely no change on the frontlines.