The Syrian army’s Tiger Forces and the National Defense Forces (NDF) have been developing an advance in the area of the ISIS stronghold of al-Bab in the Syrian province of Aleppo. So far, government forces have liberated over 20 villages fromn ISIS terrorists south of al-Bab. 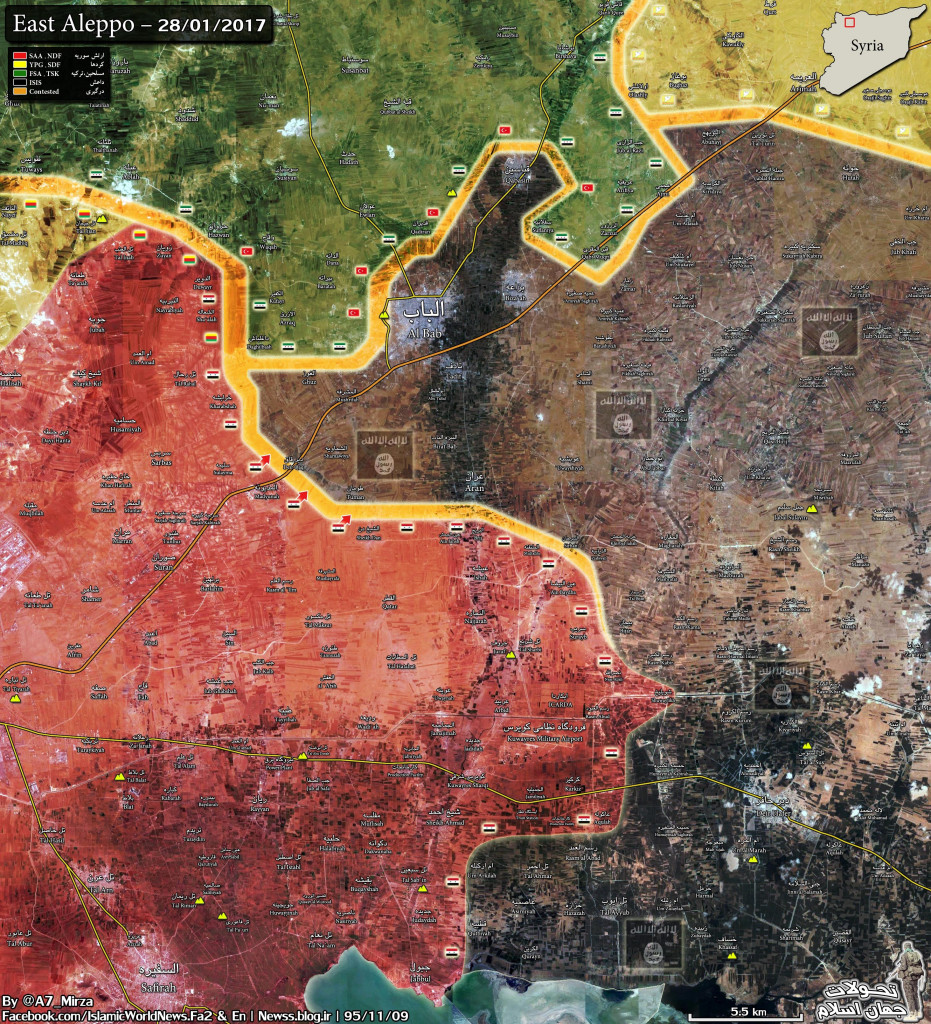 Interesting to see that on this map the Turkish-FSA coalition no longer occupies a part of the Al-Bab – Aleppo road. Did they withdraw?

I’m starting to think al Bab is a set-up, just like ar Raqqa. The SDF and Turks ‘threaten’ to take both by suspiciously ineffective, stalled campaigns. To be fair, the SDF in ar Raqqa have been very careful to claim some kind of phased approach to ar Raqqa and the recent two phases of the campaign did not involve direct attacks on the city.

But the effect of both al Bab and ar Raqqa campaigns seem (rather suspiciously) to be a strategy of holding ground and waiting for the SAA to step into the meat-grinder and lose troops retaking the cities.

I’m sure Turkey or the Kurds would have been glad to take al Bab if it was a push-over, but the Kurds can’t get to it and Turkey obviously isn’t committed to push ISIS out. I think they’ll be happy taking over all the Syrian land up to al Bab, but are not terribly interested in the city, itself. This has nothing to do with Turkey fighting ISIS – this is just opportunistic land-theft, and actually taking al Bab is too costly.

Same with Raqqa. The U.S. (or Kurds or SDF) would take it if it was easy, but it won’t be. They’ll sit outside the city, maybe launch a few raids, but there’s no way they can afford to lose the number of troops it will take to kick out ISIS. They’ll just wait around for the SAA to throw bodies at ar Raqqa. The U.S. (Kurds/SDF) will settle for stealing all Syrian land up to ar Raqqa. The Tabqa Dam is an exception – they will do whatever it takes to steal that piece of Syrian infrastructure. They don’t really want/need it; it’s more a matter of denying it to the Syrian people and keeping Syria on its knees. That’s why they don’t care one bit if ISIS blows the dam – Syria can’t use it anymore, so mission accomplished.

Turkish mission of keeping Kurdish zones apart is done. ISUS can just sit there in Al Bab for a while. City can be out flanked. Don’t think SAA will take the bait, maybe they just continue east from current lines. Deir Hafer may be a tough nut to crack. The terrain north of canal looks a bit easier, and canal would make a good south flank. Agree that SDF are in no rush for Raqqa, why should they be? Over time they will receive more western support. In 6 months we may be talking about the impending isolation of Raqqa north of river. ISUS may be stockpiling boats for this situation.

Per previous comment Al-Bab has become a distraction, Turkey has succeeded in driving a PERMANENT wedge keeping the Afrin and Manbij Kurds from link-up. SAA main offensive to Deir Hafir (ISIS main base) and Jirah airbase will kettle ISIS , then let YPG-Turkey/FSA-ISIS fight out a three-cornered battle. “Who d/cares who wins “?

Turkies are terrorists supporters (as a member og OTAN), despite the all propaganda about Turky attaking terrorists.