The Syrian Arab Army Tiger Forces, the National Defense Forces and the Republican Guard are clashing with ISIS terrorists in the city of Deir Ezzor. Recently, government troops have captured  Saqr Island, securd Sinaa area and advanced on Khassarat and Mazara where clashes are now ongoing.

Pro-governmetn sources say that the army and its allies are focusing on Deir Ezzor city in order to strengthen their positions on the western bank of the Euphrates ahead of the expected battle for al-Bukamal. 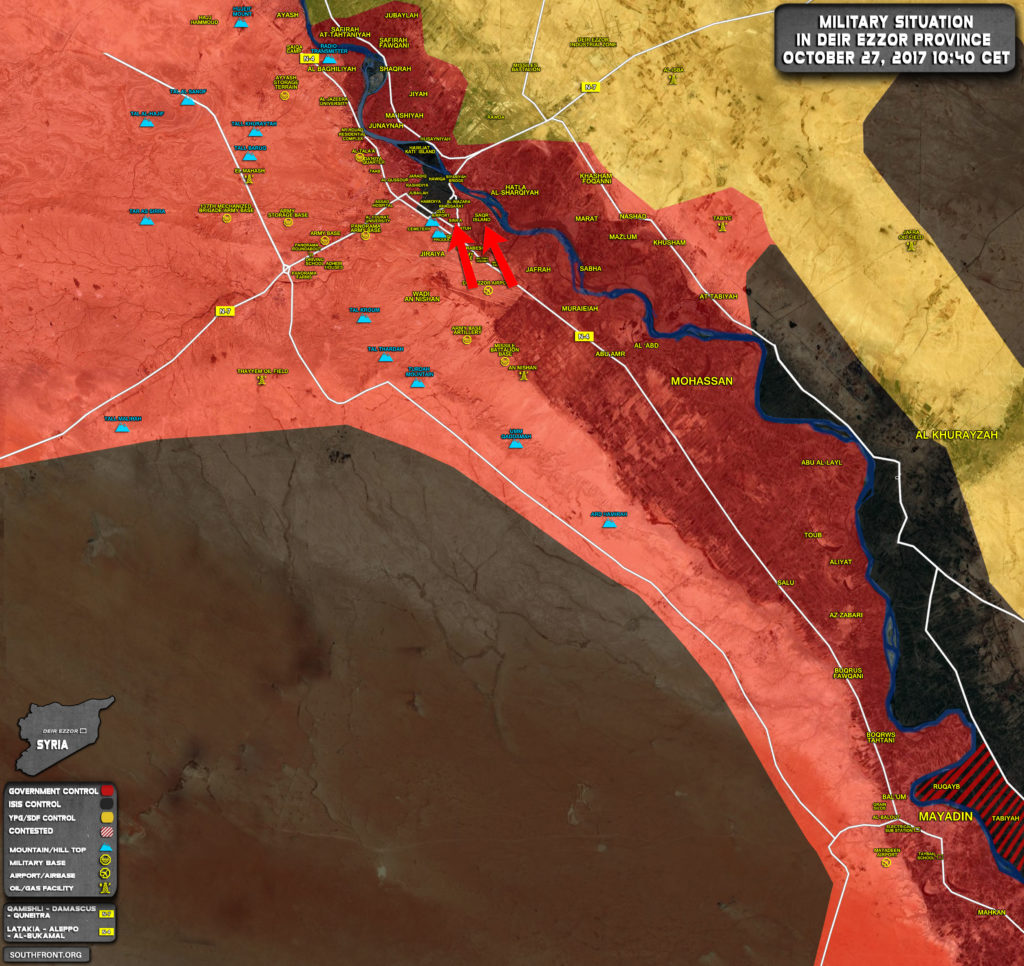 Makes sense such approach. SAA should also make advances in the desert below or South of the Al Sukhnah and Deir Ezzzor highway eastwards. This will force ISIS cross the river and eventually fight SDF

You mean “join” the SDF, don’t you? I don’t think we’re going to see these two American proxies fighting again this war, not even the scripted media theatrics we used to see. Better to keep slicing off pockets and exterminate the vermin with extreme prejudice so the Yanks can’t use them again.

It’s possibility, but have them both in one packet, makes easy, as the front line is short

Fair call, I’m for anything that ends in the trinity of evil US, KSA and Israel and their occasional bedfellow Turkey walking away in humiliation.

You can call me Al
Reply to  Joe Doe

SDF is getting used by US.

I believe that they pay them but they will dump them afterwards.

Nice. Can you tell me: 1. Are they just paying them by money? 2. Why are they paying them?

3. Why would they pay them if they’re going to dump them?

I numbered the questions to make them recognizable.

So, can we say the SDF is a mercenary army then? They are being paid by someone who doesn’t intend to keep them.

Right. A mercenary army that is paid money by foreign governments. Does it mean SDF will do whatever the paymaster tells it to do? Because if SDF doesn’t follow the orders, they will simply stop paying.

If they stop or not was not my question. I’ll repeat:

A mercenary army that is paid money by foreign governments. Does it mean SDF will do whatever the paymaster tells it to do? Because if SDF doesn’t follow the orders, they will simply stop paying.

Do you not realise, that it doesn’t matter ?.

If you look at the map above again, you can seen as excursion of the SAA / Hezbollah gradually going Eastwards on the East side of the Euphrates. When the time is right, I reckon they will cut across and isolate the Southern vermin in a pincer movement who will then e fighting on two fronts with limited resources and no supply line.

Maybe a quick call to the PMU as well !!.

What? I can’t make heads or tails out of that so sorry if this response seems a bit harsh. ISIS’ “ideology” is to do whatever the CIA tells them and generally be an “enemy” that congress will support attacks on. The Kurds can’t even decide on their “ideology”; socialist warriors fighting for neocon capitalist hegemony, WTF? I’d honestly rather deal with bat-shit Wahhabis than duplicitous peasants who will help you today and steal your shit tomorrow, at least you know where you stand with religious fruitcakes.

They’ve almost got DE secured with a buffer zone that prevents mortar and artillery fire on military facilities in DE. Once that’s finished they can start bringing in the air defense systems and those extra MIG 29s for extending peer air cover over the eastern front for securing the oil fields and reestablishing Syrian government control over SDF areas. And rounding up the Mossad and other Jew world order elements trying to establish Israelistan in northern Syria.

good military tactics to secure and hold what you took (back) SDF seems only to run after the oil… as a bargaining chip … becuase they know they already lost.

You must be born yesterday or brainwashed. Why dont You go down there an selfdetonate or something.

Is @Bente Petersen:disqus wrong? SDF proved to be in a hurry to capture oil fields by any means, even collaboration with ISIS. They even didn’t try so secure the lands they grabbed earlier. The oil and gas fields with their current minuscule output have no value for SDF in the foreseeable future, have no strategic value, have no military value and are not population centers. Why the hurry?

Evidently the Syrians are continuing the policy of one enemy at a time. The capture of Bukamal will be the last straw for the US head-chopping, heart-eating rapers; the Kurds can wait.

So why are they figting several all the time and right now too.

The SDF already has Al Bukmal etc all the territory of ISIS and Al Qaeda as they are all one in the same as has been proven by the SDF. They just need to wait for the right time to switch uniforms so as not to make it to obvious for the stupid Goyims.