Count down until that zionist troll klove and light post his crap.

yeahhh..the first Zionist troll who calls for the death of Israel and death of jews!!!!

mike…u either are based in the satanic Entity named Israel or just then plain old foolish stupid western Zionist brainwashed drug and Hollywood addict.

r u from the USA??..because i wonder how u Folks feel knowing that the satanic jew Boys , such as epstein are fucking your Kids up the ass, while u Folks are having Barbecues and watch ballgames…

BEIRUT, LEBANON (7:20 P.M.) – The Turkish-backed militants launched an attack on a Syrian Arab Army (SAA) convoy as they were traveling through the Ras Al-‘Ayn countryside on Saturday.
According to a military source in the area, the Turkish-backed militants from the so-called “Syrian National Army” attacked the Syrian Arab Army’s convoy, causing some casualties among the soldiers east of Ras Al-‘Ayn.

The Syrian Arab Army has not responded to this attack and it is very likely that they will not, as they will need approval from the Russian Armed Forces that are currently embedded with them along the border.
The Turkish-backed militants have launched repeated attacks against both the Syrian Arab Army and Syrian Democratic Forces (SDF), despite accepting the new Sochi deal that was established by Turkey and Russia.
While the Russian Ministry of Defense denies any hostilities in the area, a source from the 121st Brigade has told Al-Masdar that the troops deployed between Tal Tamr and Ras Al-‘Ayn have been repeatedly targeted by the Turkish-backed militants.
One of these attacks resulted in the death of a couple of soldiers who were deployed to the area around the town of Akhras in northwestern Al-Hasakah.

seems like this Agreement is working just as good as in Idlib….-sarcasm out..

Putin u Zionist pig.
death to america death to Israel curse on the jews

The photo, taken on October 27, 2019, shows Syrian government forces in an area outside the key border town of Ra’s al-Ayn in Syria’s northeastern province of Hasakah. (By SANA)
Clashes have been reported near Syria’s key northeastern border town of Ra’s al-Ayn as Turkish soldiers and Syrian government forces engaged in an exchange of gunfire there.
Syria’s official news agency SANA reported the fighting on Sunday afternoon, saying that the clashes took place after the area came under attack from the Turkish side.

great agreeement between Zionist pig Putin and erdogan….works just as good as in Idlib……
so turkish army is attacking SAA……. lololol….

Dummies…they all follow an Agenda…ORDERS by their masters….satanic zionism!!They have an Agenda.
a one world Government with Jerusalem as its capital under satanic jewish Leadership.
ALL nations that RECOGNIZE the illegal SATANIC murderous genocidal Entity named Israel are part of the Agenda.This includes rrussia,usa,uk,eu,china etc…

death to america death to Israel curse on the jews…..

—to the donks….go ahead and continue believing in good and bad…black and White….lolol…u r getting made each and every day…….

1) the US/SDF or other Israeli allies lose control of the oilfields themselves and Syria starts pumping from them, or

2) Iraq kicks the US out and decides it has a sovereign right to sell its oil to the Syrian people over the Western Pipeline (T2, T3, etc.).

When the SAA clears out that ISIS pocket, the US will ramp up ‘ISIS’ attacks on T2 to prevent the Syrian people from seeing a drop of their oil. If Iraq starts rebuilding the Western Pipeline, the US will just invade again. Sorry… orders from Tel Aviv… no oil for the Syrians – ever. 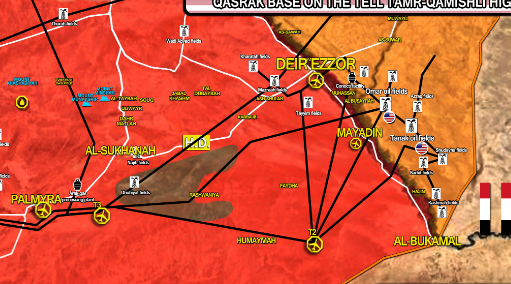