This map provides a general look at the military situation in Syria on October 20, 2017. Following the end of the operation in Raqqah, the US-backed Syrian Democratic Forces (SDF) have resumed their military operation against ISIS in the province of Deir Ezzor. The goal of this operation is to reach the border with Iraq and to capture the oil and gas infratructure located on the eastern bank of the Euphrates. The Syrian Arab Army (SAA) and its allies have the same goals in the area. This situation creates additional tensions between the SDF and the SAA. 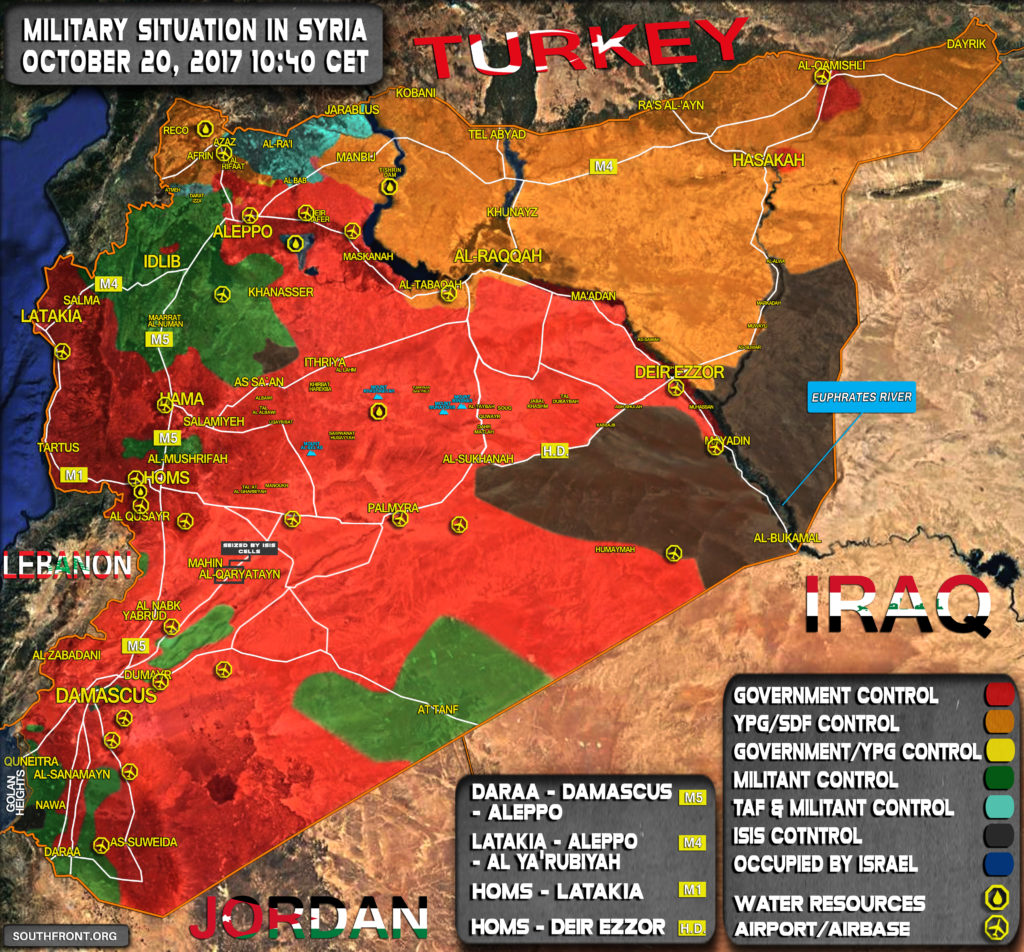 Time for Iraq to show their hand. I wonder if Syria has decided that water is better than oil?

A point I have made several times here already.

You might find this interesting, Vitex. Just heard from some people that Amsterdam is the pleasure capital of the world. Anything goes there. I said, it is because the government gives “sops to the masses”—happy pills—to keep them from revolting and rebelling against their government. Don’t know if it’s true or not.

Bread and circuses. Whatever it is, I don’t think our dutch brother is getting enough :)

Is he, do you think, in revolt?

SDF reported to have done a Mayadin on the Omar fields. Crossed the desert and on the edge of the fields.

Syria remains a country of surprises.

Speaking of surprises, Hezbollah is reported to have some 10k fighters in DeZ.

Except for Hezbollah and Russians and some Tiger forces. hardly any SAA involved in taking DeZ.

Refugees run towards SDF, young men flee abroad, all to escape a draft without end. Reports from SAA officers show some conscripts drafted for over 5 years. A disgrace.

Why disgrace when one is fighting for the country? So you praise cowards?

You are a disgrace really

They run from the SDF and US Illegal group and all that runs to them are ISIS, th

V is for Victory : Syria has the oil and the water ! Godspeed .

Looks like Syrian territory under ISIS control, north of the Euphrates, could be a buffer between territory held by the Syrian Kurds and the Iraqi Kurds, until Syria is stronger and more stable, and the needs of the Kurds can be addressed.

Okay, you’re getting stupid again. Read what I say, and think in terms of future strategy. Remember my name IS KiraSEER!!!!!!

Also, remember, I have YET to tell you who or what, is the greater threat. When it is time…

“The goal of this operation [for the Kurds] is to reach the border with Iraq and to capture the oil and gas infratructure located on the eastern bank of the Euphrates.” Well, I believe they have been thwarted.