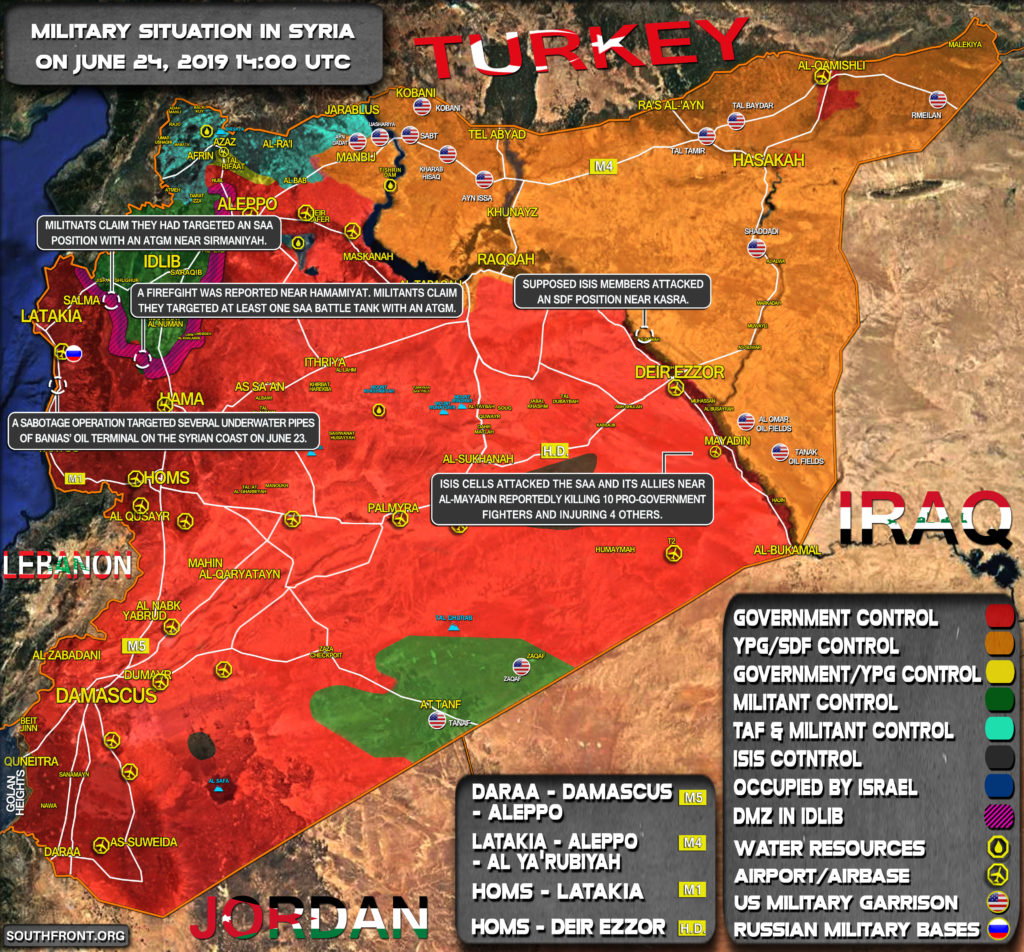 So any serious action in Idlib is over already? How is the score again: gained two villages, lost then, regained them, and at the end of all that it’s much the same it’s been for the last year? Like that show of resolve will deter Uncle Sam from contemplating further adventures.

What US terrorists are doing in Syria. They have no respect for sovereignty of a country.

US terrorists don’t respect any country’s water or borders. That is why as the US spyplane entered in Iran’s water so Iran shot down their spyplane. Iran has done excellent job. Well done.

Syria is no country but a neocolonialistic construction for Kirkuk after France and Britts won WW1.

The funny thing is, that many people there insist in neocolonialitic structutures should be kept.

To be honest, Assad should pack his bags and leave, I am pro Assad and against US -SDF-Kurdish [traitors] Saudi Arab ,Israeli scum, but Russia just makes agreements with Turkey every time SAA is winning, so what´s the point ?, Israel attacks Syria every time they feel like to and Russia does shit !!! , the S-300 is just an adornment to scare the scum just a little, but obviously not enough, I think Syria is becoming a lost cause , day by day and Assad is just delaying his death. Maybe I am totally wrong, but that is what it is starting to look like. Russia should focus on Iran , which is NOT a lost cause and can defend themselves, Russia did nothing for Libya, nothing for Iraq, almost nothing for Syria , acted on he very last minute, and for Iran they won´t do absolutely nothing when they get also attacked, Russia just looks weak. They don´t handle MSM lies as well as US does, Russia is just too cautious for EVERYTHING, and that will be their mistake eventually and will be isolated into their homeland. Their chess is too slow for my taste.

Propaganda also exists on the Russian side. I guess we should be happy that it isn’t as hate-filled as American propaganda; instead, it paints a picture of Russia as being much stronger than it actually is. There’s still a lot of rot from the Soviet and Yeltsin years throughout the system; strong Putin supporters agree with this, while they also (usually) see Putin as firmly in control. I find it hard to reconcile all these notions inside my own head though that might be a matter of taste?

My point in a few words, Russia should beat the US in the very same game they do against Russia, example: fabricate lies about the US GOV, about their wars, fabricate lies about their intentions, make up news about US disintegration, California independence Texas independence, etc, play the blame game against them ,and also MSM fabricated hate speech against the US Government needs to be implemented, Russia needs to use their Muslim republics population and play the game against the real US purpose, which is to make war against Muslim world, the psy ops part is where Russia is being reaaaaaally weak.

Please not. Nobody can beat the US psy ops. Russia’s strength is the opposite.

maybe, but playing their game won´t hurt Russia at all.

Things start to go from bad to worse for Russia when they think they can beat the Empire at its own games. Like, call the Idlib jihadists “opposition” because Erdogan likes it that way. Then a bit later, those jihadists conduct drone/missile strikes at your Syrian bases, even though you were so nice to them. So now you have to bomb the jihadists a bit, and the Western press has a ball screaming “Russia is bombing the opposition!” Sorry, but you set yourself up for it.

By calling the Americans “stupid”, the pro-Russia circuit tends to underestimate their foe, for instance when it comes to what it’d take to exercise effective narrative control. Let’s start with the fact that the Anglos have been spreading their framework worldwide since the British Empire. Not unrelated, English is the international language and Russian is not. Then there’s Hollywood and let’s face it, Americans kinda did invent the internet.

You keep coming back to the jewish factor: the Putin clan promotes religion in Russia for a variety of purposes, without bothering to actually write their own Holy Book. So the Russian faithful still pray to the God of Israel; even after saving God’s People from Hitler, it’s Russia that feels obliged to pay deference to them instead of the other way round–which would’ve been more logical in my book. All in all, God is a big trump card for the American-Israeli axis against Russia, while China doesn’t care for this stuff.

And that’s just off the top of my head. Russia gives up something crucial once it gives up on truth (as opposed to Truth, the stuff spread by elderly out-of-touch patriarchs in funny clothes), which is too often.

Most of that is not possible at all. Russia is much weaker and now only has local threats.

You do forget USA actually also already are 52 states inside the hat in Washinton and CIA.

Comments from outside might be headers for needed reforms in USA as well. Even very biased USA need several internal improvements. Sanders, Metoo as well as Climate scepticisme can be helped by that.

Hard to see any russian muslims know anyhing about whats inside USA. USA for good reasons has seen what some few muslims can make of problems inside them and has stopped almost all now.

Most americans doing well has both gender working and based on education, hard work and paid by hours. We mainly see muslims do the opposite even keeping their women home remaining even more stupid then the boys and men.

If You willimprove something i Russia, You should invite South American to Russia. They soon will upgrade Russia even they hardly has any education.