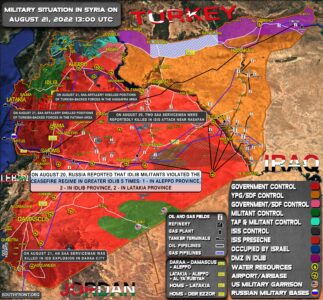 Just so you know how Ukraine will turn out, this map of Syria represents a best outcome according to the people who occupy Russian Ministry of Defense.

When this is over i doubt there will be a ukraine, Russian commentators refer to it as state 404,and there is too much orange for their liking, however it seems that the Kremlin believes Iran has this situation under control and they offer arial support when nessisary, recent attacks will escalate as impotent america is backed into a withdrawal, its getting far more complicated than the CIA envisioned and the weapon capabilities of the Iranian proxies outway americas ability to defend its little green zones.

Syria is in a bad spot.

Russia has not secure path to Syria. They either depend on Turkey or Iran and both have a history of doing things the US way. In the 90s Iranian Revolutionary Guards protected the US supported Islamic Leader in Bosnia and teached the Bosnian Mudjahedin to fight christians just like Al Quaida did.

Iran is not Russias ally and could take the bait to get sanctions removed if they replace Russia as deliverer of oil and gas to the west and it’s allys. Iran has probably not forgotten that Russia hesitated so long to deliver S 300 to them cause Uncle Sam asked them not to do it. Iran does not owe anything to anyone they were on their own against the US for decades.

The Turks can block the bosporus at any given time just cause they feel like doing so. Russia allready has a clash of interests with Turkey in Karabakh/ Artsakh where the turks support Alievs troops to kill christians (again).

To have a major contingency of troops in a place you cant reach without problems would be a big problem and the west would love to abuse it. Thats why Russia has just a small number of troops in Syria and this number cant do much more then they are doing already.

To be honest i think it is bad to even have such a small number so far out of your direct supply line. I would have not engaged the west in Syria at all but that was Putins choice to do.

Just like he chose to engage a fully western prepared and fortified and motivated Ukraine in 2022 and hesitated to face them in 2014 when they were on their own, unprepared and their troops not motivated to fight their brothers.

If his choices were smart or not … time will tell.

Ity wasnt the Iranians helping the Bosniaks at all.

Al Qaida and the Saudis dit it. None in the whole Balkan will see a single Shiit ther4 even even its a dead one.

Don’t call me a lier Jens. I am not one of your typical clients.

If you need more about it i might search for it later but for the first help a link to Wiki. And the important Passage.

You see one normaly pro russian people celebrated when Trump killed Soleimani these were the christians in Bosnia cause he may have helped the Syrian government recently but what he did there is what we remember.

Iran plays their own games and is not to be trusted.

Iran, a predominantly Shia country, was one of the first Muslim countries to provide support for the Bosnian Muslims (Bosniaks, who are mainly Sunni Muslim) in the war. The Islamic Revolutionary Guard Corps (IRGC) sent more than five (5,000 to 14,000 tons from May 1994 to January 1996 alone) thousand tonnes of arms to the Bosnian Muslims. IRGC also supplied trainers and advisers for the Bosnian military and intelligence service. Several dozen Iranian intelligence experts joined the Bosnian Muslim intelligence agency. The Iranian Ministry of Intelligence-supported mujahideen units trained selected Bosnian army units. The Hezbollah (Lebanese Shia), supported by Iran, also sent fighters to the war. In 1992, Iran with the help of Turkey smuggled arms to the Bosnian Muslims. Reports of “hundreds of tons of weapons” shipped from Iran over a period of months appeared in the media in early 1995. Iranian arms were shipped through Croatia. Robert Baer, a CIA agent stationed in Sarajevo during the war, later claimed that “In Sarajevo, the Bosnian Muslim government is a client of the Iranians . . . If it’s a choice between the CIA and the Iranians, they’ll take the Iranians any day.” By the war’s end, public opinion polls showed some 86% of the Bosnian Muslim population expressed a positive attitude toward Iran. According to the scholar Cees Wiebes, during the war “Turkey and Saudi Arabia were very willing to deliver weapons and to lure Alija Izetbegović away from Iran, but the orientation of the Bosnian government was far more towards Iran.”

SF, no news from fuckrainistan today?

I have one question @ Southfront that i do not get with your Syria Map. The three territories right to the TAF controled territory in the north of Syria have two different colours which are not represented in the map description.

Is this YPG/ SDF Control with the peace with the piece between Tel Abiyadh and Ras Al Ain under Turkish or somebody else control? If so then why not use the same colors as in the other YPG/ SDF and TAF territories?