The Iraqi Army and the Popular Mobilization Units (PMU) have made large gains against ISIS terrorists in the countryside of the ISIS stronghold  of al-Qaim. The army and the PMU have taken control over entire area south of al-Qaim and besieged the ISIS-held town of Rawah. Both al-Qaim and Rawah are located on the Deir Ezzor-Baghdad highway. As soon as, Iraqi orces establish contol over it, they will be able to link up with the Syrian Arab Army (SAA) and its allies via this supply line.

Meanwhile, the SAA and Hezbollah have liberated the T2 Pumping Station and started advancing on another ISIS-held border city, al-Bukamal. 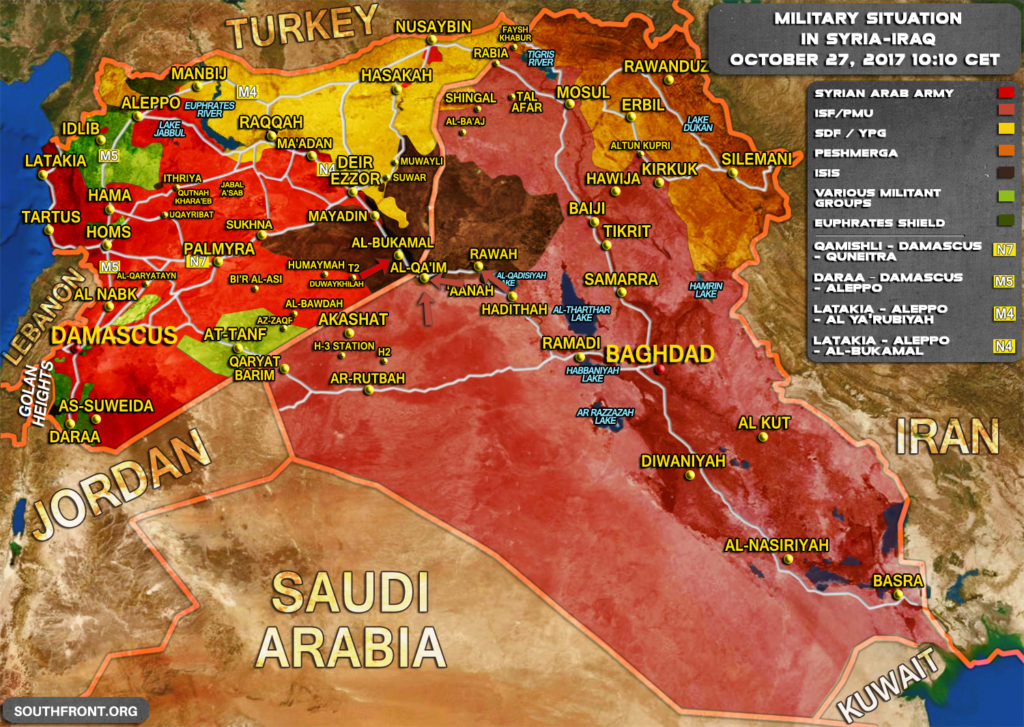 It is never inevitable.

Victory over ISIS US NATO ISRAEL is near, thank you SIRIA RUSSIA IRAN HEZBOLLAH , you are the safeguards of humanity and all the people that want peace and fraternity between nations !! Yanks and Brits zionists have been defeated alas ! But they will continue with other wars somewhere, they need them to feed their hunger of blood, death, destruction and money. They will continue. But now we know that they are not invincible. Glory to all the martyrs that died to stop them, your deaths were not in vain !! Many many thanks heros of the entire world !! God bless you !

Question is if Iraqis will push into Syria and help SAA. There where some news that day are USA backed. Isis can just move with all their remain terrorist forces to Syria- which is then bad for SAA if Iraqis stop at the border.

Iraqis are busy right now atracking their former Kurdish Allies, doubt they will be much help against Isis. *Definitely won’t attack YPG/PKK in Syria either.

The time is not right, when the west bank is fully cleared and the Iraqi / Syrian border fully cleared, the PMU shall enter and annihilate the scum….when the time is right.

I don’t know if the current PMU structure survives. Although now under nominal ISF control, the PMU is mostly autonomous.

Abadi would be wise to purge PMU leadership and install persons more loyal to him, which is entirely consistent with accepted Middle Eastern Governing style & practice.

That ain’t going to happen as US influence has been spent and Isarel is the enemy of all concerned and declared as such. Kurds are holding the dead man’s hand and are being goaded into a false dream where they have bet the bank.

Yes Empire will continue the death throes but to no avail will doubling down change the facts nor history.

To some extent, US is still pulling back from Middle East that started at end of W Bush and accelerated by Obama. Trump is obviously an isolationist reduced to making outrageous threats as opposed to foreign policy. *Best of luck to Putin in managing the Turks, Arabs & Persians.

I am just asking, don’t shout

Do you even know who is in the PMU – generally of course; based on religions, sects, whatever….take your pick? .

There are analysts that know more about than me who have followed their entire history and development; but generally speaking, the Hashd PMU began as several different Shia Militias attached to different religious or tribal leaders and political groups. The ones that emerged as most powerful were trained and equipped by the Iranian Quods Force, who also provided leadership with several ex pat Shia Iraqis that had fled to Iran to escape Saddam. Currently, many of them operate as independent units, bit via Presidential Decree by Abadi are Subject to Control of Iraqi Military & the President. However, this control is very limited; as Abadi himself is a Shia politician and doesn’t have a secure power base unto himself. The top 3 most mentioned are pretty much under direct Iranian control of QS, and then there is the Badr Brigade under control of Badr who is emerging as less an Iranian promoter.

Now Coalition spokesperson Dillon states that he misspoke earlier when he told Rudaw there was a ceasefire beyween Iraq & KRG.

***Curious to see if Hashd PMU tries any more suicidal attacks on Fish Khabur after sustaining heavy losses this week, as they are getting shot to pieces by Kurds.

You carry on living in cukoo land and ask John McCain for a hug.

You are mistaken.If you did a minimal amount of research you would learn that my statement is accurate.

You mean Fish Khaburthe which is an Assyrian town on the northwestern edge of Iraqi Kurdistan in the Zakho. I repeat an Iraqi Assyrian town occupied by Kurds, key word occupied.

Kurdish authorities in Iraq offered on Wednesday to put an independence drive on hold, stepping up efforts to resolve a crisis in relations with Baghdad via dialogue rather than military means. But an Iraqi military spokesman suggested an offensive to wrest back Kurdish-held territory would continue regardless.

The Iraqi government has transformed the balance of power in the north of the country since launching a campaign last week against the Kurds, who govern an autonomous region of three northern provinces.

Alligator tears indeed; “The fighting between the two sides will not produce a victory for any, it will take the country to total destruction,” said the Kurdistan Regional Government (KRG) in a statement.

In a brief social media comment hinting that the campaign would continue, an Iraqi military spokesman said: “Military operations are not connected to politics.”

Here is whats coming to over stepping Kurds due to the Kurdish criminal vassal Clans of US/Israel. 100,000 Kurds have fled the Kirkuk region for fear of persecution since Iraqi armed forces retook disputed territory after a Kurdish independence vote rejected by Baghdad, Kurdish officials said on Thursday. Kurdish troops had left Khanaqin, near the border with Iran, on Tuesday to avoid clashing with advancing Iraqi forces.

Nawzad Hadi, governor of Irbil, the KRG capital, told reporters that about 18,000 families from Kirkuk and the town of Tuz Khurmato to the southeast had taken refuge in Irbil and Sulaimaniya, inside KRG territory. A Hadi aide said the total number of displaced people was about 100,000.

George, Fish Khabour is 100% inside the Dohuk Province which is part of the Guaranteed Autonoumous Kurdish KRG in the 2003 Iraqi Constitution. It doesn’t matter if it is Assyria etc. NOT Relevant.

You did not accept the message Kenneth, The Iraqi government has transformed the balance of power in the north of the country since launching a campaign last week against the Kurds, who govern an autonomous region of three northern provinces.

There will be no autonomous region of three northern provinces by the Kurds. That was the result or rather reaction to the claiming of Independence by Barzani clan and the associated Kurd vassals. “We will not allow another Isarel in the ME” declaration by the surrounding countries of Syria, Iraq, Iran and Turkey. Some just don’t listen to declarations and facts on the ground. Stay tuned for the rest of the story……

We don’t know how it’s going to play out. Tillerson implies that the 2003 Constitution should be honored. Best analysis so far, is that Turkish Puppet Barzani pushed Referendum – but it was really just a gimmick for him to stay in power; then everyone reacted and Iraq over reacted by invading with military and help of Talabni PUK. While arguably disputed areas prior to 2014 might be subject to Iraq, although controlled by KRG for years; there is no question that the 3 autonomous provinces of KRG pursuant to 2003 Constitution shouldn’t be invaded. Now, there are serious doubts as to KRG Barzani Military Competence v Hashd PMU etc.

As a practical matter, KRG hasn’t lifted Blockade with Rojava & requested YPG help in defending KRG. (If KRG was really competent and trying to win they would bring in the YPG).

Militarily, I would rank YPG as much more effective at conducting Offensive Military Actions than KRG Peshmerga. (Not a sin, since very few Middle East Forces are Offense Capable).

***US SOF trainers have repeatedly stated YPG are best fighters they have “ever seen.”

Look at that chunk of land taken by sdf whores, makes me want to cry

I think that’s why the Syrians are attacking around T2, to force the US head-chopping, heart-eating rapers to defend two routes to Bukamal. Once the Syrians get there, the Kurd advances on the east side of the Euphrates will not be of lasting significance.

Which land? Unlike KRG in Iraq, the SDF has not ever sought independance from Syria.

Update: some reports in last 20 minutes that Abado has announced ceasefire. No widespread confirmation yet though.

you could have used better colours