This map provides a general look at the military situation in Syria and Iraq on June 28, 2017. Iraqi security forces are storming the ISIS-held part of the Iraqi city of Mosul. The US-backed Syrian Democratic Forces are storming the ISIS-held city of Raqqah. The Syrian Army and its allies are advancing against ISIS along the border with Iraq and in the countryside of Palmyra. 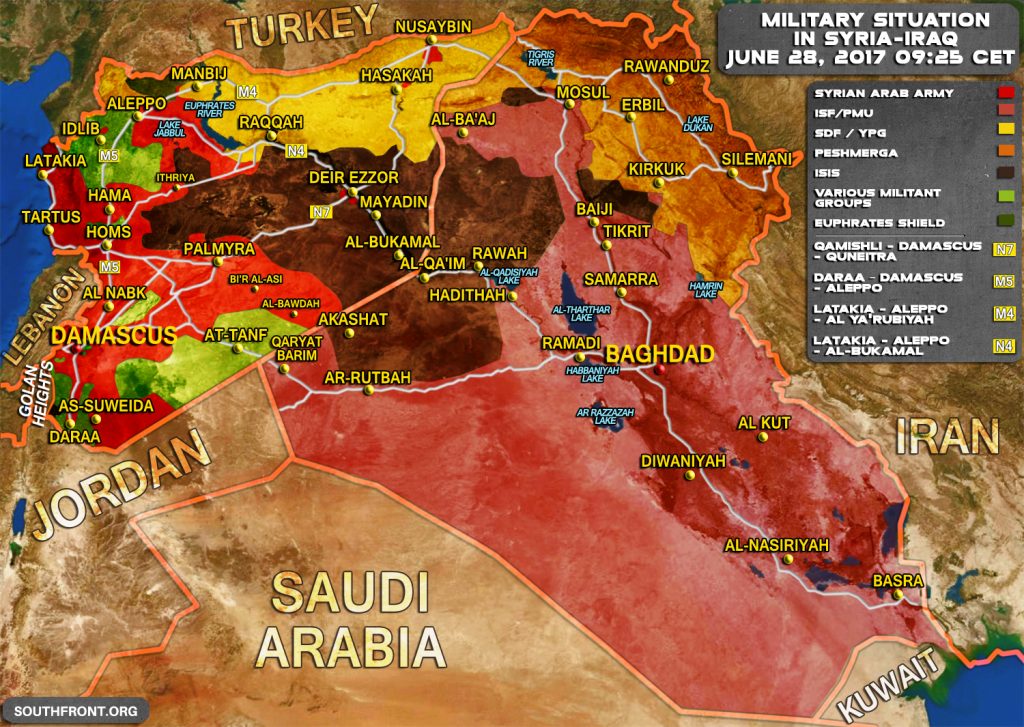 evidence US doesn,t need evidence ,international laws are for every one else

The Syrian government should ask the Iraqi government for permission to liberate Akashat and to hand it back to the PMU.

Ronald
Reply to  That Guy

@disqus_6fNldOpyEl:disqus A good strategic move , but do they have the manpower to accomplish that and still keep moving east . Maybe PMU’s , have much more manpower . What I have noticed is that the SAA and PMU’s have stopped telling the enemy what their next objective move is , much more professional . And the big question , is where are the White Helmets going to stage their “gas attack” , and film production .

Ronald: You are right, the ZIO-ANGLO- AMERICAN coalition of the GENOCIDES are preparing a chemical attack FALSE FLAG to attack the Syrian Government, this INTERNATIONAL GENOCIDES CRIMINALS, think that the people are as STUPID as they are, the people of the world are seen the CRIMINAL ACTIVITIES of this WORLD CRIMINALS, but THEY will be judged, for at the end of days a Day of judgement there shall be, the day of the returning celestial God will it be.

That Guy
Reply to  Ronald

I’m worried about the gas attack as well. I guess that the Syrian government should spend 100% of its GDP on military equipment, including Air defense systems (S-300, S-400), Aircraft (Both Air-to-air and Ground attack), and new equipment and training for infantry. Also, they should ask Iran to send more soldiers. Syria should do this because Russia will not confront the US directly, but I think that Russia would be happy to sell weapons to Syria.

There is problem in the above map. The Iraqi government has liberated the Akashat village one month ago because near Akashat there is new boder crossing.