The ISIS-held area is crumbling in Syria and Iraq under a pressure on multiple frontlines.

The Iraqi Army and the Popular Mobilization Units (PMU) are conducting large-scale anti-ISIS operations in the area of Hawija and in an area east of al-Qaim at the Deir Ezzor-Baghdad highway. The army and the PMU have liberated over 30 villages near Hawija and captured the town of Aanah east of al-Qaim.

At the same time the Syrian Arab Army (SAA) and its allies as well as the US-backed Syrian Democratic Forces (SDF) are advancing agianst ISIS in the countryside of Deir Ezzor city. The SAA has broken the ISIS siege on Deir Ezzor and crossed the Euphrates River. The SDF are clearing the ISIS-held area north of the city and seized important oil fields there. 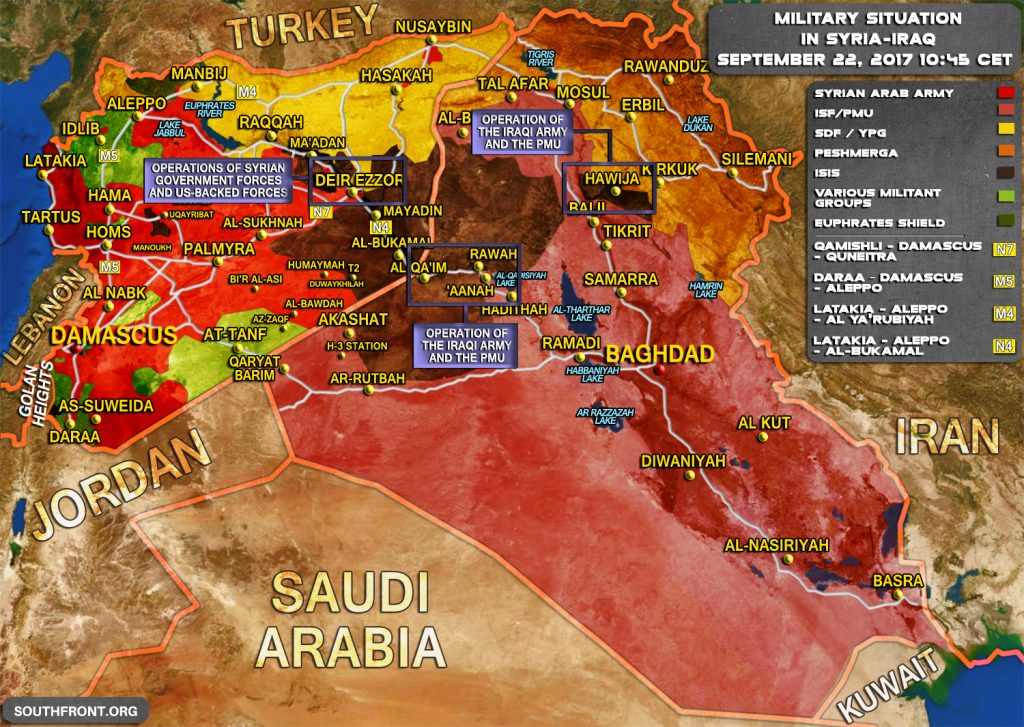 Exactly. The evil-led coalition deal$ are not against I$I$ as it is only a cheap pretext to serve Israhell$ interests.

There is no way that SDF with its limited manpower controls the yellow area on the map. Russia, SAA and allies are going to contest such claims.

First, Assad is not a dictator, he was ellected twice by his people in a election that not even USA could question it. Second, Assad never has oppressed Christian at all, Syria is one of the few countries in the middle east that has and tolerate all religions believes. Sure, Assad repressed many people during Arabe-Spring since this movement was designed by USA-Israel to create instability in all middle east. Do you remember that USA repressed USA student at Berckely during Viet-Nam war since they wanted to stop that war ? Plese, stop making USA anti-Assad propaganda.

Yes, I already saw this.

Sarcasm is difficult to portray in the comment section.

sometimes there are also those faking they didn’t get the meaning.. if u know what I mean :D

I Like the photo of the Assad Family, the children they have grown up with humility and respect which is rarely seen among political families in the world.

Dude, I was being sarcastic -_- Look at the pics I uploaded before replying to me I know Assad is a good person. The media keeps lying about him.

I see, thanks for the answer and explanation.

I’ve tried being ironical many times here, but believe me, there’s always somebody who does not get it.

Your sarcasm was better.

God you are stupid….

God you are so educated.

God is wise and education is learned because of his wisdom.

Assad wife is absolutely great, see her interview, Perfect English pronounciation. I ´m so happy for both. They defeated the american-ISIS-british-zionists . Tomorrow I´m doing a big paella here in Uruguay to celebrate the victory !!! You are all invited folks ! Hurray Siria, Russia and Iran !!

She IS an Englishwoman..

Asma al-Assad born in England, father FAWAZ AKHRAS, mother Sahar Otri al-Akhras, both Sirians from Homs, Sunni religion, fluent in Arabic and English,married to Bashar in 2000, 3 sirian children : Hafez Zeyn and Karim, her sister married to Adnan al- Dabbagh Interior Minister of Hafed al-Assad. British Home Office wanted to strip her British citizenship because she publicly supported Sirian Regime. NOW YOU KNOW WHO ASMA IS. !!! SHE IS A LOVELY AND VERY INTELLIGENT LADY AND PLEASE SHE IS SIRIAN !!!!!

yes. She is Syrian and she is the first lady. I like the presidential couple, they are young and energetic, and they appear to be very united and supportive of each other.

On the other side you have a Netanhyau that went under inquiry for “throwing his wife from a running car”.

Assad and his family continue the family tradition of visiting all faiths during the holidays,these are the reasons that people approve of his being President. Besides his wife is British and a Sunni and for her English should be no problem.

You know, she does the laundry too

That is true and she is very highly intelligent to go with her beauty.

Google is paying 97$ per hour,with weekly payouts.You can also avail this. On tuesday I got a brand new Land Rover Range Rover from having earned $11752 this last four weeks..with-out any doubt it’s the most-comfortable job I have ever done .. It sounds unbelievable but you wont forgive yourself if you don’t check it !sj128: ➽➽ ➽➽;➽➽ http://GoogleBrainFinanceReportsOnline/online/easytasks… ★✫★★✫★✫★★✫★✫★★✫★✫★★✫★✫★★✫★✫★★✫★✫★★✫★✫★★✫★✫★★✫★✫★★✫★✫:::::!sj128l..,…

Guys, don’t tease each other! Everybody’s up tight right now. That’s why doesn’t come to a joke. That’s exactly the way “they” use trifles to escalate mutual feud.

Clearly schadenfreude is an ugly word for an ugly emotion but between you and me, I’m gloating like hell. ;O)

Whom you are talking too? Do you have talks with your mirror?

That’s why he is schadenfreude, because this is in fact all craziness but as long as ISIS is crumbling it is for the best.

I don’t like disintegration of these countries. Israeli refugees are better in government management and security than all of other presidents. Their media is well established.

This world needs honest leaders. Israeli refugees are much better than Russians and even Americans governments. So I request to all Muslims and Christians worlds that your leaders cannot protect you so its better to live under Zionism.

Israelis are the worst politicians in the world and are extremely poor at managing anything , their companies need to be managed by the Gentiles shows how good who actually is and isn’t.

Maybe countries in this region should concentrate on providing good and democratic governance to their citizens and stop meddling in other countries, in corruption, in oppressing all or parts of their citizens.

I mean this for all countries there, no exceptions.