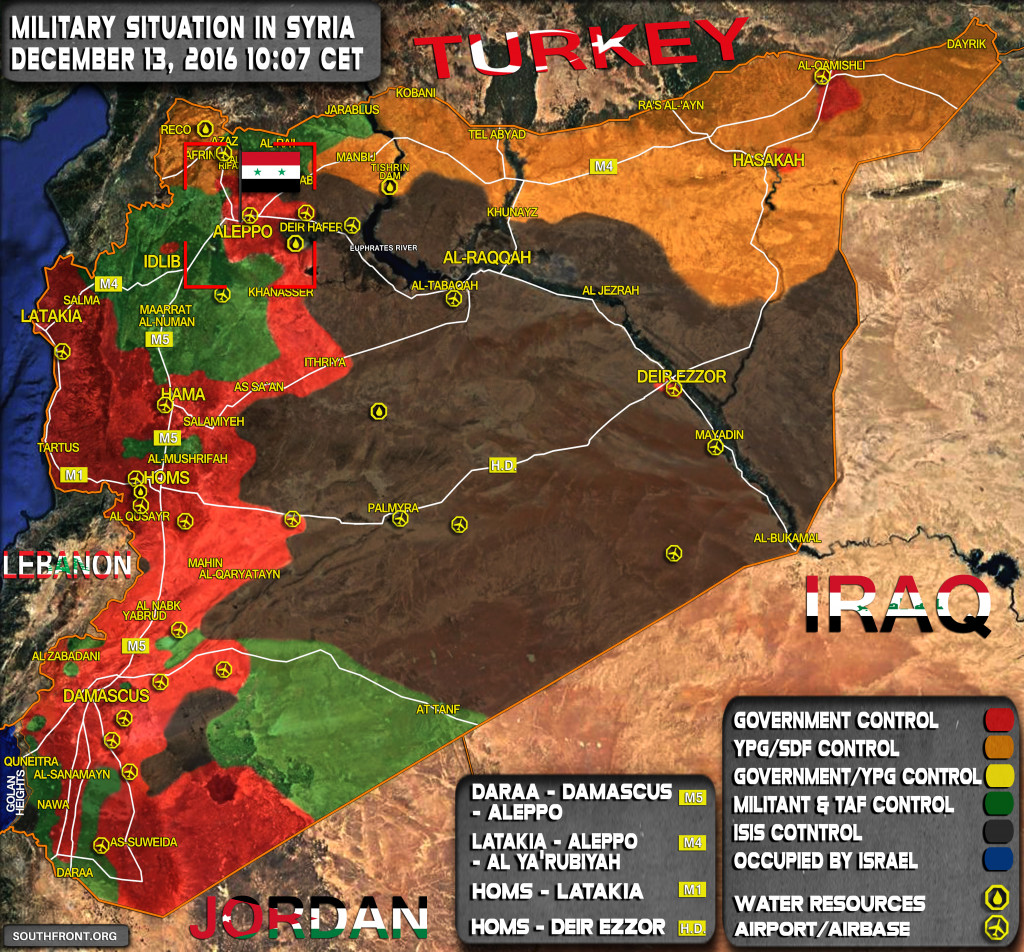 Militants that ingored a proposal to withdraw from the southeastern part of Aleppo city last night, retreated to an area north of Ramouseh.

It’s metter of hours when they will be purged by government forces. 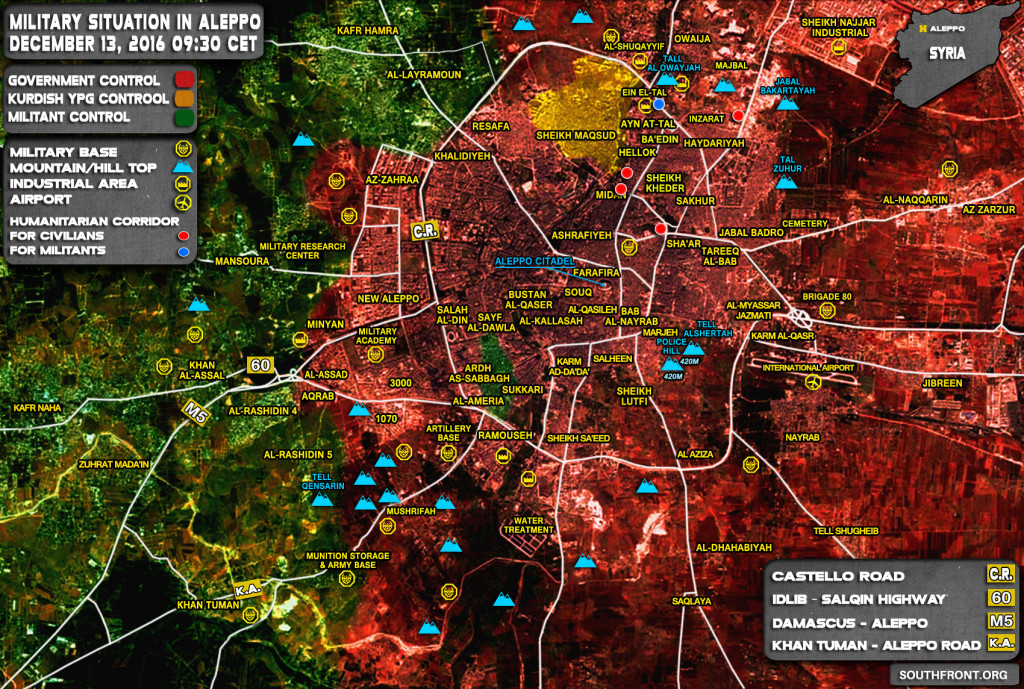 Before launching new full-scale operations, the Syrian military and its allies will need to regroup, resupply and rotate their forces and to improve security of the Aleppo countryside.

Then, government forces will have next goals and priorities:

The advance in the direction of al-Bab also looks not likely because this could lead to full-scale military confrontation with the Turkish Armed Forces. However, the Syrian government can decide to provide some assistance to Kurdish YPG forces clashing with pro-Turkey militant groups in the area.

SouthFront Team is going to release a dedicated video-analysis on the topic today at 21:00 CET.

First, it may be Idlib for Hezbollah and iranian consideration : http://www.chroniquesdugrandjeu.com/2016/12/alep-perd-ses-poils.html

That Aleppo pocket is getting hard to see on map! Looks like some diehards don’t want to board the bus. Maybe they do care for Idlib, and want to go to paradise instead. SY/RU air must stay vigilant around Deir Ezzor, this may be next stage of ISUS attack. Keep Hitting those convoys on M20 road. If having trouble using Tiyas airbase (too many falling shells), Can Sharat base be used? Recall earlier this year report of russian engineers being sent there to improve airbase. Close enough to front line to use helicopters? Is it large enough? Is this too many questions? I will look it up on google. In Tiyas, just hold on and don’t get flanked! Forget Idlib for now.

I agree with the article. But I think there are two short-term tasks to add to article’s ones. I think SAA should have the following two priority tasks among the short-term other ones listed yet: 1) Reconquesting of the area of Kafr Hamra town (see map), northward to Aleppo city, seized by FSA (along the Idlib front area) and the peacekeeping in Aleppo city (that the government can’t lost, as Palmyra), and 2) Reconquesting of the gas fields northward to Palmyra. 1) The reconquest of Kafr Hamra town could a) decrease the surprise-effect in case of FSA attack because in case of reconquest by SAA decrease the lenght of the SAA/FSA front in Aleppo area; b) Discourage Turkey and FSA from pincer-movement future offencives around Aleppo to avoid mid-term SAA encirclement of FSA in Idlib area; c) increase the “safety zone” radius around the city of Aleppo: Aleppo can’t be lost!! Meanwhile, on ISIS front is necessary to intervene in Palmyra area because the continuity of North and South part of Syria is fundamental because if government controlled area is divide in two, this make delicate the strategic situation. But ISIS expects probabilly a conìunter-attck along Hama-Palmyra directory. So, according to me, the government should attack ISIS not from West, but from North (if the on-field situation make it possible!), throught the montains, on open field, indeed securing to itself the oil fields that are northward to Palmyra

Expel Erdogan terrorist army first from Syria then terrorist will stop attacking.Turkey is currently mobilizing all terrorist.Erdogan and Nato decides in Syria who should be spare or pardon and evacuate on government expense.While the terrorist are sabotaging the government for Turkey’s oil and gas pipeline.Erdogans son is stil getting oil from Turkey army which is now physically involve in Syria.

hahahahaha……how many men are invlved wid ur Mom in MUTA