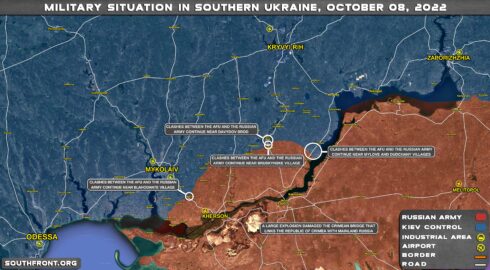 “The strikes by Russia’s Aerospace Forces against the temporary deployment sites of the 17th tank brigade and 92nd mechanized brigade of the Ukrainian army in the area of the communities of Seversk, Novoye and Yampolovka in the Donetsk People’s Republic killed over 100 Ukrainian servicemen and destroyed 12 items of military hardware,” the MoD spokesman said. “Tactical and army aircraft, as well as missile and artillery troops, hit the firing positions of 54 artillery units, as well as troops and military equipment in 174 areas,” he specified.

According to Konashenkov, four ammunition depots were destroyed near the Grigorovka settlement in the Donetsk People’s Republic, Uspenovka in the Zaporozhye Region, Novaya Kamenka in the Kherson region and the city of Nikolayev. A Ukrainian military communications center was destroyed in the Kharkov Region.

John Wooh
Reply to  Odessa will be liberated

NATO is the army of Satan

If this snowflake sissy army is Satan’s army, so how does Satan look like? Some decrepid old fart with Alzheimer’s and Hysterical Personality Disorder? Wow Satan is so scary 😆😆😆

SUPERZAR
Reply to  Odessa will be liberated

Bridge is already fixed :D The rest applies to ukkies and their mercs :)

What the f..k is going on with SF!!! Have you been hacked??? I want to hear the usual : ” Russia struck with high precision missiles !!! ” and not this “clashes” crap!

Russia no longer can hit anything with those missiles and clash means retreating.

A rally was organized in Moscow demanding a rocket launch on Washington. I dont blame them, considering the fact that US weapons of mass destruction are killing Russian citizens on a daily basis. https://www.reddit.com/r/tjournal_refugees/comments/xytoj5/

simon
Reply to  Odessa will be liberated

May I suggest launching number of rockets to New York. That is the center of satanist power in US, not Washington.

From my point of view, there are a number of places that imho need to be leveled simultanously to achieve a significant effect. New York is only one of them, as is Washington. But there are a few more targets that also need to be destroyed.

This is my nick.

SUPER CUCK FROM RUMANIA from Rumania
Reply to  SUPERZAR

THIS MY NICK. I AM A SHITSKIN AND LOVE COCK IN MY ASS

AFU has the Orcs on the run…heheheh

An explosion on the Crimean bridge, how is that possible?

Vanya
Reply to  Putin is sad

Because the Russians are too idiotic to institute common sense security protocols.

Russia has lost, they can only retreat.

Trolls are trolls, predictable pychobabble. You can feel the shiet is going to hit the fan for these Ukronazis. I loved watching them getting destroyed in Maripoul and seems Uber Ukronazi Zelensky has short memory. Continues getting his daily coke blast, because he has a tough acting job.

Mmmm. I need that many dick in my ass.

Seems USA and Ukronazi Zelensky shiting bricks watching the massive mobilization Russian troop coming from the south. They will push these Natostan Nazis back to he’ll. Don’t worry they are going for Karkiv, as well, as Odessa. It will be bad is all I can say.

Sure it killing many Ukraine and US soldiers pretend to be Ukraine soldiers too ,sad 😢 US and UK will sell their widows and doughters as prostitutes and sex slave in US and UK lol.

BEFORE: I thought I will destroy the bridge, making it impossible to pass, forever. I would become a national hero for committing this brave and glorious act for my country, which changed the course of the war and lead to nazi victory. I will do it for my country and my family. AFTER: But now I am in hell sucking bandera dick, the bridge is already fully operational, the press call me terrorist, it was a dumb and useless suicidal act, which lead to absolutely nothing. My country already forgot about me and my embarrassing existence. Wife and daughter too are now ashamed of my stupidity, already on their way to the UK where they will become toilet cleaners.

List of phrases recommended for state-patriotic journalists when describing the situation with the Crimean bridge (as part of the gratuitous humanitarian assistance of the presidential administration):

1. “What nonsense! We’ll repair it in 2 days!” 2. “So what, they blew it up? October is coming to an end, the whole country has already managed to go to vacation on Crimea! Until the next season, everything will be better than before!” 3. “No need to be nervous! One was blown up – we will build a second one nearby – exactly the same. – They will get tired of blowing up!” 4. “Stupid punks! They gathered for 7 months, and on the eighth they only managed to drop only three spans!” 5. “Why do we even need this bridge, when we can use barges?” 6. “Great, now the whole world saw that there are terrorists in Kyiv! Now Zelensky will not get away! For the sake of that, even 10 bridges are not a pity!” 7. “Excellent! Now we have two air defense divisions freed up and a bunch of guards can be sent to the front.” 8. “Do you know how much the maintenance of this bridge cost us for the budget? Khokhols – idiots – did us a huge favor! Otherwise, we would have had to bear losses year after year!” 9. “The bridge caused great damage to the ecology of the Sea of ??Azov! Each time the vehicle crosses the bridge 2 white bear die on the North Pole, also 3 rain woods in Amazon die” 10. “We cannot be like those Khokhol Nazis! We are not like them! If necessary, we will blow up all our bridges and will all die, so that they – our Slavic brothers can go to heaven!” 11. “What do you care? After all, it was blown up somewhere in the Crimea far from Moscow and Leningrad…. 12. “In fact, crests have harmed themselves! Now our people will rally even closer around the president! And we are no strangers to difficulties!” 13. “And now we will restore the memorial on Saur-Mogila!”. 14. “Putin will not forgive them! He is vindictive! At least 30 years will pass – then he will definitely remember everything! The world will shudder from Terrible Russian Silence!” 15. “We will not fall for a provocation! Let them blow up anything, bridges, power plants, schools, Kremlin… we will not alowed us to be provoked, we will not declare war!”

“Ukraine has amassed a sizeable number of foreign fighters on the frontline in Zaporozhye Region, which recently voted to join Russia, Vladimir Rogov, a member of the local administration’s chief council, told RIA Novosti on Sunday.” Well, then get the 9K720s ready – a good way to demilitarize the enemy in a fast and accurate way.