On Wednesday, the Syrian Arab army (SAA) repelled a large-scale ISIS advance in the area of Humaymah and the T2 pumping station at the Syrian-Iraqi border.

According to ISIS, over 70 government fighters were killed in the clashes.  Pro-government sources claimed that the SAA killed up to 80 ISIS members, destroyed several vehicles, and seized 11 other vehicles.  The numbers provided by both sides look overestimated.

In July, the Russian Defense Ministry released a map showing the T2 pumping station and the village of Humaymah as being under the control of the SAA.  However, in reality, both sites remain in the hands of ISIS despite SAA attempts to liberate the area.

On Thursday, clashes continued in the area of Sukhna southeast of Palmyra where ISIS terrorists were trying to regain this strategic town from the SAA. 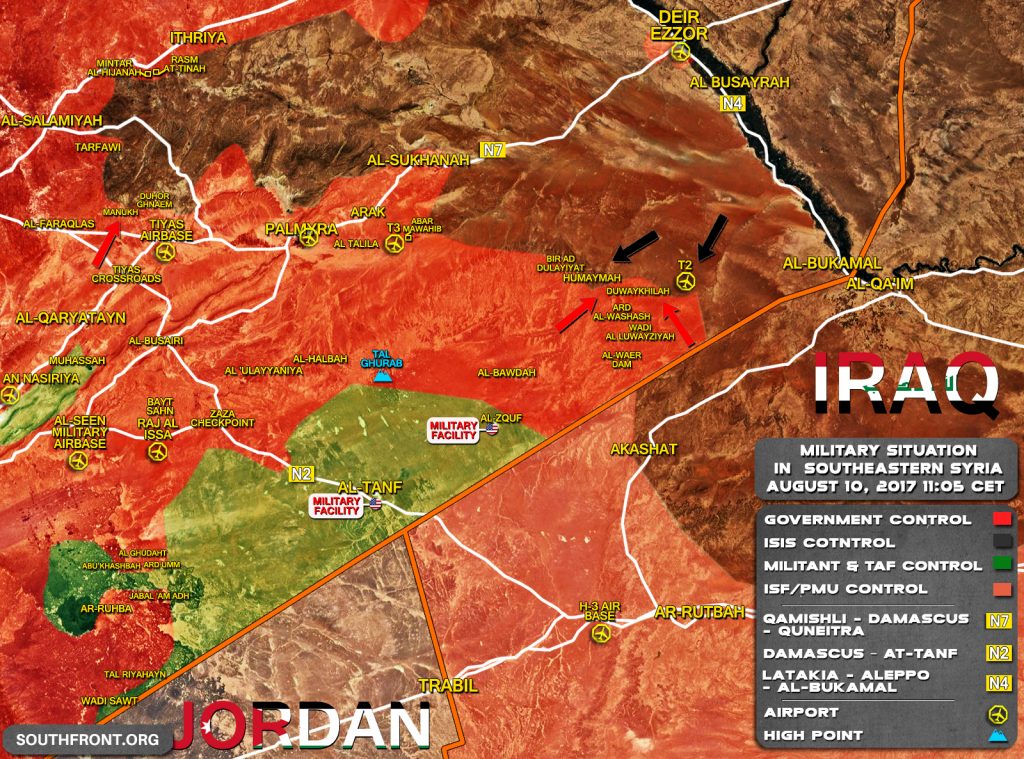 The more the ISIS rats were pushed back the more their resistance increases because they were concentrated like the rest of any friuts when you squeeze out the juice.

Yes it seems ISIS is trying to break though to the American base at Al Zquf, so they can be resupplied by their Israeli masters

No one is in control of T2 pumping station it goes back and forth there , ISIS is losing manpower in these assaults some up to 4 to 1 this type of attrition will defeat them quicker. They are being forced to put their forced conscripts in the field right away now and are finding resistance among the population already, which is attacking them. The hand writing is on the wall and they are fast becoming defeated , ISIS may as well head north and fight the US. The US made sure most would stay south they blew up the bridges preventing them a way to escape. The US wanted them to be forced to fight the SAA so they could make land grabs in the north along the Euphrates.

I like that the SAA is fighting this fight in southern Syria. It’s easier to kill ISIS in this area! Resistance is victory in this area! The concentration and desperation of ISIS to break through this SAA barrier is better in the long run for the SAA! It means less to deal with in DEz. I wonder if the T3 Airport is being used. This would be handy for Syrian Airforce helicopters to aid the SAA on the border!