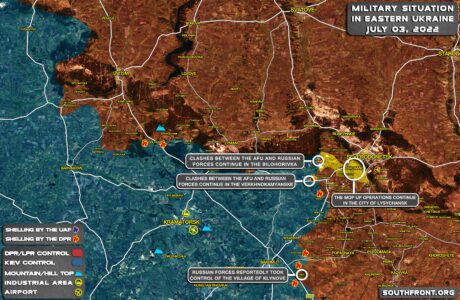 It’s now clearly on to liberate the DPR form Ukrainian Nazi piss. NATO is being humiliated as it depends on a drugged up Z-elensky to control things, while the Ukrainian military are turning away form stupid Z-elensky orders to die for his fame and fortune. It’s not beyond the realms of possibility that Ukrainian military will take out Z-elensky to stop him continuing to use Ukraine as a career and wealth enhancement tool!

Dead on Reality. The shitclown Zelensky is worth far more to Russia alive and in power than he is dead.

I do not know where to put this article if SF do not block it; so you end up the lucky one… this is exactly what I have been banging on for years (although I see it as a Brit a bit more) – if you think it is worthwhile, please circulate as you know more people than me = https://www.globalresearch.ca/crisis-ukraine-not-about-ukraine-about-germany/5770269

Many Russian jets in the air now being reported.

Covert Intel is claiming that Russian President Putin has ordered 48 hours round the clock attack on Kiev including the presidential office.

I AM TRYING TO GET CORROBORATION OF THIS CLAIM.

It looks like the UA will retreat to the road that leads from Bahkmut NW. That will give them an adequate road network to supply their forces…The pocket that they are trying to withdraw/escape from had only one or two roads, both under Russian artillery fire, which hampered supply. The real question is how much material and forces can the UA withdraw from the pocket or can the Russians close the door.

When was the battle of Lisichansk? Was there even one? Was there a major surrender, or did most of them try to retreat?

I remember the encirclement clearly, and it was obvious that the position would soon be indefensible but I don’t remember there actually being a major battle. Did they get the order to ‘evacuate’?

Nazi-ukraine ran away for their life

Ursula Von Der Leyen announced the other day that Ukraine can only join the EU if the country rids itself of the influence of oligarchs on the government and the economy. Ironically, this puts Ursula more or less in the same camp as Russia, insofar as getting rid of the oligarchs and their personal Nazi battalions is also partly Putin’s goal. So does she realize she is subtly justifying Putin’s operation?

On July 3rd, 2022 one day before the Fourth of July 🇺🇸, Lysychansk (Luhansk Oblast) was occupied by Putin’s army and other militants in less than 10 days, resulting the full occupation of the Luhansk Oblast who’ll conduct a referendum to declare independence from Ukraine 🇺🇦 and join the Russian Federation 🇷🇺 as a republic within the republic like Chechnya and other Russian states.

Ukrainian troops alongside Neo-Nazi Azov and some Western militants 🇬🇧🇨🇦🇫🇷🇩🇪🇹🇷🇵🇱🇪🇺 that are battling Russian troops and other militants in Avdiivka, Marinka and Horlivka (Donetsk Oblast) have no option(s) but to retreat to important key cities of Kramatorsk, Sloviansk, Bakhmut, Siversk and Soledar (Donetsk Oblast) to prepare for the bloodiest battles of the northern Donetsk area, suspecting Putin and military command to conduct a simultaneous multiprong attack from Izium (Kharkiv Oblast), Sievierodonetsk and Luhansk (Luhansk Oblast) and Donetsk and Mariupol (Donetsk Oblast) (5 directions) to quickly capture as much areas as possible for the final battle at Kramatorsk for the invasion to end.

When the invasion is concluded, time to put in the Soviet Union national anthem music to show the world, The American Dream is dead ☠️.

The Lugank People’s Republic is now an independent young country and it has nothing to do with the corrupted country known as Ukraine anymore. Zero, nada. That said the heroic marines of the LPR are very thankful for the AFU pussies who escaped Lisichansk yesterday, because they left a lot of trophies, including vehicles, intact drones, western weapons and a lot of ammo.

It would appear that the encirclement of Kramatorsk is the next objective of the Russians, though how fast is the question. Will the regroup and start an operation towards Odessa? They seem to be shying away from the major cities currently due to the Ukranian army hiding behind the citizens in them, at the same time they could start to re-flood western Europe with more Ukranian refugees by attacking them. I’ll be curious of their summer objectives and eagerly waiting for Europe to freeze this next winter.