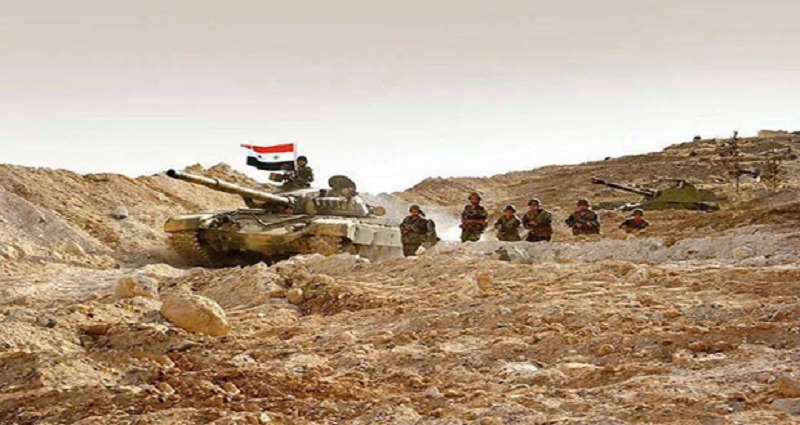 Last weekend, the Syrian Arab Army (SAA) continued its advance around the ancient city of Palmyra capturing the Abu Duhur mountain. Thanks to this advance the Abu Qulah dam and Wadi Al-Hissu – 12km northwest of the “4th station” are under a full fire control by government forces. The SAA also reached the gates of the gas fields area that includes Al-Shaer and Al-Maher fields.

In Deir Ezzor, the Syrian Republican Guard carried out a limited operation against ISIS gatherings around the Al-Snuf hill and the Al Sham fuel station south of the city. As a result the SAA destroyed an ISIS check point and a technical vehicle belonging to the group. A dozen of ISIS fighters was allegedly killed.

Russian Air Force jets continued stirking ISIS positions around Deir Ezzor and its airport. However, no confirmed reports about ISIS casualties as result of Russian airstrikes are available.

The Syrian and Iraq air forces targeted ISIS bases and factories at the town of Al Bu-Kamal and across the Syrian-Iraqi border.

According to sources from Deir Ezzor, ISIS ceased its attacks on the Deir Ezzor airport 4 days ago after moving many of its fighters to Raqqah and Tapqah in order to stop the US-backed Syrian Democratic Forces advance in that area. Sources say that a majority of ISIS fighters remained in Deir Ezzor are young and inexperienced or ex-convicts.

There just has got to be a way for the defenders of Deir Ezzor to capitalize on this. Or are they just as exhausted as their ISIS besiegers?

What do you think? Of course they are exhausted, isis aren’t on siege so they can rotate their fighters, and they are also under drugs and are complete crazy rapists, they have lost their minds years ago, defenders of Deir Ezzor don’t have the luxury of surrendering to insanity to find strength.

Dier Ezzore town and air base have natural geography features that greatly aid their defense. These features are extremely fortunate for besieged SAA, and one their few lucky breaks in war. The air base has huge flat plateau across front of it forcing ISIS into fully exposed frontal assaults that usually cost them many lives for no gain. The town itself has three hill tops right in front of it that give immediate vicinity fire control, and both areas are protected from rear assault by the Euphrates River. That is why USAF bombed SAA positions at Dier Ezzore in 2016 – they hit the SAA positions on the key strategic hilltop in front of town making an entry point for ISIS – breaking that defense was certainly no accident. Point being, SAA can hold out in Dier Ezzore positions despite being greatly outnumbered by ISIS, but any attempt to move forward of positions puts them into terrain with little cover and lot of exposure for precious manpower.

I want the SAA to reach Deir Ez Zor from Palmyra but it will be hard . This will be long operation with a lot of forces . TF will also take part . The main force probably will be 5th Corps