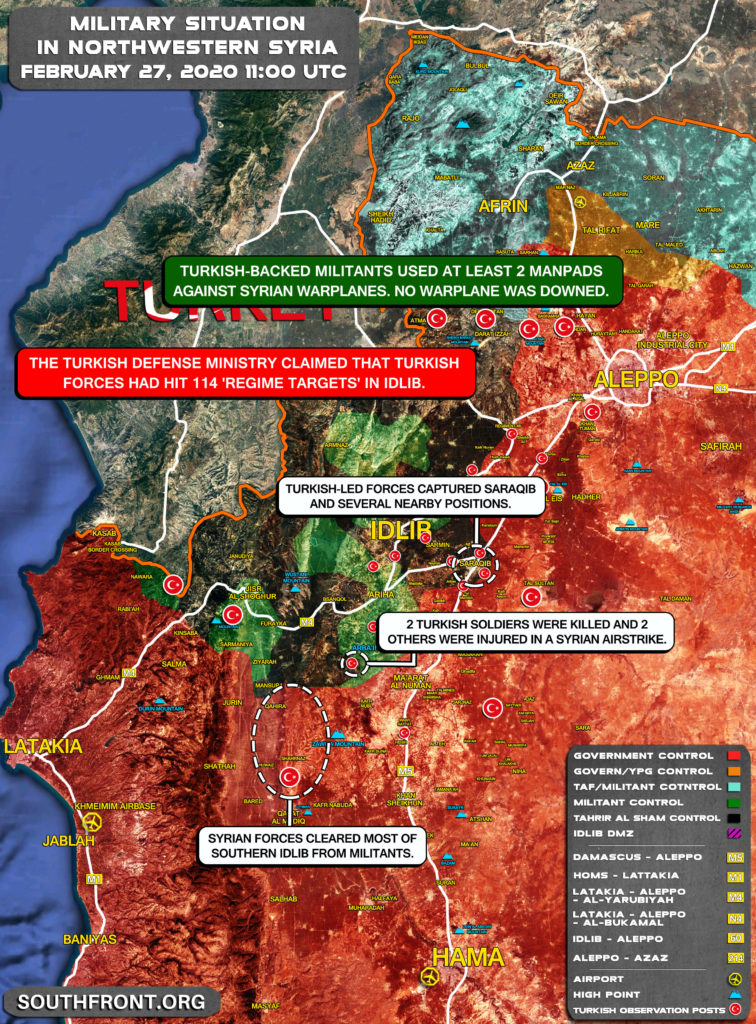 Saraquib was lost but I see something else today – the M4 is within reach. How long does Turkey think they will keep Saraquib? Something is telling me Syrian and Russian commanders probably noticed the indefensible lines west of M5 and decided they had to take M4 first

I tend to agree with you. I would not be surprised if SAA reaches the ARIHA junction on M4 in 3 – 4 days. Looking back the performance and the succedsfull collaboration of Syria and Russia during the last 5 years or so, I am pretty optimist.

PS…and yes, I still believe is the end of what we recognize today as Turkey…

Not really, just an opportunity to exploit.

In his article six days ago Michael Khodarenok wrote about such events because Turkey is unmatchable both for Syrian and Russian forces not just in Idlib, but also in Syria as whole. https://www.gazeta.ru/army/2020/02/21/12970135.shtml?utm_referrer=https%3A%2F%2Fzen.yandex.com

So Saraqib fell again, Turkrats and terrorists control M4-M5 junction. Yet this morning both Russians and Syrians claimed attack on Saraqib was repelled. Is it time for some new strategy or open war between Russia and Turkey??

afrin-idlib-nort east syria all invaded all occupied by TURKEY under the direct green light and OK from Putin!

all bs that is Happening now in syria with regards to turkey…..afrin..Idlib…North east syria…. PUTIN opened the Gateway. FACT.

so stop sucking bibi´s Zionist bro´s cock. u Folks are pathetic and ridiculous

PS: S-400 will be operational around end march/April…………. 400km radius against war planes…..and if u donks believe that erdogan wont use it against SAA planes , you Folks are totally brainwashed by them satanic zionists.And the clue is, it will be stationed on turkish soil, ,, in short,, once S-400 is in operational mode, SAA planes will not fly anymore in Idlib or afrin.

death to america DEATH TO ISRAEL curse on the jews-the houthi Slogan , the bravest of the brave

FreeThinker
Reply to  klove and light

Its very obvious. Chabad Lubavitch controls the show. Putin’s mother is Jewish so that makes him Jewish. There is a reason why you cannot question the holocaust in Russia.

The main terrorist forces are very busy with Saraqib. Maybe it’s an offer by the SAA to be able to operate undisturbed south of the M4 and to close that pocket. Who knows. We will se.

SAA had problems with a front that was to long. By closing the gap in the south the front line will be shortened. With a shorter front line it is easier to control and to coordinate. SAA will take back Saraqib.

It makes total sense. Now the attack will be South – North. Reaching the Outskirts of Idlib. But it all depends of Russian support. Now more than ever. Even with Russian “real troops”… I suggest send the legendary Pskov Air Regiment, Spetsnaz and One or More Armoured Division, there are some Chechen terrorists in Idlib…Pskov deal very well with Chechen terrorist. Also Russia should intesifies its Aerial Campaign, and rearm Syrian Arab Army. With the massive Turkish support to Terrorist, if Russia don´t act quickly the Ottoman Rat ruling in Istanbul will obtain a victory. Turkey was never an ally of Russia and will never be. Russia should now let the Gulenists eat that bastard!

We only seen a minor setback, SAA will regain control of those areas. Turkey need Russia more than many understands since Russia is the only partner that really understand Turkeys problem with the kurds gaining control over vast areas in Syria along the Turkish border. I think that Turkey value the problem of kurd areas more than Idlib when everything comes around. Turkey will need to choose since they can’t have both Idlib and Kurds problems go the way that Turkey wants them to. That doesn’t mean that Turkey won’t put up a fight and keep arming terrorists, it only means that when the time comes Turkey will need to chose.

Putin is too soft. He should send Russian troops by yesterday. Some Airborne divisions and Armoured Brigades would solve. Looking at the map, Deploy then in Aleppo and Overrun the position between “Regiment 46” and Sheik Barkat Mountain. Establishing a Safe Zone, cutting the Turkish supplies to terrorists… The only “route” to Turkey would be the Mountains, with no Highways.

Barely my “friend”. I don´t have the carreer of Putin. Because of this I Expect This from Him and Not Him from Myself. Saying too soft, is that Russia doesn´t show it´s power more frequently. It´s expects too much of diplomacy. The West will never loves Russia. Russia should be as hard as Soviet Union was, despite being not such powerful. Khruschev put Missiles in Cuba… just a reminder of how soft and hard plays… Escalate to Descalate… Russia doesn´t use it.

I think you fail to see the sustainability of the power differences and shelf life of threat versus diplomacy and reliability of a multi-polar movement versus Empire and might makes right. Trustworthy alliances of win-win situations for those involved versus the vassals to Empire model are the future despite the present situation presented.

And the majority of “military and political strategists” of today are Wishful Thinkers… Just look at their movements… The US Killing of Soleimani and the posterior humiliation of the Empire… They probably never read Sun Tzu, Machiavelli, Hermocrates of Syracuse…

And You just used an Ad Hominem Fallacy… discuss the proposal i made ahead…is feasible? Justifiable? Russia will bleed for it? I don´t think so. If you read the Map you will see that the Route of Supplies for Terrorists bypass the region I mentioned… They will pass there with Russian troops in there? Nope.

Spetsnaz is definitely in there somewhere. Since when does Russian Military fight without them?

More of them… Russia isn´t occupying half of the planet like the US… Syria is Russian conflict, a victory of SAA is a victory for Russia, and a defeat the same.

If the SAA could take Ariha and the M4 blocked to Jisr al Shoghur for the militants there … , then , the terrorists have to fight two fronts at once .

2 days left before TSK starts their operation, I bet it would be a day the SAA won’t forget for a long time. As for us, on Monday we end Bibi’s traitorous regime and we put a true patriotic government in power led by Gantz. So Gazans should be prepared, hell is coming for the motherfuckers. Stay tuned.

Dude, you are occupying their land, you can’t be proud of that. How long do you think it will last though? There are like 9 million Israelis against what, 400 million Arabs? No time in the history of the world has this been tenable. Israel will not survive, it’s a matter of time.

You view it as their land, I view it as ours. But I am also a pragmatic person, Trump’s peace plan can give them a state- yet they refused. So if they don’t want to take what we offer them, then they have no right to complain to the world.

Israel has so many problems to deal with it: Demographics for example. What they will do with the Palestinians, when them become majority in the Lands? Other problem is the Haredi sector is the only Jewish sector that grows. So in the future, the Land of Zion, imagined by Herzl, an non religious-Jew, will be very strange too say the least. The other demographic problem is that Israel is already overcrowded! There´s no more space! From Gush Dan to Haifa, no more space. In the North Israel Arabs… It will have to colonize the Negev

The Negev has alot of space and it will be the new Israeli center in the future, Regarding the Palestinians and the Orthodox Jews I view them both as a threat to my secular Israel. Israel will never be a religious state like Iran, we will have a civil war if it comes to that.

I also see them as threats to Secular Israel, which is the origin of the State. And you should also put in your list Evangelical Christians. They maybe “support” Israel with this or that, but have you hear what they say? What will happen in what they call “Armageddon”? In my country there´s a growing Evangelical Christian community, and they´re dominating everything ruthlessly… and being a threat to Secularism.

I get you Bruno, but secular Israelis will never accept to be ruled by orthodox jews. There is a real internal war when it comes to topics like opening businesses in Saturday or eating un-Kosher food. The IDF is secular and in the worst case scenario it will be the last shield against those shitty orthodox jews.

Israel…the Land of Forever Elections…kkkkkk Gantz Kahol Lavan will have to gain the support of Arabs Joint List and will invade Gaza? How long did this “Coalition” will survive? If it wins, which i doubt. Will have to stay with the old Likudniks forever!

58 Seats for a Kahol Lavan – Joint List – Labor Meretz… if the Arabs were in, which i doubt.

The destruction of Israeli Left was a huge blow to the country. Now you´re left with Crooked Likudniks forever, and ever, and ever. Lieberman already says no Netanyahu coalition. So. No majority. Again!

Lieberman the “King Maker”, now is the Elections Maker!

You got it right I admit, but here is another scenario – Bibi goes to jail by a court decision, and then Kahol Lavan + Likud form a unity government led by Gantz first. If that is the case, Hamas will be the first one to face the consequences of the rockets.

Likud without “Bibi” maybe. But there are a time for this, probably not so quickly. But i have to say, that with Gantz Israel will be better. Hamas are barely a threat, except for communities around Gaza. I don´t see a big conflict. And the possibility of a politician being persecuted while in Office! That´s amazing… I live in Brazil, this is prohibited here…A shame for my country! Politicians, Judges, and Military here have immune condition. No one should be immune!

That’s the thing Bruno, if Bibi somehow wins and get 61 seats in the Knesset, then he will be able to pass any law he wants – including a law so he can be immuned from prosecution. This is a war over our democracy, he is a traitor and a dictator.

Erdogan doesn’t seem to be able to continue on the current path. The humiliation path will lead to his downfall. In my opinion, northern Syria is expected to have a turbulent period starting next week. Turkey will want to regain its lost honour. Then Russia will have to exercise its diplomatic capabilities.

The sound is fake :)

is it a video game.

The only logic I can see for allowing the Turks access to Saraquib is to set up a Honey Pot. Based on the film of the artillery attack yesterday, I believe that this may be correct.