Clashes between the Kurdish-led Syrian Democratic Forces (SDF) and Turkish-led forces continued in northeastern Syria after the SDF leadership and the Kurdistan Workers’ Party (PKK) had rejected the key demand of the US-Turkish agreed 120-hour long ceasefire – the withdrawal from the 32km-deep ‘security zone’.

Assad must ask Kurds (ex-USA-Israel puppets) to get rid of their yellow flag and to adopt Syria flag by heart.

This is already done according to the agreement with Assad.
But it will take time, and a complete restructuring of the SAA integrating the Kurds will take weeks if not months.
In this days of war it is certainly not the time. Every restructuring weakens any army till it is fully implemented. Everything needs to be redone, not only flags: Command, tactics, strategics, communication, logistics…
This is for a time when not the 2. largest NATO army made a deal to invade the country, but a task for more secure times.
And again, it is already agreed by both sides to be implemented as soon as it militarily possible.

Great point, but it is real easy to add a Syrian flag.
Just start passing them out to the SDF. :)

Why humiliate them further for superficial stuff that changes nothing? Morale is important, and the deal is sealed anyway.
Why now break the deal and agreed timeline asking for stuff that as i said changes nothing?
I get we all want this symbolic victory of the SAA having their, and their flag only in all of Syria. But what is important is, that such a deal was made, and at least this problem will be solved.
But again, i too wait for the day when the Syrian flag will be raised in all of Syria. But the problem now are not the Kurds, but the Turks and their renewed US partners..

Sorry my post was not that clear, I meant add a flag. :) 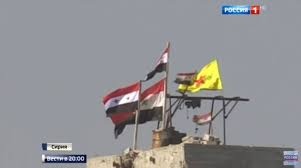 Ah okay. ;)
Though in this chaos, i dont think there is ANY coordination behind it..
SAA has raised their flags when they took a new position in the last days always AFAIS and will continue todo so.
It is just pretty confusing what is actually going on on the ground; Where SAA fights with SDF or only SDF..
In the 5 KM zone is AFAIK only SDF because of Turkey is allowed to operate there, but my impression could be wrong.
This is fog of war X 100.
And with that said, good night, should tomorrow bring more clarity. To those issues, and more important, if the Turks stay with their renewed allies in the US, or if Erdogan makes a 180 again toward Russia.
Though i doubt it, NATO backing is more important for Erdogan. Militarily, but also NATO has always been 1000 times more aligned with his occupational + Jihadistic agenda in Syria.
NATO can offer him everything he wants, now that the Kurds are out of the way and abandoned. Putin not so much, and even to the opposite.
Sadly IMHO this is done.

“Clashes between the Kurdish-led Syrian Democratic Forces (SDF) and Turkish-led forces continued”
Strange, liveuamap shows nothing going on in NE Syriam except for some activity east of Ras Al Ayn.
https://syria.liveuamap.com/en/2019/19-october-the-top-kurdish-commander-in-syria-general-mazlum

It is pretty obvious SF sometimes uses non-open sources, e.g. military and intelligence sources.
And i would not trust that Jihadi infiltrated liveuamap too much anyway. ;)

;) Btw, i dont rule this out.. IMHO it was Turkey who implemented the false flags, as they always were and always will be the main Jihadi backer. The US NATO and Sunni gulf states payed, recruited, made the propaganda, but Turkey implemented and directed it.
Now that the Turks swung back to the US side, expect more of anything that could benefit the Turks.

Another blog from the retired diplomat M. K. BHADRAKUMAR with some interesting inside information from diplomatic sources on what Assad has told Russia Friday concerning the Turkish invasion:

Another proof that my stance, that this is not Erdogan doing some secret plan by Putin, was more true than some here still want to believe..

Quite the opposite, with that agreement as the renewed US Turkey alliance on the basis of NATO changes EVERYTHING:

“The extraordinary US overture to Turkey regarding northern Syria resulted in a joint statement on Thursday, whose ramifications can be rated only in the fulness of time , as several intersecting tracks are running.

The US objectives range from Trump’s compulsions in domestic politics to the future trajectory of the US policies toward Syria and the impact of any US-Turkish rapprochement on the geopolitics of the Syrian conflict.

Meanwhile, the US-Turkish joint statement creates new uncertainties. The two countries have agreed on a set of principles — Turkey’s crucial status as a NATO power ; security of Christian minorities in Syria; prevention of an ISIS surge; creation of a “safe zone” on Turkish-Syrian border; a 120-hour ceasefire (“pause”) in Turkish military operations leading to a permanent halt, hopefully.

The devil lies in the details. Principally, there is no transparency regarding the future US role in Syria . The Kurds and the US military will withdraw from the 30-kilometre broad buffer zone. What thereafter? In the words of the US Vice-President Mike Pence at the press conference in Ankara on Thursday,

“Kurdish population in Syria, with which we have a strong relationship, will continue to endure. The United States will always be grateful for our partnership with SDF in defeating ISIS, but we recognise the importance and the value of a safe zone to create a buffer between Syria proper and the Kurdish population and — and the Turkish border. And we’re going to be working very closely .”

To be sure, everything devolves upon the creation of the safe zone. Turkey envisages a zone stretching across the entire 440 kilometre border with Syria upto Iraqi border, while the US special envoy James Jeffrey remains non-committal, saying it is up to the “Russians and the Syrians in other areas of the northeast and in Manbij to the west of the Euphrates” to agree to Turkey’s maximalist stance.

Herein lies the rub. Jeffrey would know Ankara will never get its way with Moscow and Damascus. In fact, President Bashar al-Assad told in unequivocal terms to a high-level Russian delegation visiting Damascus on Friday, “At the current phase it is necessary to focus on putting an end to aggression and on the pullout of all Turkish, US and other forces illegally present in Syrian territories.”

Is there daylight between Moscow and Damascus on this highly sensitive issue? Turkish President Recep Erdogan’s forthcoming meeting with Russian President Vladimir Putin in Sochi on October 22 may provide an answer.

Clearly, the US hopes wrench Turkey from the Russian embrace. Moscow’s studied indifference toward the US-Turkish cogitations betrays its uneasiness. Conceivably, Erdogan will expect Putin to take a holistic view, considering Russia’s flourishing and high lucrative economic and military ties with Turkey and the imperative to preserve the momentum of Russia-Turkey relationship.

If the US policy in Syria in recent years promoted the Kurdish identity, it has now swung to the other extreme of stoking the fires of Turkish revanchism. This is potentially catastrophic for regional stability. The heart of the matter is that while Turkey’s concerns over terrorism and the refugee problem are legitimate, Operation Peace Spring has deeper moorings: Turkey’s ambitions as regional power and its will to correct the perceived injustice of territorial losses incurred during the disintegration of the Ottoman Empire. The ultra-nationalistic Turkish commentator (and staunch supporter of Erdogan) wrote this week in the pro-government daily Yeni Safak:

“Turkey once again revived the millennium-old political history on Anatolian territory. It took action with a mission that will carry the legacy of the Seljuks, the Ottomans, the Republic of Turkey to the next stage… It is not possible to set an equation in this region by excluding Turkey – it will not happen. A map cannot be drawn that excludes Turkey – it will not happen. A power cannot be established without Turkey – it will not happen. Throughout history, both the rise and fall of this country has altered the region… the mind in Turkey is now a regional mind, a regional conscience, a regional identity. President Erdoğan is the pioneer, the bearer of that political legacy from the Seljuks, the Ottomans, and the Turkish Republic to the future.”

Trump is unlikely to pay attention to the irredentist instincts in Turkish regional policies. Trump’s immediate concerns are to please the evangelical Christian constituency in the US and silence his critics who allege that he threw the Kurds under the bus or that a ISIS resurgence is imminent. But there is no way the US can deliver on the tall promises made in the joint statement. The Kurds have influential friends in the Pentagon. (See the article by Gen. Joseph Votel, former chief of the US Central Command, titled The Danger of Abandoning our Partners.) Nonetheless, the main outcome will be that Turkey feels it has western support for its long-term occupation of Syrian territory.

All in all, it’s a “win-win” for Erdogan insofar as he got what he wanted — US’ political and diplomatic support for “the kind of long-term buffer zone that will ensure peace and stability in the region”, to borrow the words of Vice President Pence. A Turkish withdrawal from Syrian territory can now be virtually ruled out. State secretary Mike Pompeo added at the press conference in Ankara on Thursday that there is “a great deal of work to do in the region. There’s lots of challenges that remain.”
Pompeo said Erdogan’s “decision to work alongside President Trump… will be one that I think will benefit Turkey a great deal.” Arguably, US expects Turkey’s cooperation to strengthen its strategy in Syria (and Iraq) where it seeks to contain Iran’s influence. From Ankara, Pompeo travelled to Jerusalem to brief Israeli PM Benjamin Netanyahu. “

The Kurds have 120 hrs to fortify their positions together with SAA..no choice for them…