The map depicts the military situation in North Aleppo on June 12. Pro-rebel sources argue that the ISIS terrorist group is attempting to infiltrate in the city of Marea. However, no major clashes have been reported. 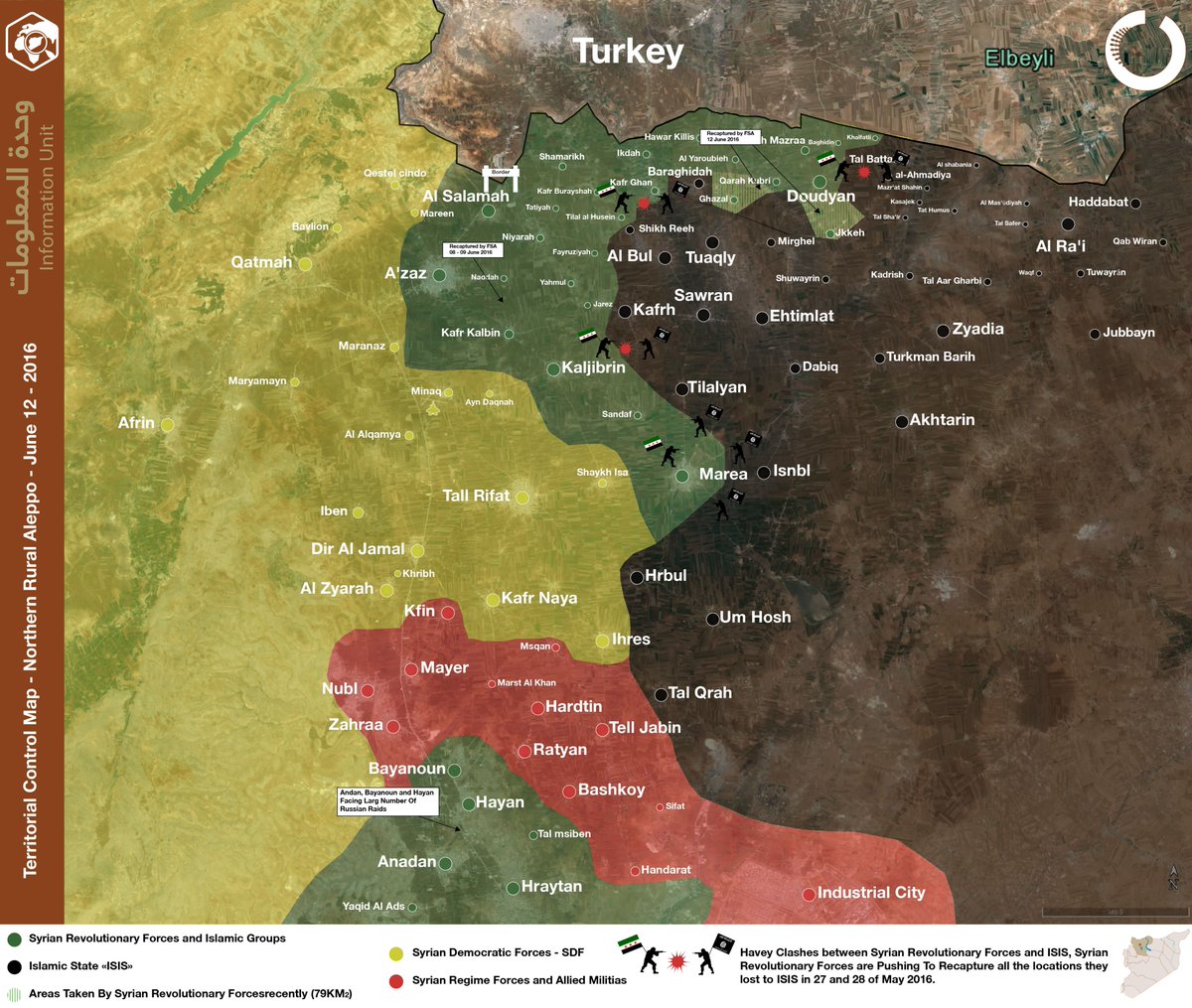 “if a dog bites you, don’t hold the dog responsible, go after the owner.” [Vladimir Putin]

It is self evident that until the spigot (facilitating the flow of arms and militants into Syria) is closed, the conflict will continue to be fuelled. This of course is an objective of the anti-Assad bloc (to slowly bleed the Assad aligned coalition forces and concurrently to engineer another Afghanistan for Russia, an objective revealed through statements by various officials).

As such, it is not only the militants that need to be targeted but also their sponsors need to experience consequences. The nature of such consequences should be calculated but adequate to modify behaviour (and serve as a potent deterrent) and clarify there are no actions without consequences.

Until the sponsors (U.S., NATO, Saudi Arabia, Turkey, Qatar, Jordan, Israel, etc.) of the various militant/terrorist groups are made to cease their proxy warfare operations, the conflict in Syria will continue to be fuelled.

Note: It is worth observing Saudi Arabia, Turkey, Israel, etc., have state opponents that are capable of increasingly compromising their security and can present far more profound challenges for these states. Calculated responses can serve to change their behaviour.

Unfortunately the retrained responses of the Russian Federation has only served to embolden adversaries. In this context, I would respectfully suggest Russian officials consider releasing a document that states if sponsors are proven to be involved in proxy warfare operations/support of terrorist groups, they will be held accountable for their actions (that constitute acts of war/ aggression).

The message should be calm but clear. Upon establishment of proof, the Russian Federation would reserve the right to respond in a manner and time of its choosing . Various other mechanisms can also be employed (legal, economic/sanctions, etc. but I would suggest these would be ineffective).

I would argue that responses short of clarifying ‘red lines’ will at best merely maintain the continuation of the conflict while at worst (and more likely) will see an intensification/expansion of proxy warfare operations. Calming the situation will not occur through conciliatory rhetoric. It will only be achieved through credible deterrence.