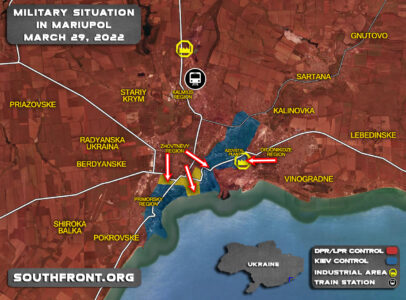 why this map is not update…???Last couple weeks you have delays but serious delays..

O south front Yesterday we just eliminated another General and 860 Russian soliders. Plus 17 aircraft downed. Russian army on all front are retreating. Including Mariupol. Russian army is in disarray at the moment. Even the leadership of separatists has confirmed that the future of Dontesk Luhansk and Crimea is in doubt. We just created our no fly zone over Ukraine thanks to USA UK AND NATO using the new anti air equipment received If I would be a Russian I would think 100 times before putting foot on Ukraine land. Ukraine I’d the land were Russian army will fertilise the sunflower Lands. Welcome to Hell Russian Orcs.

WTF are you high on Ukrop? Got nothing to say except your delusional fantasies now that your little nazi pals in Mariupol are almost all dead.

Yeah. I think Ukraine will have military parade for victory day in Moscow. And at the christmas you will attack China from Vladivostok region 😂😂😂 Dream on. It’s not forbidden, just couterproductive.

the end
Reply to  Welcome to Hell Russian orcs

Since Ukrainians and Russians are all Slavs, that means by your definition, they are all Orcs. You are highly likely not from Ukraine, so you must be another paid shill or trolster, or mothers retard, not able to get real productive and useful job, so you have to pick up such low jobs as being a troll for Jewish ass. Must be a real accomplishment in your life, I wonder what lies you say to your kids, what daddy does in his scum life to give food on the table. You are funny, but it ends here, nothing more to it.

Last edited 4 months ago by the end
13
Reply

Khazarian Agent
Reply to  the end

Vlad the imposter
Reply to  Welcome to Hell Russian orcs

“Yesterday we just eliminated another General and 860 Russian soliders. Plus 17 aircraft downed. Russian army on all front are retreating. Including Mariupol. Russian army is in disarray at the moment.”

Then I realized my X-box froze playing Call of Duty, the glue bag I was sniffing had fallen to the floor and it was all a dream.

I’m American and I can tell you with honesty that peoples eyes are beginning to open and many here are starting to realize that the deep corruption and collusion with Ukraine and the Biden family is the purpose for the USA interest in Ukraine. Many like myself are now seeing what kind of threat Ukraine was and still remains to be for security. The images of your fascist and nazis have began to leak into main stream and not for too much longer can the charade persist. It is obvious that within enough time Russia will prevail and it is known that NATO nor USA nor EU is coming to fight for you. Ukraine got used like a prostitute and now it’s time for that Prostitute to pick up her belongings and leave because the sex is finished.

I’m in Australia jayhoot and the situation is changing here too. The original 100% support for UKR is slowly diminishing although most of the public fed by main media spoon is still pro-Ukrainian. Have look at: https://www.youtube.com/c/PatrickLancasterNewsToday/videos

You believe this stuff man? Shouldn’t you then liberate all your lands if you can kill 800 soldiers in one day?

someone
Reply to  Welcome to Hell Russian orcs

Copium is a hell of a drug…

For the neo-liberal ass fuckers Ze faggots we must define some military terms: when a town hall of a city is taken, FORMALLY the city is CAPTURED, you son of a retard cock on a monkey pussy.

ROTTING CORPSES OF GAY BANDERITE FAGGOT BITCHES. THEY EVEN SUCKING DICK AS GHOSTS

Man these guys backed by Western media running their mouf that Ukraine winning the war. How can we shut them up? Should Zelensky be sent a Kinzhal?

and then bulldozer it to the West and start all over!

looks like that little blue areas is completely surrounded. Sucks to be them

The Azov-faggots are being sent to hell one by one. They cry on Telegram all day long.

Once all the remaining Azov nazis are trapped in the steel plant, I’m guessing it will be a matter of gas or flamethrowers/thermobarics to put them out of everyone’s misery.

Last edited 4 months ago by The Saint
0
Reply

make everything east of dnipro neutral or flaten kiev. there is your deal dipshits. should have let donbas be free. now your fucked by following lil rat zalensky. maybe ukraine needs to know how their poor neighbor feels. wake up call. every time i research a ukraine claim of victory i see lies. if you lie so often you must be getting asses kicked.

How’s that “territorial integrity” stuff working out in Donbass? Got a welcome party ready for the US Sixth fleet in Sevastopol for next week?

Can someone please explain the overall Russian strategy in Ukraine, because from what I have read (on SouthFront), the forces committed in Ukraine by Russia are roughly equal to the Ukranian forces. Russia seems to conduct more or less a strategy of a very long front line, which seems to go three quarters of a circle around Ukraine.

In the defense, you have an advantage in being able to prepare ground works, while having the disadvantage of needing to spread out your forces. Right ? In the offense, you have the advantage of surprise and concentration of forces, so that you outnumber the enemy locally (“defeat in detail”).

Not only does Russia seem to conduct a strategy of surrounding the enemy, without having 10 times more troops, there was also the reporting about failing to bring up the rear and supplies to the front. Does anyone have any theories about why this happens ? This is Russia, which is a long standing Empire, they have fought all kinds of wars, so personally I will find it hard to accept that any of this is a mistake. I think Russia is far too smart to make any sort of mistakes like that, also because this is clearly a consequence of a long prepared plan, rather than some sort of emergency decision making based up on unpleasant developments.

I can also theorize about why this is happening (which leads me to believe USA and Russia are working together to bring about World War 3, together with all the other gangster run Nations; slowly edge humanity into the war, don’t hammer Ukraine hard and create too much panic, draw it out, fun and games for the newspapers while the central banks are busy printing money), but it would be interesting if someone else has some ideas ?

Good point but if you look at the original objectives: demilitarize/denazify/Donbas then Russia is slowly getting it. Not sure about the Kherson/Zaporizhina though. Maybe it will be autonomy Novorossiya of Ukraine or Russia

Indeed . But clossal financial cost and unforgivable loss of lives. Why when as it is we humans are perishables and should co exist ? How about the future of the Ukranian child?