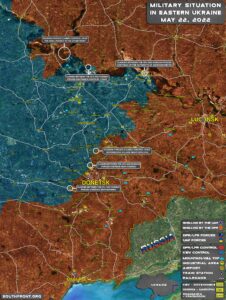 Hopefully, Russia and Ukrainians will soon unite and put up a united front against NATO, the ultra right, the Poles and mercenaries, Brits, US…

I make more then 12,000DLR a month online. It’s enough to comfortably replace my old jobs income, especially considering I only work about 11 to 12 hours a week from home. I was amazed how easy it was after I tried it…….. 𝐖𝐰𝐰.𝐁𝐮𝐳𝐳𝐉𝐨𝐢𝐧.𝐜𝐨𝐦

You can hope. So far the Russian forces seemes to be a hobby for Nato.

I thought the USA was a real deal, but since they can’t even produce formula for their babies, but have to import it from Germany tells a lot about the country.

Your mind is full of mental gymnastics and deflections.

Is anybody surprised that USA always lies to his own people ? WEAPONS OF MASS DESTRUCTION. Outside USA nobody believe what USA says.

What makes you think Russia is free from jewish influence and collusion? Or the fact Russia harbours Chabad rabbis you can learn more about here: https://odysee.com/@KnowMoreNews:1/Esoterica-Kabbalah-Secrets:1

Ukrainians won’t unite with Russia. Now Russia ignores this by pretending the bulk of the Ukrainian resistance are “Nazis” or “mercenaries” to deflect from the fact Ukraine does not want to merge with Russia.

Both Russia and the West are jewish controlled, the ulterior motive for this war is to provide an excuse for inflated food and fuel prices in order to break the world economy and provide a pre-ordained solution to the problems they have caused.

You also have to take into account why China is essentially starving their population over more Covid nonsense. They refuse to let most cargo vessels into the piers, sparking domestic food riots and supply shortages worldwide. 80% of China’s food is imported, the consequences will be dire for the Chinese.

NOT ALLOWED TO VOTE FOR THIS COMMENT, NOT UP AND NOT DOWN EITHER?

The western hohols were seduced by evil, they can’t even reconcile that they were unfair with their eastern ethnic neighbors.

Nothing can move forward until the DPR and LPR are considered legitimate.

Russia needs first to get rid of nazi-fascists ukranian, and this is no easy since ukranian people has a jew-nazi fascist president.

Mariupol was 100% liberated
Reply to  thoughtful

The guys at Popasnaya did a wonderful job, they might very well chock Severodonetsk in any days… even if the guys in Izyum take more time to achieve their objectives. Wagner G. has been sent shorty before the full liberation of Popasnaya so this front is going to be really solid.

DPR has already stared transfering troops from Mariupol and I know the front is going to be pushed toward central Ukraine. DPR fighters are passionated and very anti-fascist, especially батальон Спарта, It’s going to be good for the moral knowing Donetsk is safe from daily shelling…

Here, Russian Forces aren’t trying to create one big cauldron, they are out for the kill!

You are copying their vocabulary identical to how certain organisms can hide in a state of crypsis.

Too Big / Too Few Troops for a Grand Encirclement. This is the largest war since World War 2.

Russia and the west follow what the jews consider the left-hand path, a total inversion of classical patriarchal civilization and replaced with a matriarchal one with a complete inversion of values.

Ukraine could’ve followed the Minsk agreement signed by Porkyshenko, and non of this would’ve happened. Instead they’ve chosen violence and nazism and there they have it. Ukraine will be way smaller after the war thanks to the Nazi machinery. Very sad.

Correct. You can also blame Nudalman and her ilk for the cause of it.

Zelensky is just doing his job just like Lenin did. Get as many slavs killed as possible. House Rothshild sends their regards.

Can the introduction of Polish batallions directly involved in the Ukraine conflict be verified? Not that they will not be ground to worm food, but how is this not direct involvement by NATO FORCES.

When you start sending batallions of foreign fighters into active combat zones, your body bag count is gonna go way up. Looks more like mission creep every day.

It can’t be Poles, I haven’t seen any horses galloping around Ukraine recently.

Just you wait until the Poles send in their high tech Cyber Winged Husars. With Lazers shooting from their horses eyes. This will show dem russkys. ;-)

Poles just want to take over historical Polish teritory such as Galicia and Lvov. It will be another front for Ukranians, very soon.

Lvov was invaded by Pooland 100 years after its origin.

No matter how this war ends, all Russians (sadly also the innocent ones) will suffer in isolation. The stuff which they made to innocent people is beyond forgiveness!!!

The “progress” which You are claiming here is nothing more just a “destroy and move to destroy next” style of progress.

I think we can now say it aloud = RUSSIA is FACISTS state, because it clearly have all the marks of it.

The problem is if we can afford winning. The people in the west will loose much and to know the russians lost more will not help anyone who looses his job or does not get food on the table.

The Schwedt Refinery is only suitable for the russian (and venezuela) kind crude oil. And this Refiney is supplying much of east germany inkl. the capital berlin with gasoline.

Isn’t it great how the green will be able to take cars away from people and shut down the economy (which they allways wanted) but not get to to pretend it’s just cause of putin.

A win win for the greens and the global finance guys.

The great reset like we planned but we put all blame on russia.

Please die in a fucking fire.

All the innocent victims, together with all the death and destruction, were created by US-NATO and their paid stooges like Zelensky.

The Universal issue is: ” who has the right to be rightful sovereign of the earth and universe”.