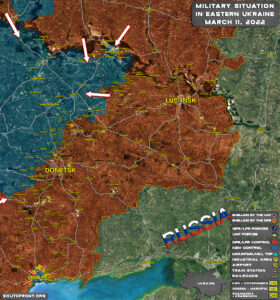 If Putin had stuck to the Dombass region when he decided to invade Ukraine he wouldn’t have had another tank column obliterated this morning in Kiev, and another general killed. Because the are no fucking neo nazi battalions in Chernobyl.

The abysmal intelligence levels of the average ukronazi on display once again, folks!!!!

Invading another sovereign state, killing civilians and using propaganda to control your own population are the actions of a fascist, egotistical, madman. Look at Hitlers early years and his excuses whilst German Chancellor for his many sins and the script is very similar.

Why have we not learned anything from history?

The people who suffered the most under Hitler were the Germans. Are the Russian people going to pay a similar price under a tyrant like Putin?

Guy, the so called Occident is done, over, is no more hegemonic on Earth. All you wrote is more or less what people all around the world thinks about the so called occidental leaders. They see them as brutal and disguting colonizers. No wonder that the populations of Africa, Asia, South America (and not only there) feel no simpathy for the NATO side.

Comrade, yes the east is developing their economies, still terrible inequality, and authoritarian regains ruling in most nations, but hopefully with improved living standards they will demand that their voices be heard.

But I do have to disagree with you on more nations supporting Russia then Ukraine. The only nations supporting Russia are the authoritarian, pariah states who’s tyrants stay in power through fear and violence. Does any body want to live in: Myanmar? Syria? Iran? Cuba? Belarus? Venezuela? North Korea? No they have a net emigration to the occidental nations. If your only allies are these pariah states(looking at you Putin) you know you have poor leadership qualities and descended in to a tyrant.

As for “brutal disgusting colonizer” why are so many formerly colonized people Line up to come live under the law of their former colonizers?

Bricks, CSTO+SCO are 4.6billion people. The crumbling americant empire and vassals are less than a billion. Skip projecting Trollstoy 🤗🤡

Good for the BRICs rising tides raise all ships. But what’s your point? The brics are not aligned China and India are rivals, Brazil has condemned the Russian invasion. China may view Russia as a former colonizer. The BRICs aren’t going to bail Russia out of this mess. CSTO, lol Russia is the strongest member and is struggling with an under trained and supplied Ukrainian group of partisans.

Turkey and Greece are rivals and both are members of the NATO. China and India are both members of the SCO and Brics. So your argument fails right there.

U.S. is the strongest in NATO as well, and they failed in Iraq, Lybia, Yemen, Syria, Afghanistan. Russia aint struggling. U.S. would do far worse.

Yet Ukropistan is still failing. Better luck next time Trollstoy 🤗🤡

The only pariah state is the crumbling americant empire.

People see those who have invaded and massacred all the rest of the world, since, lets say, the year of 1450, all barking now militarily against Russia. And the map you need to consult is the charter of the russian economic, politic and informative retaliations against actual hostile countries. All the others, those who aren’t hostiles to Russia, are fighting the so called Occidental world in this new world war. The saying “commerce (and information, and politics) is war” gains here an curious meaning. This WWIII only isn’t globally military because in the following day of a global war Einstein’s sticks and stones wouldn’t be used by nobody.

In Romania I can confirm 85% of the men are not willing to die for NATO in any circumstances. The state of the mind of the majority of the peoples here is: ”i do no fight for Lidl, Kaufland, Brico, Renault, Carrefour, McDonald, ant the list would go on and on, which own 80% of the country capital. Nor for the transatlantic transnationals who also own 40% of the agricultural lands…….NEVER, never, never. If, by some american deep state agenda, by violating our Constitution and laws we will be forced to fight against the russians I can GARANTEE there will be MASS DESERTIONS. or at least, me and my 3 sons we WILL NOT GO to fight russians for the NATO, a hegemonic satanist organisation.

The irony of the comparison.

There are many similarities between the Ukraine situation and for example Hitler’s territorial expansion into Czechoslovakia, but the irony is that to anyone who knows the history, this comparison – surely intended to delegitimize and be denigrating and derogatory – is actually flattering to Putin.

Czechoslovakia was created by outsiders who had actually promised Europe’s populations self-determination; so, it was a lie. It was also an attempt to pull population and resources away from a large Central European state and put a small assortment of Poles, Hungarians, Czechs, Slovaks and Germans together who could not agree on anything and didn’t want to be there. The point is, to suggest that such an injustice is compatible to the present, the comparison should actually be favorable to Putin. And let’s not forget how the Czechoslovakia was dismantled: with Slovakia declaring independence and Hungary, Germany and Poland taking what they wanted, which involved practically zero bloodshed and destruction. If Putin could have been just as successful with the Donbass and Luhansk, especially after his early, swift and impressive move on Crimea amidst Maidan, which was very impressive at the time, he would be probably the best military geopolitical strategist of the modern era.

And no – a comparison to the incorporation of Austria, Hitler’s homeland, a state that had also been promised self-determination only to be reduced to a speck and forced to have a different currency and even uphold border tariffs, is no less of a compliment to Putin.

Nazi is a political epithet code word invented by Jew Konrad Heiden in the 1920s to denigrate the opponents of social democrats and communists.

The truth is the side you are calling Nazi uses that same epithet just as much as you do. It is led by a Jewish comedian and directed through funding tied to Israel and the US, two countries which can’t ever seem to get enough of calling other people Nazis and taking advantage of that.

Sounds like what the U.S. is doing since the end of WWII… Ukropistan was never sovereign by the way.

Do not worrie we are ready. You know we will listen Cajkovsky, read Dostojevski and be free forever. Why you are in such panic on the west? If you are in right why are stoping Russian media? You do not won’t listen our opinion, no problem we will come to you to explain you in person.

“Invading another sovereign state, killing civilians and using propaganda to control your own population are the actions of a fascist, egotistical, madman.” … indeed and that is why I am devastated to see my Country – the UK in such a predicament.

Anyway, take our Brigade 77 or equivalent – wannabe soldier, dumb propaganda back to the Daily Mail, BBC or CNN and talk to like minded other stupid folk; people like you embarrass our Countries.

Shame on you Russia! Before the war started I understood certain worries of the Russians. Some had legitimacy to be discussed. But whatever the reasons,nothing justifies this barbaric invasion. Only in Kharkiv 48 schools were bombarded. We see images with villages razed to the ground, no water, no electricity,…no respect not even for the Russian speaking civilians ,look to Mariopol, razed and a lot of its inhabitants are Russians. Compare to the wars fought by the Americans, the bombardements were it in Bagdad, Lydia, Kabul or Serbia, we didn’t see villages and cities completely destroyed and razed. It’s barbaric and even the support they could had in the East almost is lost. Now almost all of the Ukrainians hate Rússia. Nothing justifies this war. And in special the dimension of the attack, the places were is taking Place all over Ukraine and its brutality with bombardments that can be considered war crimes. Shame on you Russia.

this is because ukranian neos hide in schools and hospitals and roofs of those,

Hey what’s with all the Mexicans posting today?

Dorian
Reply to  Not a mexican

Fake names of the butthurt

jorge
Reply to  Not a mexican

The Mexicans are also against the USA and the European Union, or, if you prefer, all the NATO. Read what has said the mexican president yesterday.