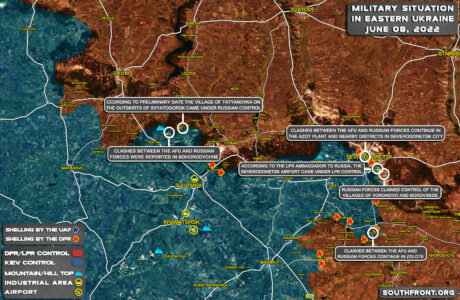 Russia is in command. Very good results so far.

It a very serious setback for the Kiev Jew regime. Russians as I stated earlier are masters of adaption and they learnt the scale of NATO involvement very quickly at Kiev, and after few short sharp skirmishes, they reevaluated their goals, tactics and understood the scope of sheer amount of NATO weaponry that had been pouring into Ukraine since 2008 Munich conference which was used by NATO and US criminals to stage a long term conflict with Russia using Ukraine as the testing ground for a larger delusional Yugoslav scenario for Russia. However, after entering the suburbs of Kiev in a not very well planned haphazard operation, the Russians quickly replaced low performing Soviet era generals, and they scaled back their ambitions, resorted to fighting by the time tested Soviet textbook. Use mass air power and artillery and then mop with specialized urban warfare units like the Spetsnaz and Chechens.

The arrogant west has squandered the precious opportunity to capitalize on Russian shortcomings early on. Such opportunity is only given once. The Russian advantage, even though costly is that its highly motivated generals and senior officers tend to fight from the front and even though suffer losses, it has a very strong positive impact of the ordinary soldier when he sees generals fighting in the trenches with AK in their hands.

It’s summer now, the front has unfolded, AFU is exposed to Russian rocket and airpower, and the Nazis have supply issues as Russians are damaging critical transport infrastructure. All the major railways east of Dnipro have been ruined and can’t transport NATO heavy weapons.

When the winter will start, we will see less fighting in the field, and even more brutal losses to the battered AFU from Russian artillery. It will be then when the bets will rise to bigger cities, as fleeing AFU will pull their forces there. The Russians will surround the cities and pound them, only the overthrow of Zelensky can save Ukrainian lives now.

They can afford to lose ~a company or so per week, and get resupplied at least 2 battalions of fresh troops per week. The battered Ukrainians can not afford large losses as they have lost the skies as well and can not move even small units.

Russians also still have huge advantage in long range artillery rockets, SU-25 ground attack aircraft and above all the KA-52 workhorse of Operation Z, which has proved immune to SAMs, and NATO manpads.

Ukraine still cannot use any of the $130 billion plus Western gifts offensively as its cannon fodder of experienced troops is dwindling and can not be trained or replaced. In any modern military it takes over 2 years to make a soldier proficient in weapons systems. Most NATO weapons are too complex even for an average western grunt, let alone dumb illiterate Ukrainian cannon fodder with no combat or weapons experience. Russia has a peace time reserve of 2-3 million trained soldiers and can fight on indefinitely.

Russian losses are now minimal and AFU losses exponential. There is no doubt in any sane mind that RUSSIA IS WINNING AND WILL PREVAIL. The Ukrainians should listen to the old realpolitik Jew Kissinger and midget Macron and sue for peace. The victorious bear will get what is wants.

I get over $25k a month working part time. I kept hearing other people tell me how much money they can make online so I decided to look into it. Well, it was all true and has totally changed my life…This is what I do, check it out by Visiting Following Link open here………… 𝐜𝐚𝐬𝐡𝐬𝐢𝐭𝐞.𝐭𝐤/

comical ali? is that you? Nice to hear from you again…! We will roast them !

I would love to get links to all his claims. Where on earth this genius gets all his information/ numbers from?

Thanks for the great analysis

I mean DüFaZ Putin wouldnt conscript folks for too short time,if they couldnt be trained to be effective soldiers

Interesting that you are referring to Ukrainian “nazis” and at the same time “the Kiev Jew regime”. I guess you are an expert in nazi ideology.

Please wrap up the Donbass so we can focus on Odessa, that Russian city has to be taken

Making every month extra dollars by doing an easy job Online. Last month i have earned and received $18539 from this home based job just by giving this only mine 2 hrs a day. Easy to do work even a child can get this and start making money Online. Get this today by.

Very soon, I’m going to have an Operation Z Victory Party. I will invite friends, neighbors, and family. I will also extend invitations to all pro Ukrainian bloggers, propaganda mouthpieces and blowhard Ukranian gasbags. I expect all the former to show up and celebrate with me. The latter, well, they can all suck limp UkroNazi dick.

Muhammad your Prophet
Reply to  Always_Z

And don’t forget to bring the dog you love to sexually molest. We all know how freaks like you love to rape anything that moves.

Last edited 3 months ago by Muhammad your Prophet
-11
Reply

Calm yourself you kike troll, relax. Pop over to the Rabbi’s house for a glass of baby blood and some foreskin nibbles!

Muhammad your Prophet
Reply to  Machi

I suppose that you’d love to join him on a puppy gang rape. That’s your thing, right?

Fear not, G2 Russians know how to pound an octopus on the stone. A+ for the Russian Warriors !

Zelensky confirmed that the RF is more powerful

Have you noticed that Ukraine’s camouflage is not green, but the color of shit? Apparently they are immediately given to understand who they are and what they are. So that they know their place.

The latest update is that the Putin cockroaches are hacking the phone numbers and sending death threats to Ukraine soldiers. Just like when the Nazi cockroaches would go around throwing leaflets to threaten the Allied forces. The only problem is that Ukrainian forces don’t give a fuck if the Putin cockroaches can pin their cell phone locations. Even my mother can do that.

Kreen
Reply to  Muhammad your Prophet

Of course no proof but don’t let that stop you. Retard

Muhammad your Prophet
Reply to  Kreen

It’s not like proof is going to make a difference with a deranged lunatic like you. So what the fuck are you crying about?

10 days of training before being shipped to the battlefield is a ticket to hell. Ukrainian troops are better treated as POWs than by the Ukrainian army.

This war looks like a big game of mousetrap. The cheese is in the cauldron and Ukraine continues to supply at least a 1000 poorly armed mice a day into the trap.

Day after day, week after week the carnage will continue, until the NAZIS run out of borrowed money, NATO weapons, cannon fodder, resources and lies.

Me thinks the last Ukrainian to die in this war will be the clown of Kiev.

Are there any updates on the situation in the south of Ukraine, please? I can’t imagine that there is nothing to say about Kherson or Mikolaiv (?) at least, if not Odessa. Thank you!

The Caldron mouse trap snared 1000 mice today, just like yesterday and just like tomorrow, next week and next month. Me thinks the clown and cronies will run out of mice before this ends. The clown will be the last to die.

The clown will retire in Miami as a billionaire.

They have even forbidden publication of Russia’s military losses. Most likely a sensitive issue…Putin also cancelled his annual Q&A session. I guess to avoid questions about that.

In my country, the former land of the free (USA), everything is either forbidden or mandatory.