This map provides a look at the military situation in the Eastern Ghouta region near Damascus on August 15, 2017.  Government forces continued pressuring Faylaq al-Rahman and Hayat Tahrir al-Sham in Jobar and Any Tarma. Since the resumption of the operation in these areas, the SAA has made some tactical gains, but the situation remains complicated. Many will depend on the ability of militant groups operating in Eastern Ghouta to cooperate against government forces. 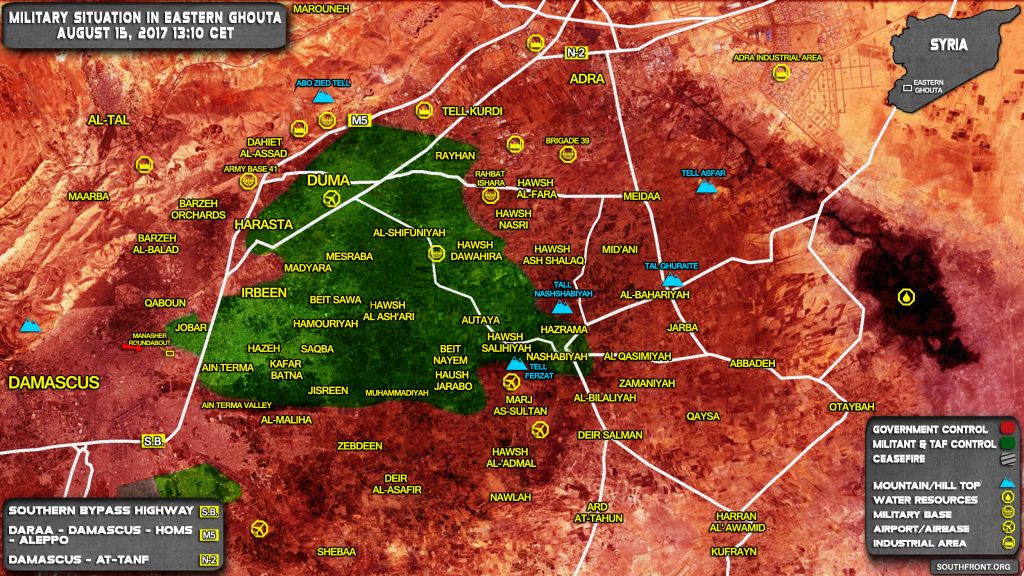 SAA is struggling in EASTERN GHOUTA and looks like FSA many time outsmart the SAA in this area. FSA has plenty time to prepare strong defences, which includes many tunnels that protects FSA against bombing from Air or from artillery. SAA should rethink it’s strategy and most likely have a team that will look for FSA tunnels and destroying those tunnels

That’s where the tunnels are. That’s why it is important to take over that area.

Why enter Jobar ? It’s useless. Better attack from the east. Isolate the dense area and let them die.

Just looking at the map I can see that Jobar cuts through a major highway that could otherwise be used for logistical purposes. And from what I remember from in detail maps is that Jobar is a built up suburb from Damascus, a dagger into the city which allows the headchoppers to fire their artillery and mortars into the city.

It’s also a sailliant and the SAA loves to cut off enemy sailliants as its way easier to do so then launch full frontal assaults on straight enemy lines.

Indeed. Very good point for the highway. I think that it’s the primary reason of attacking Jobar.

Yes the highway is most likely why SAA trying advances in this direction, but not at all cost. SAA need to think strategically and tactically. You can’t try break the wall that the will is unbreakable. You need find another spot/area to be successful and be able penetrate.

There are important tunnels there and it is the closest point from which the terrorists can launch mortars towards Damascus.

The government wants to push them away so things get quieter in Damascus.

The reason this Highway is crucial is because this is the designated Highway for the Humanitarian aid to come through and the Terrorists groups can’t be trusted, since the US wants the aid convoys on this Highway. Their is also a chance to eliminate a supply line for these terrorists, which would be a great benefit in the long run. This would send a message to the Terrorists their days are numbered.

This battle for Yobar and Ayn Tarma is going on for months now and so far, no ground-nreaking progress has been made by the SAA and its allies. From the footage I have seen so far, it´s a bloody and messy battle involving a lot of casualties on the SAA side. Quite simply said, I feel for the soldiers who have to fiight under such extreme conditions. As far as I have seen, very heavy equipment like the mine-clearing vehicle UR-77 have proven to be effective in this urban environment. But the SAA needs more heavy stuff and use it carefully, since the terrorists there are bunkering heavy and since they are equipped with massive supplies of anti-tank guided missiles (who knows how so many supplies have been smuggled into that “pocket”). So this could go on for many more months……..light infantry units storming houses, trenches, tunnels……obviously with the aim to cut off Ayn Tarma from Yobar along the highway that transcends these districts………….or maybe it would be a resonable idea to rethink the entire strategy. Anyways, I have the highest respect for the soldiers fighting there. Hopefully Al Masdar New´s report that rebel defenses in Ayn Tarma are about to collapse holds true this time and soon they will be forced to surrender