On March 18, pro-government forces reached the ISIS-held city of Deir Hafer in the Syrian province of Aleppo. Government troops liberated the Um Al-Murra village, the Al-Murra hill and got a fire control over the southern part of the city.

If government forces, led by the Syrian Army’s Tiger Forces, are able to secure al-Aamidiyah, they will likely attempt to develop momentum and to enter the western part of Deir Hafer.

At the same time, government firces will advance on Jannat al-Salamah and Tell Akovlah in order to further encricle the ISIS-held town.

The control over Tell Akovlah will allow government troops to cut off the road heading at the western countryside of the ISIS stronghold. This will lead to a rapid collapse of the ISIS defenses in the area. 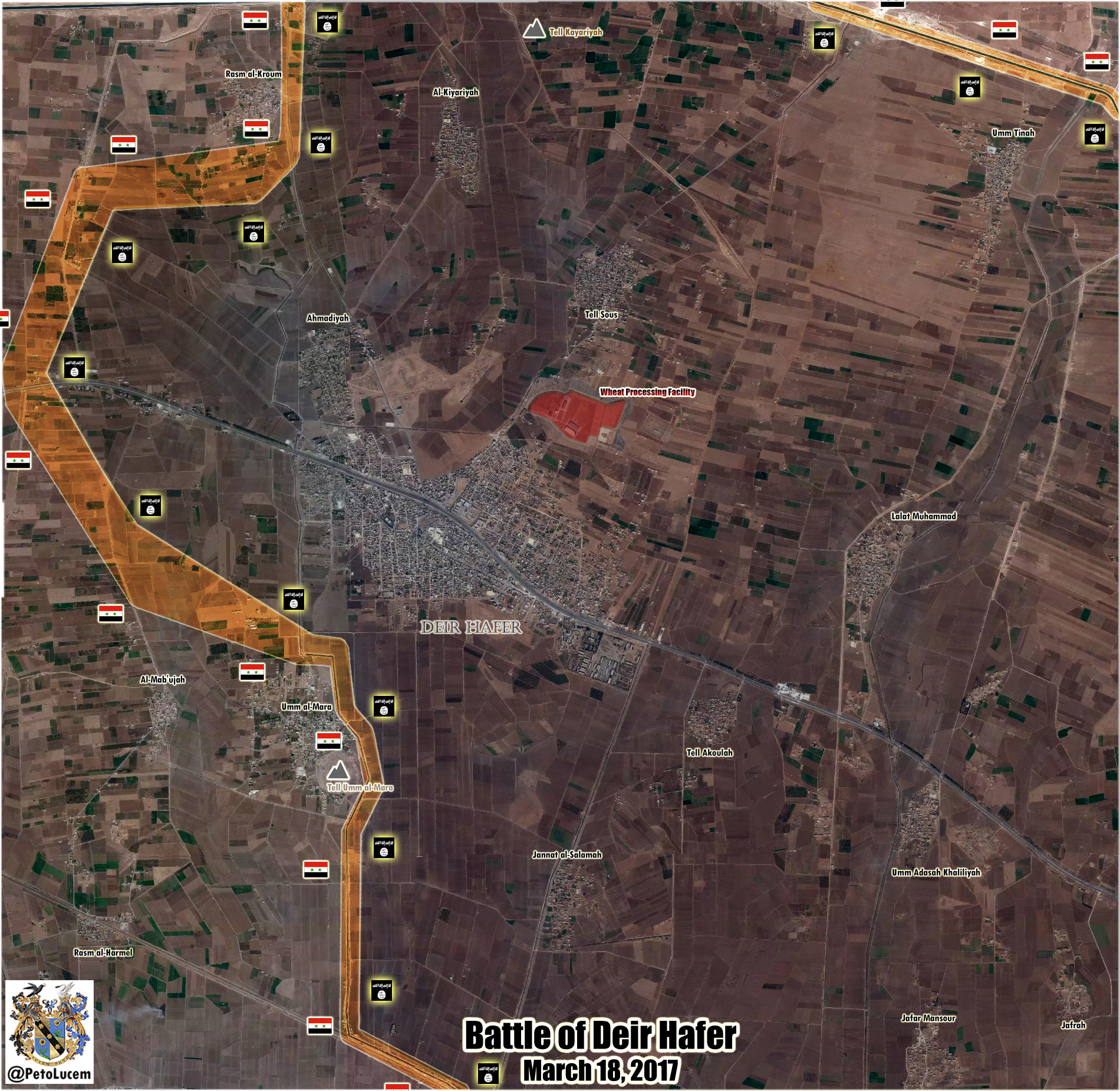 Peto lucems maps are the best!

After the war he sholud gather them in 1 book enad sell them. for symbolic 1 dollar, but if buy 10000

people, he get some money.

Very nice map. I think SAA should cut the road first and encircle. ISIS defend well in urban areas if they intend to hold it. Take Deir Hafer after most defenders have left. Easier to destroy Deash in more open terrain or on the road.

I imagine the SAA are leaving an open lane for them to retreat. I don’t think they want to corner a wounded dog that has to fight to the end. They would rather self preservation force ISIS to retreat and leave the city without much of a fight.

Mine the road first, then leave them an out.

TOS flamethrower and flatten this village. end of discussion. dont know what the SAA is always moving and trying… seems not to be the best motivated fighters

Uh’Murikkkan style? No thanks, the SAA will fight morally and ethically to target the terrorist scum and harm the Syrian people as little as possible.

The Wahabbi portion of the population however? – kill them like the cockroaches they are….

cockroaches are high in protein, shouldn’t be insulted.

And again you want to see Syrian cities and villages “flattened”. Along with the civilian populations? This is not a NATO or Centcom operation!

Neither side has very many fighters on the front line so the SAA conducts probes to find where ISIS has weak defenses then moves in from there. ISIS does the same to recapture lost ground, like the areas by the airport now back under their control. The SAA might of withdrawn their troops from those locations to be redeployed elsewhere to bolster defenses or put pressure on ISIS at other nearby locations knowing that Daesh lacks the manpower to come out and run them off. The SAA was collasping when the Russians and Iranians stepped in and probably would do the same if those two suddenly pull out. That country is still a mess where tribes, criminal gangs and local strongmen still have their own militias who are aligned with whatever stronger faction that is in charge of the area. The Kurds have the same problems yet seem to be able to get them under control at a faster pace.

SAA does not need very many to hold the canal line, there are just a few road crossings. The Tigers may have held up around the airbase and Lake Assad. To resupply and reinforce. Hope to see this front become active within a few days.

Your are right with your contention about SAA lack of manpower. I do not think the government army has more than couple of battalions ( around 2,000 max) at any one front. First, they do not have the financial resources to pay them much in order to motivate them to fight. Unlike the Alawites and the Christian/Druze soldiers, the Sunni soldiers seem to have particularly shifting loyalties, fighting for whomever pays them more and the party that appears to hold the upper hand on the battle field.The SAA notorious lack of manpower in infantry has been plagued them for the past 2-3 years. You are right, that if it had not been for the Russians, Hezbollah and Iranian militias, Assad would have long shared Saddam Hussein’s fate.

The Russians should move fast to cut off route for US and Its cronies crossing the Euphrates before its too late. All these US reinforcements are not just for Raqqah. Mark my words.