This map shows the current military situation in the Syrian city of Deir Ezzor.

Government forces have made some progress against ISIS since the start of February, but they still are not able to link up the Dier Ezzor airport with the rest of the government-held pocket. 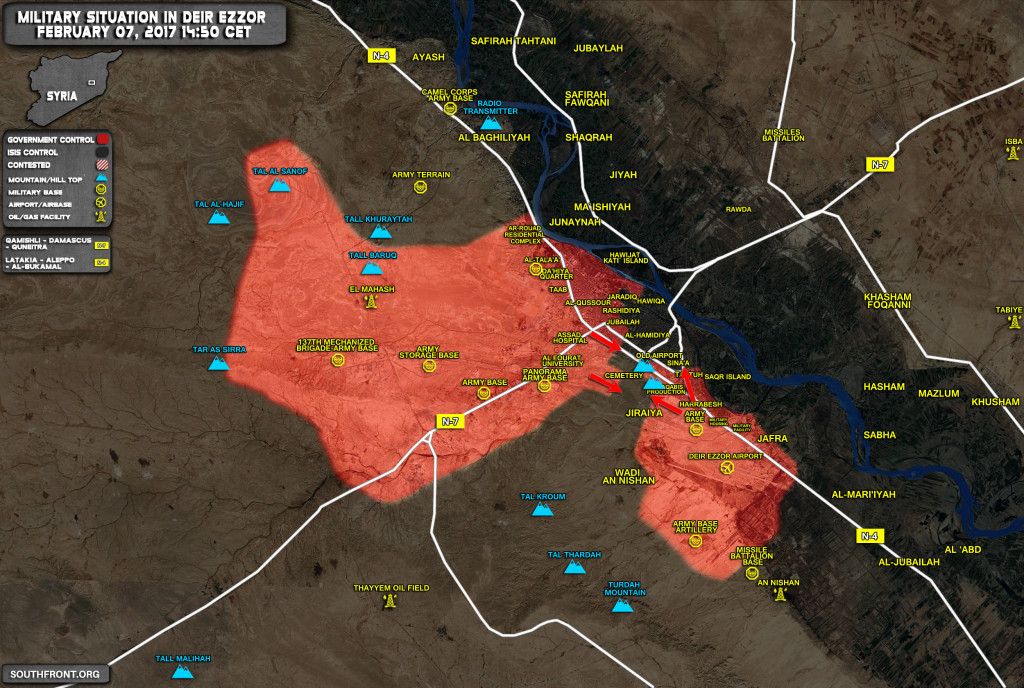 The SAA in Deir Ezzor are nothing short of heroic. For about three years they have been besieged by ISIS and have withstood. And frequently gone on the offensive. No other force on earth could have withstood this for so long. This is for the history books indeed. Look out Tel Aviv. No sleep for the pathetic IDF now.

Der Ezzor is like Rorkes Drift vs the Zulu…. that never stops. Syria needs to use Napalm and WP on the trash, … Who cares what the UN says…..Assad is blamed and condemned for everything already.

Once Deir Ezzor is liberated and there is a supply line, it would be great to see how well SAA’s overall defences increase in potency and effectiveness. The accuracy of mortars and shooting skills are impressive. They have Desert Hawks, Tiger forces and Liwa al Quds for attacks but the SAA units in Deir Ezzor are clearly unmatched when it comes to defences. Once the road is clear, be sure to see these units leading the security of the country, as the whole country is under siege!

If they were outmatched when it comes to defenses, they would have been overrun . not the case though. they are holding up admirably and heroically.

He didn’t say outmatched, he said they are unmatched.

You don’t know anytihing about Russian capabilities, it will go on for as long as necessary

Dude, obama and the crew said similar things about the Syria engaged RF forces in general, back in 2015/16. Well, the RF forces are still there and still kicking as-s and taking names. I believe the U.S. forces receives the most training and equipment of any military on earth, but I’d much rather we be friendly partners with the RF forces, than adversaries. A Roman broad sword is big, thick and lethal. In contrast, the Japanese samurai sword is thin, narrow and light weight, but I’d place book on the samurai, against the centurion in a one-on-one, no-hold-barred every time.

they use mostly gravity bomb , cheap and reliable thx glonass

I admit, I know only the public Web surface of any national miltary. I do not claim to know any more.

But given the information publicly available, Russia had not sortied these heavy bombers continously since it had began operations in Syria. It was not for a lack of terrorist targets. It is, most reasonably, explained as too costly.

These are heavy bombers which take hundreds of people to maintain, inspect, load and train the people who use them. Adding mission hours increases these costs. Let’s agree the bombs are cheap (no offense implied).

They are stationed in Russian bases flying thousands of kilometres, and requiring fighter escorts. This costs a lot of jet fuel and puts stress on engines and airframe that can lead to engine replacements and could shorten the operational life service of these bombers by years. Premature retirement from over use, accidents, and enemy fire can lead to unscheduled replacement costs.

Again, if it was cheap, russia would have been doing this continuously for the last 15 months.

There has been too many isis forces relocating from Mosul and Raqqa to Deir Ezzor. The only thing saving deir Ezzor from being overrun right now are these heavy bombers suppressing the attackers. I don’t know if Russia can continue this bombing for another three months. And I don’t see a ground offensive coming to save deir Ezzor in less time than that.

It looks like the a ground offensive to Deir ezzor is at least six months away.