This map proides a general look at the military situation in central Syria on October 27, 2017. The Syrian Arab Army (SAA) and its allies are successfully advacing against ISIS terrorists in the city of Deir Ezzor and in the area of T2 Pumping Station near the border with Iraq. 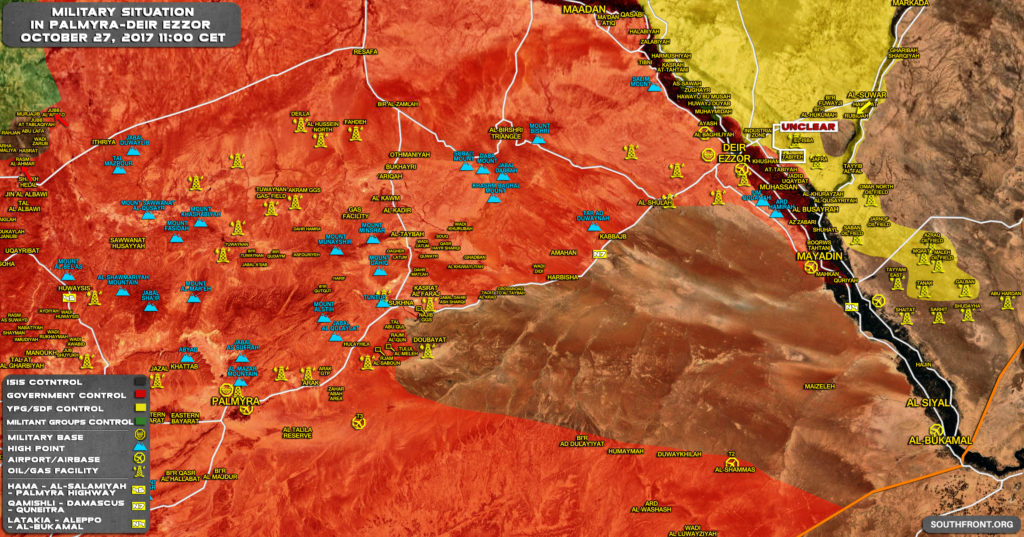 SAA needs to speed up if they wanna take Al Bukamal before SDF reaches it.

Iv’e considered this as well. Maybe the #1 priority for the SAA is saving lives by securing DE city. Either way, I can’t sit here on the other side of the world and pretend to know what’s best. Can only guess based on the information available.

Even if SDF reaches it, they can’t hold it. What happened (is happening) in Iraq is a prime example.

SDF cannot ‘reach’ Albukamal because SDF is not fighting ISIS. The supposed recent SDF gains w/respect to oil wells in the vicinity are not tactical but the result of local ‘reconciliation’ deals – essentially a bloodless exchange of the flag on the pole. This can be achieved in a non-urban environment. But, as proven in Raqqa there are enough tribal rivalries and foreign fighters to nullify such easy deals. ISIS would militarily resist an SDF move on Albukamal with the same force as they would against the SAA. Consequently SDF will not fight there. They’ll sit it out and take the easy low fruit as they have done throughout the Syria war. After ISIS is finished, the meter will start running for the SDF and their taskmasters.

yeah, good arguments. Still i don’t trust those yanks for a nickel.

Don’t fret, the only fools that should worry about trusting the US are their proxies! Let that sink in. Who other than the state of Syria and the SAA (and Iraq) has a stake in freeing Albukamal from ISIS control? Certainly not any Kurd, nor any tribal Arab element from the distant countryside. What claims can they make, and on what grounds? The US and Israel have the least claim of any to make. They will threaten and sabotage as long as they can, but their project is doomed to fail. Scorched earth may be their only policy. Ironically it will guarantee that they will never have any noticeable influence in Syria for generations to come.