These maps provide a general look at the military situation in central Syria.

The Syrian Arab Army (SAA) an its allies are crushing ISIS terrorists in the area north of the Homs-Deir Ezzor highway. Government forces have made notable gains south of the recently liberated town of Taybah. Also, the SAA allegedly conducted two successfull advanced in the direction of Deir Ezzor. However, this still has to be confirmed.

Government forces have also liberated the villages of Jani Albawi, Tal Albawi and Albawi in the eastern Hama countryside. 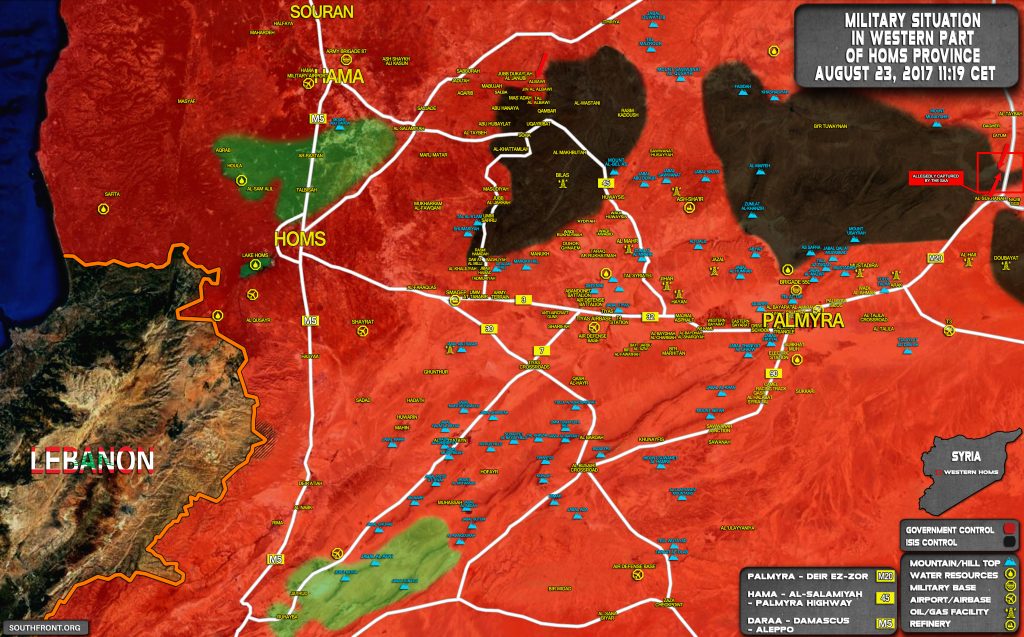 Tiger forces are moving along the Taybah – Bishri triangle axis, while the 5th corps are deploying along M20, both axis advancing towards Deir Ezzor. The move is intended to cut off any ISIS reinforcements in the proximity of Madaan – Deir Ezzor axis, with the intent of trapping them into a pocket, or causing them to move south of M-20.

Do not forget that the left side of the Euphrates have to be handled too…..

I disagree! 4 more weeks and maybe they will reach DeZ but there are many thousands still in DeZ province on the east side of the Euphrates!

The numbers of ISIS are less than 20,000 in Iraq and Syria and drastically reducing due to defections and air lifts out of the region by the US and coalition. There are less 5,000-6,000 on this side of the Euphrates , they are not as well placed to fight on the northern side. The attacks in the south are coming from Abu Kamal and Al Qaim region Isis days are numbered it just a matter of when not how many are left.

True, but they are too weak now and has no money so how will they put up resistance for so long when all the airstrikes will be in one area and all the tens of thousands of troops will decend on them soon. How will they last for more than four weeks?

What odds are there that the western corp-0-rat press will suddenly find a fake gas attack to blame on the Syrians?