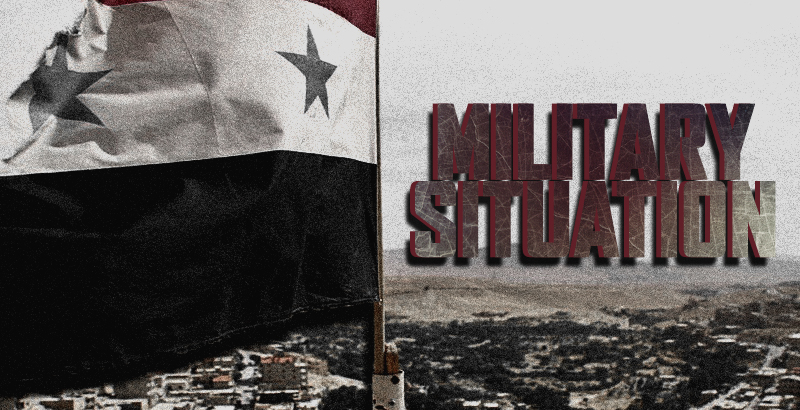 Today morning,  the Jaish al-Fatah militant coalition, led by Jabhat Fatah al-Sham (formerly Jabhat al-Nusra, the Syrian Al-Qaeda branch), launched a massive assault on the Syrian government forces in Aleppo city in order to lift the siege from militant-controlled areas of the city.

The joint militant forces involved into the operation consists of Jabhat Fatahl al-Sham, Ahrar al-Sham, Harakat Nour al-Din al-Zenki, the Islamic Front and a number of less known militant groups and units. In total, over 20 militant groups are involved.

The joint militant forces used at least 4 Suicide Vehicle-Borne Improvised Explosive Devices (SVBIEDs) to break the government forces’ defenses. By evening, the miltant media outlets have claimed the ‘liberation from regime’ of the 1070 Apartment project and the Al-Assad Neighborhood in western Aleppo.

Pro-government sources denied the both claims and the Russian military even claimed that the attack had been repelled. Furthermore, Russia’s President Vladimir Putin declined the general staff’s request to renew air strikes on militants outside Aleppo city. The Russian Aerospace Forces don’t provide air support to the Syrian army and its allies during the recent clashes, officially. (No official and really detalied explanation of this decision is aviable) 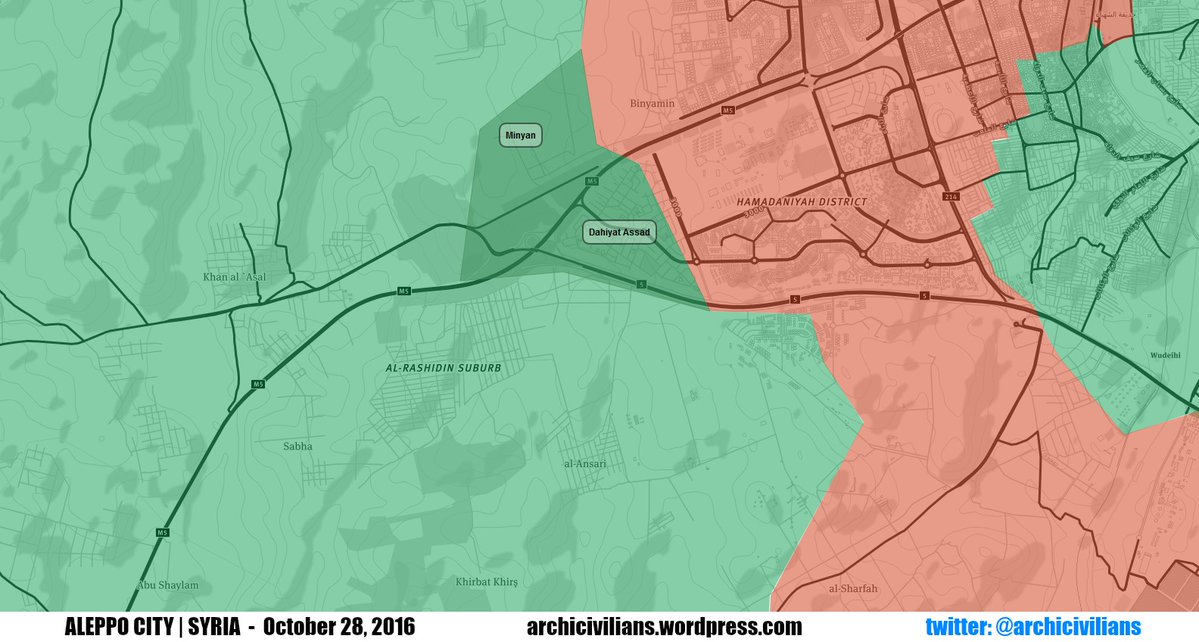 Excluding PR statements and the war propaganda, the real situation on the ground looks like:

A map of alleged plan of the militants’ offensive from the social media: 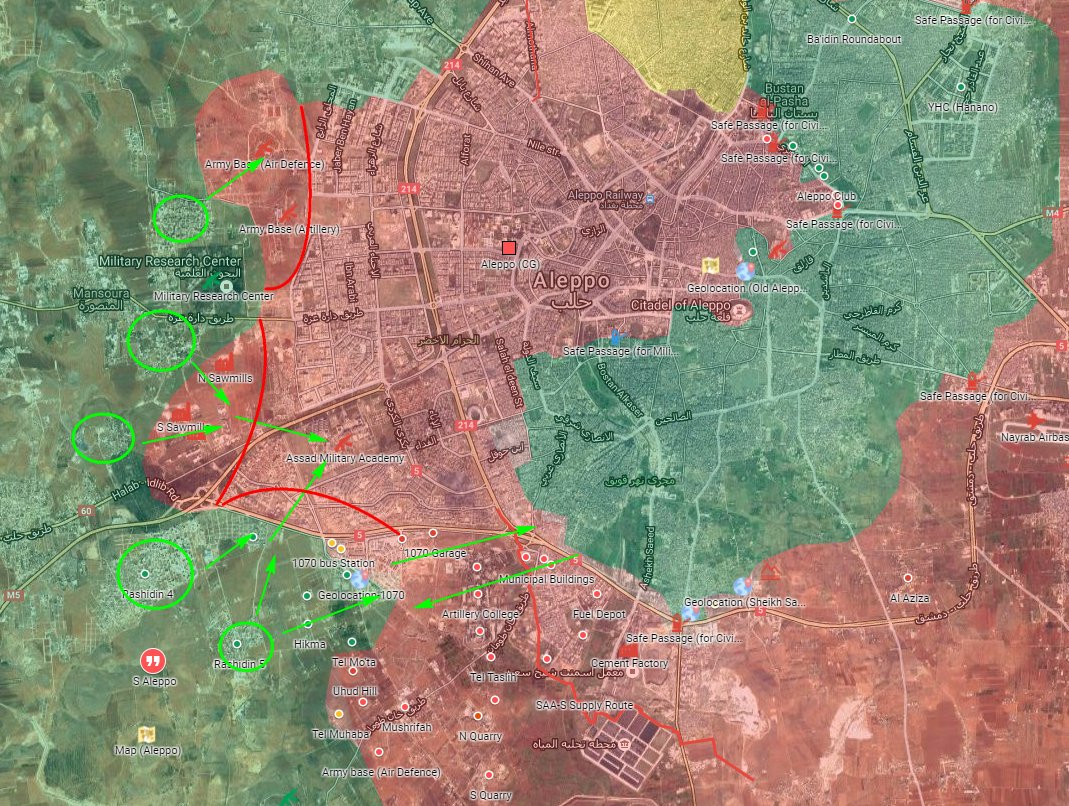 Strategically, even without the Russian Aerospace Forces, the Syrian army, Hezbolalh and other pro-government units have an advantage in the airpower and firepower. Their goal is to keep the united frontline and use this advantage, destroying the militant forces step by step.

Thank you but again, you have to be very accurate : Putin refused to resume airstrikes on eastern Aleppo only, not on southern or western Aleppo. Yourself you reported yesterday that Russian planes were bombing western Aleppo.

We provided Russia’s official attitude in the article. Yesterday, there were reports (from local sources and others) about Russian air strikes.

1) There is nothing to provide in eastern Aleppo. It’s a militant-controlled part of the city. 2) The Russian Air Force does not provide a close air support to the Syrian army clashing with terrorists in Aleppo – it’s an official attitude, now.

Hey, could you give Mr. Putin a message for me?

“Quit playing around, and end this. NOW. You make yourself look like scaredy cat of big bad crybaby obama.”

Feel free to google the Kremlin website and to do this.

It is good to get a cool headed assessment, though clearly the situation is tense and not completely clear.

What’s the situation? It’s FUBAR, though in the great halls of the Kremlin they will say simply- “Всё хорошо, прекрасная маркиза”..

Russian TAC air and Syrian are clobbering the Takfiri Kooks all over the map as they say. When the Fleet * arrives. ..Russia will get right to it ….using new designed weapons and theatre C4I operations. If Kerry cries about Aleppo. …watch him howl when Syrian Airforce with Russian air cover Rolls east and lizard plinks ISIS from Raqqa to Der Ezzor.

Russia handed over document to UN about war crimes of US coalition in Syria. Flash back attack by diplomatic way.

It’s a good assessment, but what I lack about this assessment is at least some mention of the opposing forces. otherwise it’s completely abstract… 1. So, how many pro-Syrian fighters are there? what’s the artillery support? how intense is the SyAAF air bombardment (they should be all-out). 2. How many terrorists are there? are VBIEDs expected to keep attacking (considering their ridiculously high rate of success)? 3. and why doesn’t anyone look into the fact that this time the assault force is made with a whole laundry list of small companies. how does that effect the overall performance?

lmao. Was it an attempt by the ragheads to induce the russian military to start bombing the city again, so to increase international pressure on Putin? if it’s so, then they failed at this, they failed at the offensive and they failed at convincing anybody that they are able to put up serious offensive operations. Notice how they used suicide bombers like back in august when they actually managed to attack into the city. It’s like they tried to make it appear like it was the same thing, but actually there was nothing else. If things are like this, it seems that these headchopping camelfuckers analphabets still haven’t understand they are not able to outwit anybody.