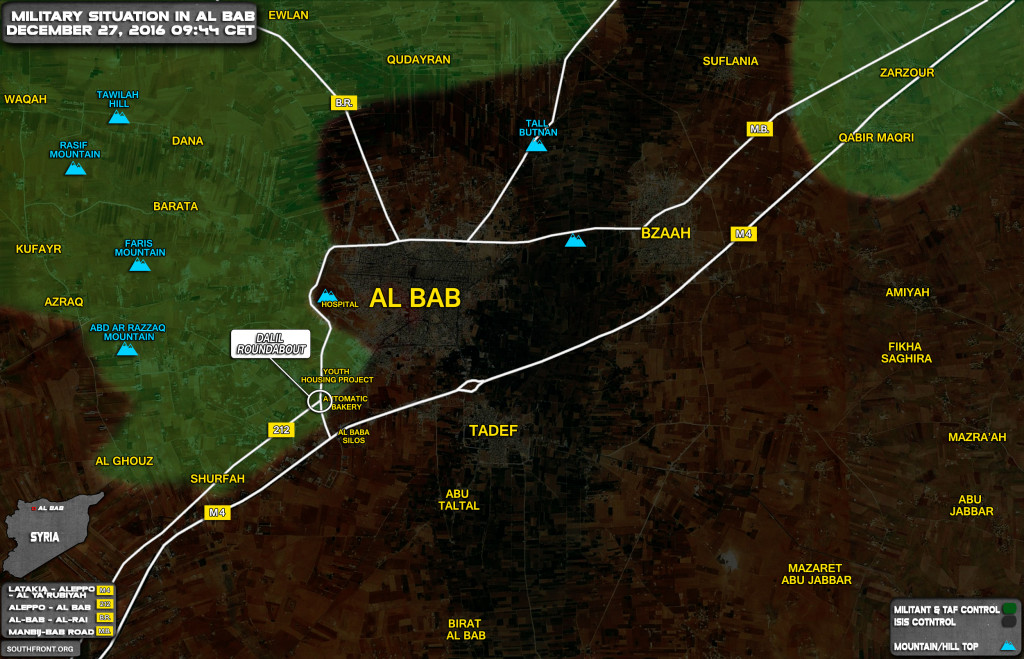 Turkish forces have failed to recapture the al-Bab hospital from ISIS terrorists in in the western outskirts of al-Bab in the Syrian province of Aleppo. However, the Turkish army and pro-Turkey militant groups are still in the control of the strategic Dalil roundabout.

This allows Turkish forces to keep pressure on ISIS units deployed in the town of al-Bab.

On Monday, Turkey asked the US-led coalition to provide support to the Turkey-led operation against ISIS in al-Bab:

“The international coalition must carry out its duties regarding aerial support to the battle we are fighting in al-Bab. Not giving the necessary support is unacceptable,” Reuters quoted President Tayyip Erdogan’s spokesman, Ibrahim Kalin, as saying.

The US-led coalition has not officially commented on the Turkish request.

At the same day, unconfirmed reports appeared that some “Russian” warplanes delivered a series of airstrikes against ISIS terrorists east of al-Bab. However, no photo or video evidence are available. 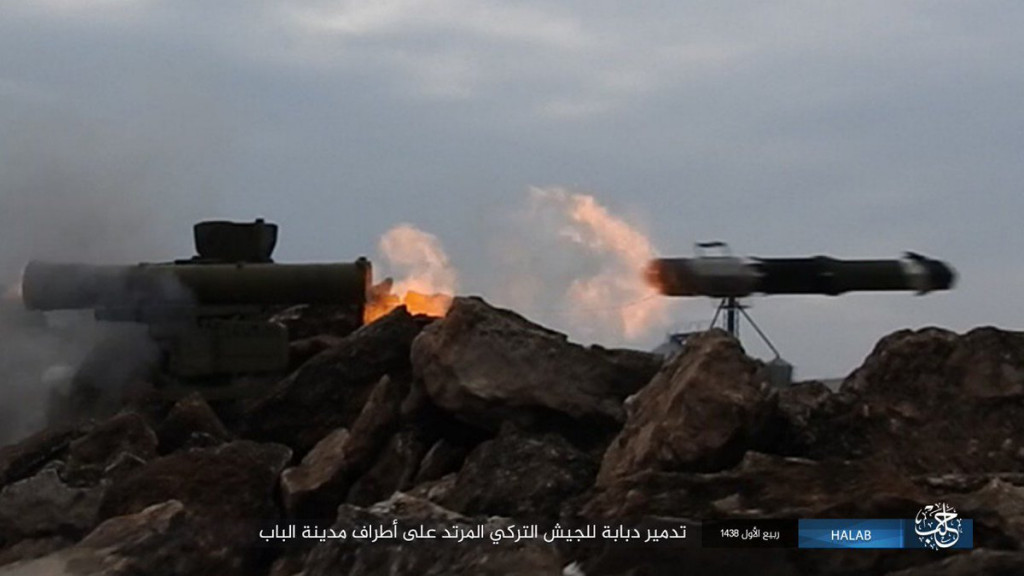 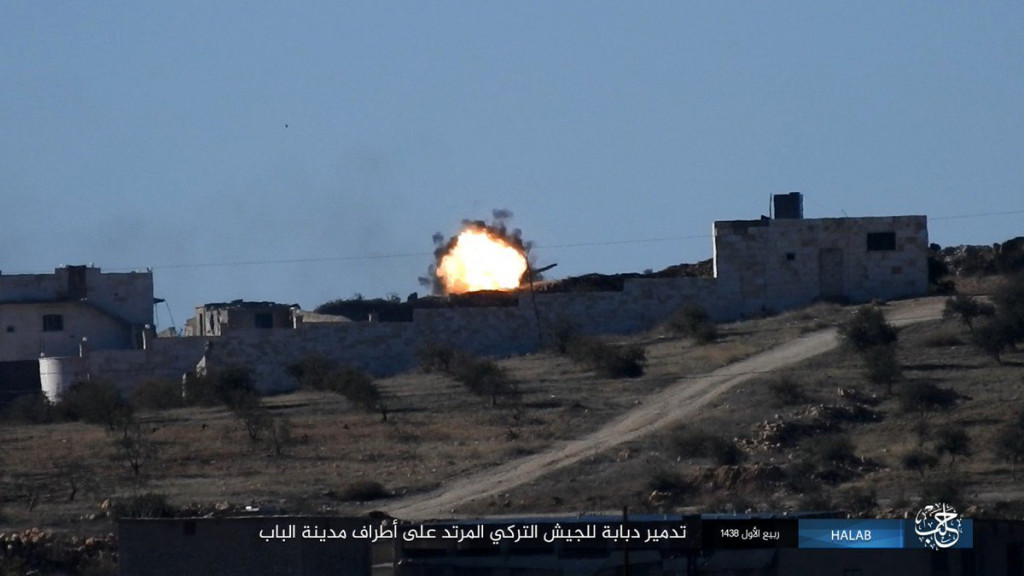 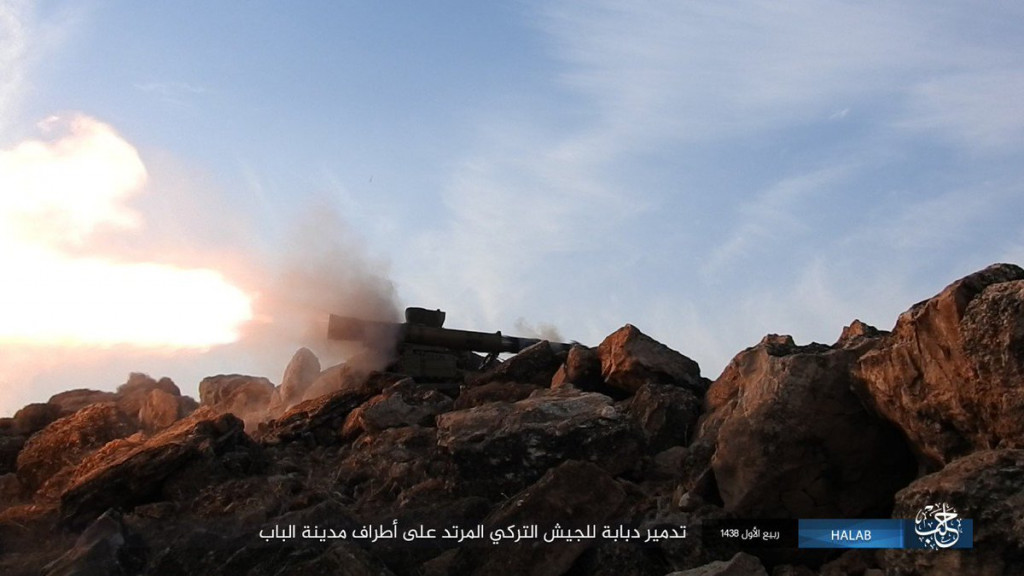 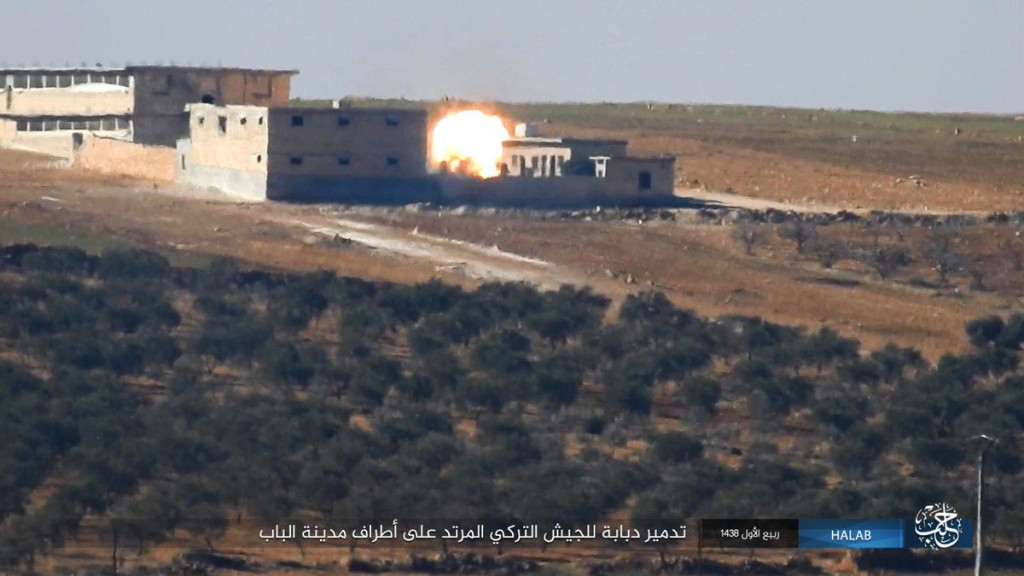 when you are invate in Syrien, you did not ask the koalition to support it. Now the isis makes you to understand the war is not counterstrike.

Why do turkey need help? They have 9th biggest army in the world and have like 5 times as many aircraft as the coalition i the area.

Because size doesn’t tell the whole story – and the mighty of the Turkish Army is a myth. The more troops Turkey will put in the battlefield the higher its losses would be. If Turkey had a strong army, there wouldn’t be a Kurd problem in Northern Syria or Northern Iraq. The fact that Turkey consider them terrorists and does nothing against them tell it all. Turkey military know its limits. And Al-Bab proves it.

US Army losed more than 4000 soldier in IRAQ and Afganistan. Is US army a myth. There is no serios clashes against ISIS without Al-Bab. ISIS send more troops to Al-Bab.

Do you know why the IDF (Isreal) forces pullback from Lubnan in 2006? ISIS use more than 20 ATGM only in Al-Bab against Turkish troops.

If Turkish weapons use against US troops what you feel? Now ISIS and PYD use US weapons against to Turkey.

Now US airforce just help to PYD. US has a different agenda more different than fight against ISIS.

Turkey can capture Al-Bab without any help. But as you know. Battle has a big price (loses and economical).

Turkey want to share the cost no more than it.

US Army lost 4000 in Iraq in 8 years and in all the country, with millions of people to control. Turkey is fighting against a town bigger as my neighborhood.

Many have been hit. But in 1 month of fighting less then in Al-BAB, that is for sure.

So what? Should they fight with ww2 rifles, so that Turkish army can have a chance to defeat them? :)

US air-force, Russia air force, Turkey air force – all are hitting on Al-Bab, that makes it even bitter for the Turks not to conquer such a small city.

They have already paid a big price and loosing their face too in the process. While PYD advanced hundreds of kilometers they have made no gains in 2 months.

Accept the reality as it is.

Could you give an example about a war in which the American army has been exposed to dozens antitank missiles and VBIED?

Air campaigns of america and russians are very limited according to turkish air force. That is important only politically.

pyd/pkk captures more village from daesh without clashes. Do you know, how many daesh did the antitank missile use against to pyd/pkk last month? There was no more serious clashes between daesh and pyd/pkk.

I like the delicious irony of ISIS using US made weapons against the Turks that passed into their hands, directly or indirectly, via those same Turks. Irony so thick you can eat it with a spoon.

Also the Turks should be careful what they wish for. The US Chair Force has a nasty habit of hitting their own forces and friends. There’s a reason why the US Army and Marines prefer to use their own assets for close air support.

What a beautiful irony! Anti-Tank weapons that Turkey has secretly filtered to Syria is now being used effectively againstTurkey. Estrogen is lurching from one disaster to the other. While Estrogen is busy trying to fragment Syria, he might unwittingly split Turkey…it’s called karma.

Can’t believe Turkey is not able to take this small city. Weak and incompetent or there for the wrong reasons.

Erdogan is tasting his own medication bias snake.Historical backstabber.

There is no terrorist around the globe only NATO EU supported terrorist initiatives.