On February 11, the Turkish Armed Forces (TAF) and the Free Syrian Army (FSA) captured the villages of Hec Iskendere and Saranjik from Kurdish YPG/YPJ forces in the Afrin area. According to the TAF, 11 Turkish soldiers were killed, 11 others were injured and a T129 ATAK attack helicopter was destroyed on February 10. Separately, pro-Kurdish sources claim that 23 FSA members were also killed and a battle tank, a bulldozer and an armoured vehicle were destroyed.

On February 12, the TAF and the FSA further advannced north and southwest of the city of Afrin. An intense fighting erupted in the area. Turkey-led forces are steadily developing momentum in Afrin but continue suffering notable casualties. 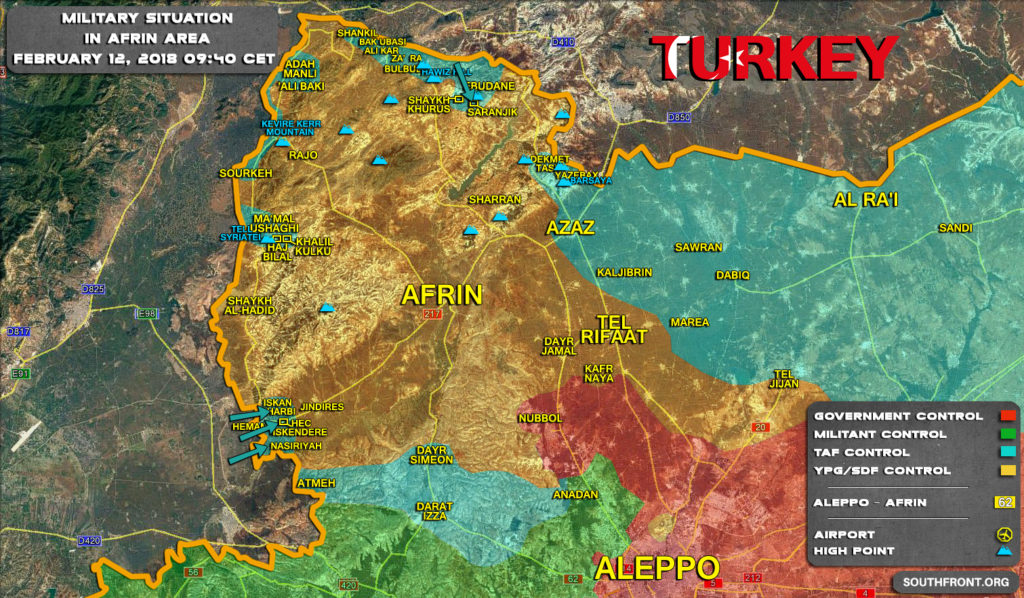 SDF forces claim several attacks repelled and have shown the Youtube movie of the sucessful attack by SDF on an Azaz headquarter, destroying the quarter, killing many, destroying stocks of ammo and several tanks there.

It remains unreported (if it happened) you claim as fact but no link, why bother posting the question unless abuse and confuse is the aim?

The link (there are more) Afarin Mamosta ‏

The intent is to give a more balanced view of the situation. Many (not all) commenters here do not have a clue about what is happening, reading only one sided info.

this is not link

Go to @afrain Mamosta, ANHA, etc etc, you will find all.

I watched the video, and the only thing it really shows there’s a big fire somewhere. Looks like a small fortified position, hardly what I think of as a base. But that could be me. Although the subtitled guy at the end also calls it a post, not a base.

Anyway, since all we get to see is a big fire and smoke the claims of total devastation and lots of troops killed and tanks destroyed seem to be as believable as the Turks saying they’ve ‘neutralized’ more then 1200+ YPG terrorists. To me it comes across as that you’re basically regurgitating YPG propaganda, which is hardly a credible source, as they have as much incentive to inflate their kills and deflate their own losses as the Turks. And its not like I’m trying to bully you or jump on the ‘we hate dutchnational’ bandwagon, because I take the many claims of Russia and the SAA that they’ve killed and smashed X number of Jihadists and their HQ’s with an equal grain of salt. I like it to be true, just as much as you probably like the YPG claims to be true, but I assume its propaganda. And therefore to be taken with a grain of salt.

Correct BP. SF cannot post every YPG tweet as fact. I pointed out it is very difficult to verify latest claims, no sighting of any tanks in small area

i just want to point out that its impossible for turkey to deflate its casualty count bc the NATO soldiers family needs to be notified and buried. whereas the pkk child soldiers or regulars most dont have ids

Agree with your post re honest reporting. This is not a Military Base but a Military outpost / fortified position ( raised dirt walls (bund) ) some call them Keeps. Takes a couple of hours to make and it wasn’t totally destroyed. 5 mins to make operational again. Was it occupied during the Attack ?? looks more like someone went into it when it was unoccupied and set fire too to whatever was there or was it a lucky mortar shot on the ammo. ?? To call it a Base is a big stretch but it does look like a successful attack on an outpost but of little overall significance. No bodies and it doesn’t look like anyone was harmed in the making of this video.

ps thanks to dutchnational for finally get the link up for an alternative view.I am a big boy and can look at both sides without risk of infection.

What is that?! Learn how to copy and paste a url address as a link.

As in the article title “claim” but no tanks or confirmation of KIA. PYG arial shot actually shows no tanks in area of fire although secondary very small explosions are seen of maybe mortar rounds exploding but appears it is fuel tank hit. https://www.almasdarnews.com/article/kurdish-forces-claim-4-turkish-tanks-destroyed-northern-aleppo/

Why asking the same question Dutch; I’ve patiently explained to you the nature of the modern ‘internet medias,’ their embargo on real news from real reporters, and the dissimulative efforts they pursue to hide the truth. Like the story of the dead Wagner Russian mercs I’ve reported on lately; were they dead American ‘contractors’ it would be front page news – around the world!

You don’t have to click on my avatar and see where to go for real coverage “from the ‘muddled east'” … instead of ‘about the muddled east’. But you DO have to stop whining about not finding what you’re looking for in all the wrong places pal!

What I am trying to do is bring a little bit of balance here, drawing attention to the often partial reporting here. If that’s whining, too bad.

As you wish Mein Herr! But no, it’s not “bringing balance” to a stacked deck.

It’s called ’tilting at windmills’ – I thought it was something practiced by fictional Castilian knights… but I suppose the Dutch might have caught the disease, what with that interlude of Spanish Netherlands and all!

Nothing is going to change the fake news medias. Certainly not ‘real news.’

do you have A link? its so hard to find any footage from Syria combat now..

It appears by either design or default that a pincer and pocket is being formed by the Turkey borders and a southwest movement up through Afrin and Azaz from which there will be no escape which brings into the question why Kurd reinforcements were allowed in from the East Kurdish areas. Killing field or containment from borders with Iraq and Turkey. It is hard to determine from the outside looking in and distinguishing the levels of war (doctrinal perspectives that clarify the links between strategic objectives and tactical actions). Although there are no finite limits or boundaries between them, the three levels are strategic, operational and tactical.

Those pincers have to advance big time though in order to meet. Which at the current pace will take forever. Maybe if the Turks actually had a decent army they could have pulled it off. But with their current shambolic army it’s probably too much to pull it off. Gently but slowly push the Kurds out of Afrin seems to be the best the Turks can hope for.

Good morning Barba_Papa, your idea of “advancing fastly” has died during world war 1, where in a single offensive casulties were around 30.000 to 50.000 thanks to machine guns and mind filled fields.

Next time, do not embrass yourself by uttering BS.

True for wwi but if you take a look at Syria ….SAA has made huge gains at many occasions due to the collapse of terrorist defences

It took 5 years for SAA to free Aleppo, which, at one point, was revealed that Turkey traded Aleppo with Al-Bab, thus it was evacuated after becoming a pocket.

Aleppo would last another 4 years if it wasn’t Turkey’s deal with Russia because it is even more densely populated than Eastern Ghouta.

so whats your opinion (thoughts) about Turkish operations ?They are going as planned etc?

I don’t know? But any sane person with a knowledge of what an operation is and what its parameters are to be a succesful one, knows or predicts Olive Branch will last at least 6 to 7 months.

i expected it to be a fast operation…..but i didnt consider the courage of the Kurds and their battle spirit, contrary to the luck of both by Turkish merchaneries

the intensity of battle is way past ww2 in Syria. every other superpower wants to test their new deadly toy weapons

Id say the slow advance has multiple factors – Barba_Papa’s points are valid, but I think in a scenario where any loss (of life or equipment) is seen as an embarrassment/propaganda coup for the other side – and the enemy is armed to the teeth with modern shit to do it with – ego is probably a big factor too.

Russians are probably 24 chess moves ahead of this little game.

If one goes to any news source dealing with ME happenings, before you start surfing you fill your salt shaker, your gonna need it. I keep tabs on Official US procurement contract bid site, but even there you eed the salt, because it is just the tip of iceberg. There is o accounting for US foreign weapons purchaces. Who knows if the hundreds of millions budget for Green Zone Iraq is realy for steak, eggs, chefs and beautitians wages, and not for recruiting Lebanese, Kurd, Somali or Jordanian unemployed to move to Afghan ISIL group. You read all, and find little, and from the little , you gain but a fraction of reality. In truth how many are killed, who gives or takes matters little, to we outside, we are not dodging or sending bullets. BIAS sure, most of us pack our bias in responses, some such as myself, may now and then pepper with facts, and from many responders we gleam our opinions