According to pro-government sources, the SAA and the NDF have liberated Atshanah Sharqi in southern Aleppo, Humaymat in eastern Idlib and Abu Hariq, Anij Bagra and Totah Hjaila in northeastern Hama. Government forces have also repelled counter-attacks of Hayat Tahrir al-Sham on Abu al-Duhur and the Abu al-Duhur airbase. 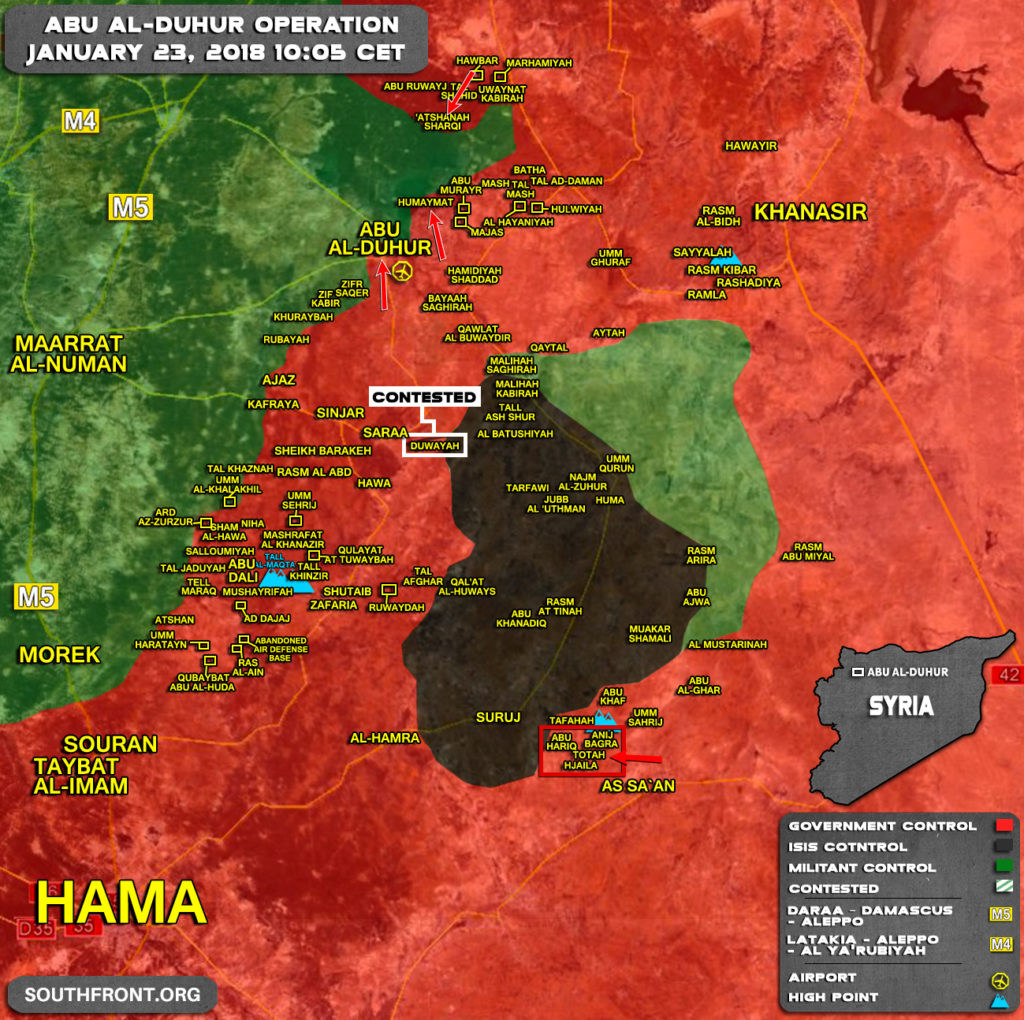 last weeks the black area in whole yria was growing. there are still 5 isis regions. :( but the myotropic putin does not see isis anymore in syria.

If it wasn’t for Russia then Isis still would roll with 1000s of oil tankers between Deir Ez Zor / Raqqa and Turkey, making big business. Tell us Mr Krupacek, who has done something about it?? The US? UK? or your friends from Holland maybe (dutchnational and Syria Insider)?? We all know you are a notorious Putin hater. Who would you rather be in power, the alcoholic Jeltzin?? Do you really think those Russian Oligarchs are Putins product? I’d rather Russian Oligarch money influences politics than Rothschild predatory capitalists. Have you ever been to Manhatten? Go there and think about where our money goes and how much blood it is built on. Russian oligarchs are tiny fish in comparison. At least Putin has got a brain, Trump is a narcissistic psychopath who acts like an 8 yo boy.

Solomon is just trolling for the lulz. Be easy on him, at least he’s funny. And the thing about funny is that sometimes it hits home because its true. I’d say that Putin and Assad indeed no longer have much eye for ISIS. Or deem it much of a threat anymore. Thankfully ISIS only seems to expand into Green Daesh territory these days, but its continued existence is an oversight that should be addressed.

Black and green areas are quite the same.

Think they are further west towards Mukkar Shammali , Abu Ajwa and Rasm arrira, might be further north around Suruj , but some times maps get the information too late to add it in.

Please see the last art of my comment to slowloman.

Speaking of oil trucks and the oil fields east of deir ezzor, where are these trucks transporting oil to now?

Myopia is the medical term you seek (referring to eyesight limits) as myotrophy refers to the nutritional status of the muscular tissue, in Putin’s case, this is certainly better vis a vis the orange-haired and mentally stable self-declared super-genius.

Oh solomon,dont worry you will soon be back to eating your words as per usual! We all know your a bit “confused” soon all be back to normal,mrs putin and assad will be sure to put things back on an even keel! Also,dont you think that the fact that isis is distracting hts with its mischief is maybe HELPING the SAA? Just a thought.

Turn thot pocket in to a hot pocket by torching it.

Like I said this pocket has never been really left alone but slowly enclosed all the time securing all gains. 1200-1500 was my estimated number guess what Russia’s and Syria’s number is 1500. This is where you don’t want any of the little piglets escaping from so wait and watch they aren’t going anywhere, then strike.