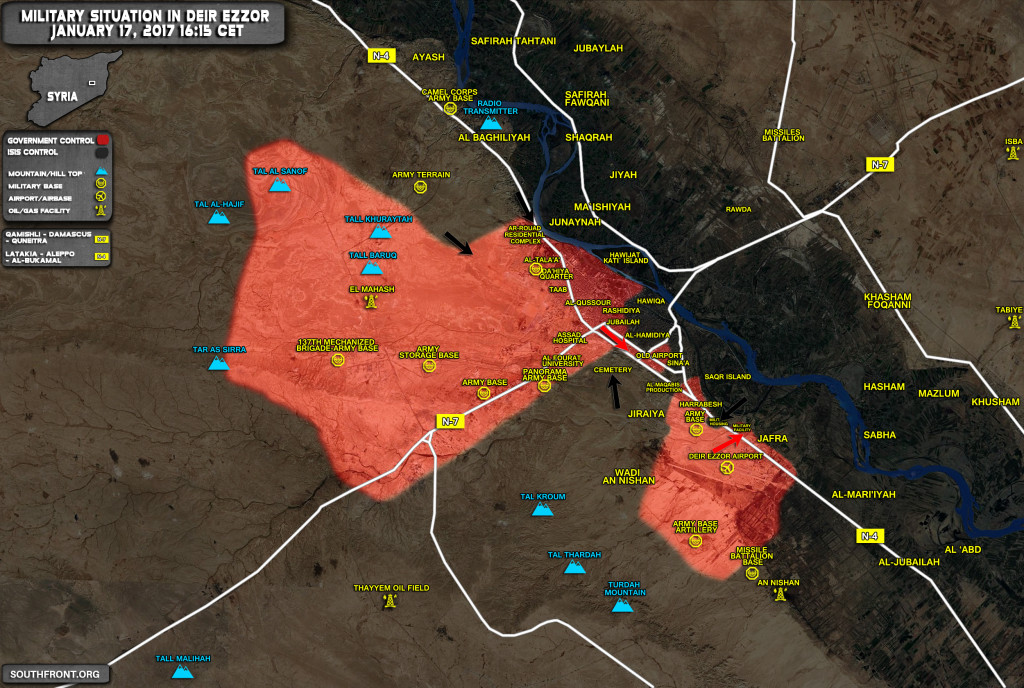 Heay clashes are ongoing in the areas of Cemetry, Al Fourat University, Al-Maqabis Production and Jiraiya in the Syrian city of Deir Ezzor as ISIS terrorists have been attempting to develop a momentum gained earleir this week.

Cotrolling al-Assad Hospital and Al Fourat University, government forces still have some chances to link up the Deir Ezzor Airport with the rest of the government-held pocket. However, it will not be an easy task.

ISIS had deployed a singificant number of troops (some sources note that these were elite units redeployed from Raqqah and Mosul), military equipment and artillery pieces. Army positions are under a constant artillery fire.

The military situation in Deir Ezzor is now very complicated for the Syrian army even despite an air support by Syrian and Russian warplanes.

The army’s goal is to push ISIS militants from the road linking up the Deir Ezzor Airport and Al-Assad Hospital. In turn, ISIS seeks to develop the gained momentum and to gain more ground in the same area. If ISIS achieves a success in this, the group will be able to focus on storming the airport.

what are the sources that the airport was cut away from the rest of Deir Ezzor? isn’t just AMAQ right?

Seems to be a very difficult situation. Hopefully the city won´t fall like Palmyra. This advance totally fits to the US plan to limit any influence of the Syrian government in the Eastern part of the country. Some of the strategic decisions that have been taken in the past and contributed to the current escalation seem to have been highly questionable. In fact, there would have been enough time to reenforce and connect Palmyra with Deir Ezzor and the surrounding areas to limit the influence of the IS in this particular area of Syria. At the same time, government forces are taking their time to negotiate and liberate some of the smaller pockets near Damascus that should have also been liberated months ago. I just hope the troops in Deir Ezzor will hold on and somehow reverse the situation soon.

Did you forget about Aleppo? The most important battle of the war?

it’s time Russia uses these once again https://en.wikipedia.org/wiki/PFM-1 well placed/dropped it will stop any advance

I’d like to see the Russians take it in a different direction and use their upgraded 500lb gravity bombs with a proximity fuse that blows up above the ground and shows down on the troops (don’t have model number).

The problem with the fancy landmines is that the SAA is going to retake the ground so it’s not a good fit.

The problem with big boobs , is that area is ” big oil” all along the river especially south ( where ISIS is) is major oil wells and pipelines . The jihadists are all over the money , and that area is all money . It should be Syria’s money . Beat those barbarians , reclaim the wealth that is yours . Putin ; don’t forget you have a legal and reasonable reason to be in Syria . And you are there , don’t be half there . My respects , and best wishes .

exactly, time to try out some new weapon systems! Even if infrastructure is severely damaged, it´s still a better option than just retreating.

Hey Russia, I know you want the SAA to fight for themselves but don’t you need at least ONE live fire drill for one of your paratroop divisions, just once?

Will a rendition of ‘The Sacred War’ stir up something primal in the Russians when you crushed the Hiltlerites?

Land one paratroop division a little south of Deir Ezzor and then drive ISIS into the Euphrates with your tanks (Russian paratroops divisions are heavily equipped). The bridges across the Euphrates have been blown up, ISIS would have their backs against it.

Why it is allways Russia that have to do the dirty work, when is allways Iran that do the big talk and bragging. I alwayss see Iran bragging and doing big Talk, but i never see Iranian Tanks or infantry in the wars they “participate”???

Something has to be done right now. Assad must immediatel sent reenforcements and start to put pressure on ISIS from the direction of the Tyas airbase. This means that it is necessary to clear the road and the surrounding areas between Deir Ezzor, Palmyra and the Tyas base. Priorities must be shifted from other battle grounds to this particular area. In addition, Russia should sent Speznas and other elite troops to the area. Why on earth not, what speaks against it? since the USA and Turkey also use specialized ground forces in the country. As soon as the situation stabalizes, these fast-response teams could be used on other battlefields. Moreover, Russia should now use some of the really BIG explosive devices to clear terrorist-infested areas in a faster pace.

As far as right now, SAA does not have ability to blitz up the road to Deir Ezzor. Even if they tried their salient and supply line would be hit by ISUS on their flanks (just like before). It is up to Deir Ezzor forces to hold on and link up with airfield. They can do it if backed up by large air support (airstrikes and resupply). Russian air spotters may be there now.

In theory, reenforcements should be availible after the liberation of Aleppo. Nevertheless, it seems that government troops have focused their recent efforts on other sectors such the Wadi Barada area. Hopefully heavy airstrikes will do the job. If not, this will be an enormous humanitarian catastrophy. Being cut off the airfield for a prolonged time would imply a slow downfall, no matter how experienced the troops there are. I guess the ISIS troops are fairly numerous compared to the defenders of the city. In the end, the current events have been quite predictable and something should have been done before the fall of Palmyra (which is not only a military defeat but a huge PR blow in the war of information). Losing Deir Ezzor is unthinkable.

Since retreat is no valid option in this particular scenario, it must be a major priority to prevent the fall of the city at all costs. Strategically, Deir Ezzor as one of the last isolated government strongholds in the Eastern area of the country and must not fall into the hands of terrorists. I sencerely hope government forces and their allies will be able to stabalize the situation soon. There is no other option, since the fall of the city would be a major desaster for a variety of humanitarian and strategical reasons.

Where is Iran in all this. Iran talk big, very big talk, but Iran never appears to put their soldiers were their propaganda is shown. Where is Iran and their big army, since they talk a lot….. Iran shoud be the first one to commit troops to the ground in these battles.

why iran??? where are syrian citizens, ha?! not foreign people should die for syrian cowards.

in deir ez zor there are 100 000 civilians. recruit 10 000, giv them kalshnikov and grenades and will be enogh manpower to halt isis.

It´s a bloody mess of a proxy war where neither side seems to be willing to invest what it takes to end the conflict as soon as possible. Realistically speaking, Iran could not provide more support than it already does. A full blown Iranian intervention in Syria (including ground troops) would most likely provoke a further escalation of the already tense situation and doesn´t correspond to Russia´s geostrategical interests. And jes, I have also asked myself why Assad is not able to mobilize greater proportions of the population in the right age for military service. On the other hand I have seen quite a few videos of youngsters from Damascus celebrating pool parties. Since I am not an expert as far as the political situation in this particular region is concerned, I don´t have a definite answer for some of the urgent questions that still remain unanswered. Above all, I am wondering how Assad could possibly reverse the lack of legitimacy of his government in a post-war scenario. Thereby, it is striking that significant proportions of the Syrian population have either cooperated with terrorist groups or consciously objected to military service. At the same time, I see that so-called “reconciliation” has adopted a laissez-faire approach that allows militants to simply return to their normal civil life as long as they are no foreign agents (or even integrate into the national armed forces). I am curious to see how all this will end. Hopefully Assad´s forces manage to pull off a devastating counter-attack. However, I am not sure if the government has learned its lesson from past errors and holds a suitable plan to transform Syria politically, culturally and economically in the (possible) aftermath of the war, so that terrorism will never ever threaten the soveereignty of the Syrian state again. For now, the government must shift reserve forces from other areas to Deir Ezzor and reopen the highway that connects the city with Palmyra. The offensive must come from the direction of the Tyas airbase. For example, parts of the forces who are currently engaged in liberating smaller pockets should be immediately transfered to Deir Ezzor. In addition, I would sencerely appreciate to see some of the big (non-nuclear) explosive devices tested in practice in order to convert the ISIS held areas into authentic graveyards for the Takfiri. Russia claims to be a pioneer in the development of these fancy weapon systems that cause similar destruction to small nukes (without the ecological consequences). However, few of these “mothers of all bombs” have been used in Syria so far (maybe because they are too expensive?). As far as the infrastructure is concerned, I sencerely believe it doesn´t matter if parts of it get destroyed at this stage of the conflict.

phuuh, long for me. later will read and answer :)

Where is Iran in all this war. I always see Iranian genrals and politicians talking Big, talking about protection their allies, but i don´t see Iranian army anywhere in Syria. Where is Iran in Deir Ezzor or Iranian tanks in Palmira. Where are Iranian Tanks???

Iran has lost over 1,000 soldiers in Syria. In addition to having the IRGC there, mostly in the Aleppo province, they are paying Shiites from Afghanistan and Iraq to fight in Syria.

Russia has given Syria desperately needed military and humanitarian assistance in the defense of Deir ez-Zour, now Russia cannot let this city fall to the terrorists. Time to deploy ground forces in strength (airlanded/airborne) before the jihadists begin their slaughter and the external enemies intervene to creat their “Sunnistan “. Situation critical, this attack has been well planned, organized, and supported by US and Saudi supplied fighters and weaponery. It must be defeated by any means.