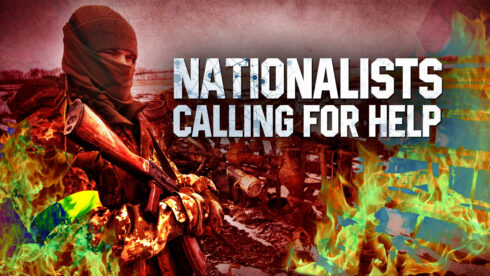 Intense Russian strikes across Ukraine continue. Russia is constantly pounding the military facilities of the AFU (Armed Forces of Ukraine) and strategically important facilities used for military supplies of the AFU grouping in the Donbas region.

Recently, Russia has been carrying out a number of strikes against key and strategically important AFU positions. The strikes have targeted warehouses, railways and bridges. The Russian Federation is staking on the strategic aspect, which could serve as a catalyst for military successes of the Russian Federation on several fronts.

These were the largest strikes since the start of the Russia’s special operation. Ukrainian air defense systems were very active. Lviv is armed with S-300 missile systems, although there are not many of them left. Ukrainian air defenses are intensely defending weapons depots, which could mean that some important cargo is stored there.

After a series of shelling on the depots, the Russian Armed Forces once again carried out a series of strikes, targeting the military base in Yavrov in the Lviv region. According to unconfirmed information, a warehouse with NATO weapons was destroyed in the area.

The Yavrov base was used for accommodation of foreign militants. LINK

On May 17, the Russian cruise missile hit the railway infrastructure in the Lviv region.

On the night of May 17, Russian strikes on military facilities of the AFU in the Kharkiv and Sumy regions intensified. Russian air defenses also shot down one helicopter and two warplanes in the Kharkiv Region.

In the Chernihiv region, Russian aviation struck the Desna training center of the Ukrainian Army.  The missile strike hit the barracks of the military base. The regional administration of Chernihiv confirmed the information about the killed and wounded Ukrainian servicemen. 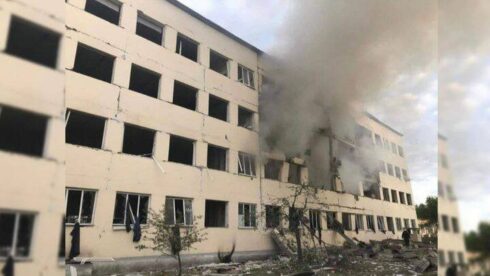 On the same day, the Russian Armed Forces struck the town of Akhtyrka in the Sumy Region. A total of about eight strikes were carried out.

Despite the Kiev’s claims that only civilian facilities were hit, the analysis of the footage from the spot revealed that the target was the training ground of the 91st regiment of the National Guard of Ukraine.

One warehouse and four barracks were destroyed. This was the second strike on the territory of the military facility since the beginning of the Russia’s military operations in Ukraine.

In the Donetsk and Luhansk People’s Republics, the Russian Aerospace Forces are constantly shelling the AFU military positions. 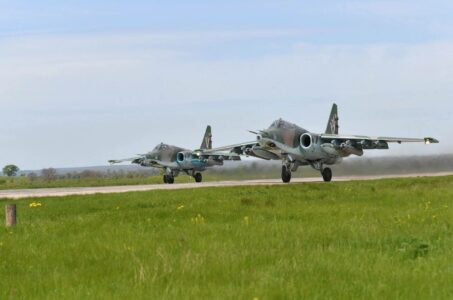 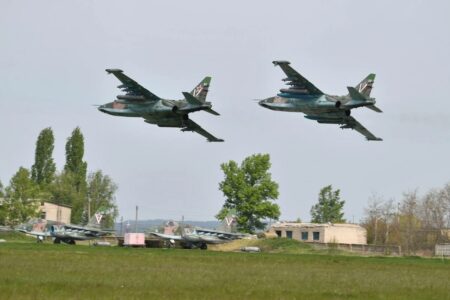 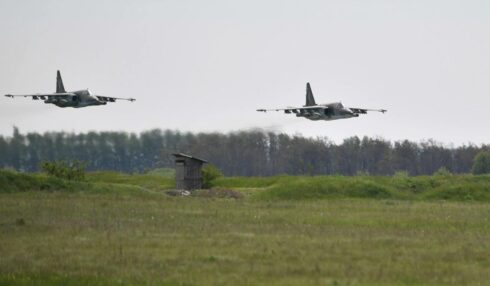 The Russian Defense Ministry published a review of its «Orlan-10» UAVs in action. The drones perform reconnaissance flights, adjust fire for Russian artillery and carry out pinpoint strikes on the AFU positions.

The AFU assumed that the number of Russian forces will increase in the Black Sea in the future. Amid the Russian threat, the AFU decided to strengthen the grouping in the Odessa region. As a result, military facilities in the region are targeted on a regular basis.

On May 16, there were a series of strikes on the outskirts of Odessa by Russian forces. The Ukrainian media reported that the strikes hit a recreation center located in Odessa. As a result, three people were injured. Russian warplanes were reportedly used in this attack. The head of the Odesa Military District, Maxim Marchenko, said that the strike destroyed the recreation center and a private house.

The former recreation center turned out to be a military base used for accommodation of fighters. 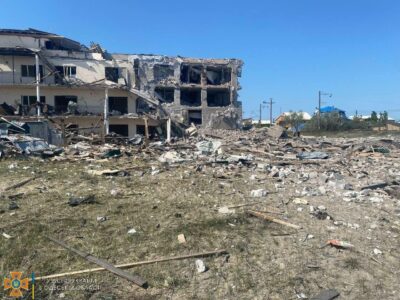 On May 18, the Russian Armed Forces struck once again a bridge over the Dniester estuary in the Odessa region. LINK

Only theRussians strikes and strikes. Thats all they can.

Propagnada is both ways. Did Russia bombarde internal refugees in that training facility or is Zelensky correct. Those refugees has to be somewhere.

who does one believe, Zelensky or Putin? What a difficult question that is! British sarcasm. Who thinks Putin would prefer to attack refugees to militqary targets?

Zelensky fires on refugees and then blames Putin.

According to former pres. Poroshenko “That’s how we’ll win this war.”

Refuges are in your house fucking your monkey family while Zelensky striking and striking your butt. Thats all he can.

rato tv said that they are in your anus !!!?

In India idiots like you are called Chutiyas, and rightly so.

What does it mean, Chutiya?

What do you reckon? “Ghost of Kiev”, anyone? Bucha? Just asking.

Yes, they are in Poland and spread out throughout the EU though the US won’t accept many because they are white. So yes, Zelensky is lying once again.

ukronazi crying and whinning like the pedobastard he is! whaa whaaaa whaaaa

And the Russian bolsjeviks are stealing food in Ukraine, what a low life creatures.

It’s actually the West that’s doing that. Taking the wheat

I think we all believe me Putin the world does also

Russians have plenty of spies in Ukraine, they know exactly where are ukro-terrorist training centers and weapons depots.

Indian Chief of Staff gave a very upbeat assessment of Russian Operations and said that Russia is grinding the battered Ukrainian puppet military and has all the time in the world to do it. NATO has wasted a lot of money but failed. Ukraine should sue for peace or will be totally destroyed and the western criminals will walk away leaving it in shambles.

Absolutely they do. That’s probably what phase 1 was all about. Take some guy from DPR or LPR who lost his family a couple of years ago because of Ukrainian shelling and slip them all in to position during the Chaos of the first week when Ukraine was collapsing and Zelensky was trying to evacuate with the other oligarchs.

I’d bet plenty of their spies are disaffected Ukrainians that are doing it because they hate their government. Who can blame them?

Well why don’t they take some action instead of just picking at them?

Only gonna ramp up from here. Odessa region next. All the way to Transnistria.

One of this days, phone to Kadirov.

With all the fighting in the Donbass & the south, and the current personnel in Ukraine, they have the capacities to siege and storm one big city at a time. Mariupol has just fallen, so is it going to be Mykolaiv or Odessa next?

Forces in Kharkov are to cut off AFU entrenched in the Severodonetsk.

Those fortifications in the LPR & DPR are a problem. Especially at the outskirts of Donetsk. Is the airport even safe & operational?

They don’t need it, the South is what they want.

On May 18, a Russian kamikaze drone “Cube” attacked an American 155-mm M777 howitzer during the fighting near the village of Podgornoye, Donetsk region. As a result of the actions of the UAV, the combat crews of several guns were hit a according Russian forces.

Shlomo, one of these days Golias, the Filistin, is going to take care of you.

you are humiliated—desperate nazi moron

So, let us talk about facts. How much sq/km did Russia conquer? How many soldiers died sofar? Answer to the first question: not much to talk about. Second question: twice as much as in Afghanistan. What does one conclude?

More than 4 times the size of England. And they are attacking into fortified areas, which is of course difficult. And they avoid civilian casualties.

But they are doing extremely well. Try to take that area back from them – only then you (and other stupid NATO suckers) will realize what they have achieved.

It seems you use the Hohols as you data source. I’d careful in doing that. Gost of Kiev, rings a bell?

The latest military overview is that the Russian army is refusing to obey orders from the Putin cockroaches. They even opened a prison camp just to imprison all the deserters. They want to be sent back to doing the fake military exercises like they were told, not a special moronic operation to defend the People’s Republic of Lunga Lunga in Dombass.

Did you see those fighter jets how low to the ground they’re flying, dam! Try doing that with an F35 and the fat ass of the fighter jet will drag on the ground and soon after just crash. Russia has not even used any of their advanced fighter jets yet. You know why? Because they don’t need to, this is a Special Military Operation not a full out war. NATO is watching in disbelief seeing Russia completely demilitarize its biggest armed force in all of Europe with ease and minimal casualties while preserving most of their most advanced tanks, jets etc.

Muhammad your Prophet
Reply to  7even-N-6

They don’t need to since they’re already fucked. If they had their most advanced jets ready to fly they would’ve used them already like they did with the crappy supersonic missiles. They’re all destroyed by now. Sorry if you can’t accept reality. But that’s your problem, not mine.

Those sling shot drones are so dam tactical. Russia’s military is extremely mobile. NATO drones on the other hand have proven to be ineffective against a professional army.

THE NEXT SLOW EPIC FAILURE BY PAPER BEAR RUSSIA COMING UP. Imagine this shir equipment and LARPing against a REAL NATO ARMY. Fuck off pootin

Real NATO Army, lol..NATO transgender forces would be decimated even before those biological men prepare for battle (put a make up on their faces and shave their legs).

this exceeds the wildest dreams of hitler and goering, a million strong ukrainian army is hunting for russians in kharkiv…

Lol 😆 those refugees? Troll go back to your masters. The Ukronazis and handlers about death of civilians and example, Afghanistan, Syria, Yemen, Iraq, Lybia, Serbia, Vietnam, Korea. Just to name a few.

tortures and murders by SBU… a french true journalist

Say what you want about Russian ground tactics, but Russian precision missiles have been nothing short of amazing. Just remember anyone of those long range missiles can carry a nuclear warhead, enough to take out an entire city and there is NOTHING that can be done about it.

Do the bridges, roads, railways and cut the power. This doesn’t need to take forever, just use common sense for a change. You don’t have to kill people just make them uncomfortable and unable to get supplies of weapons and food.

One sunny day and the boys get excited.

Every day in rump Ukropland fewer USeful idiots to die for the collapsing angloZionaZi empire of shit. Be nice to Bears and they will be nice to you. If you imagine that you can poke and taunt a Bear then you will lose limbs and indeed life itself that should be obvious to the Natostanners by now. No more games!

Onward to Odessa, that other Russian city bequeathed to Mother Russia by Catherine the Great.

Putins army is killing defensless children and mothers and old people in Ukrain. Expansion of NATO is Putins myth, of course all countries is seeking protection from a completely insane tyrannical leader in Russia as usually the latest 200 years. Russia must be demilitarized and deputinized asap.