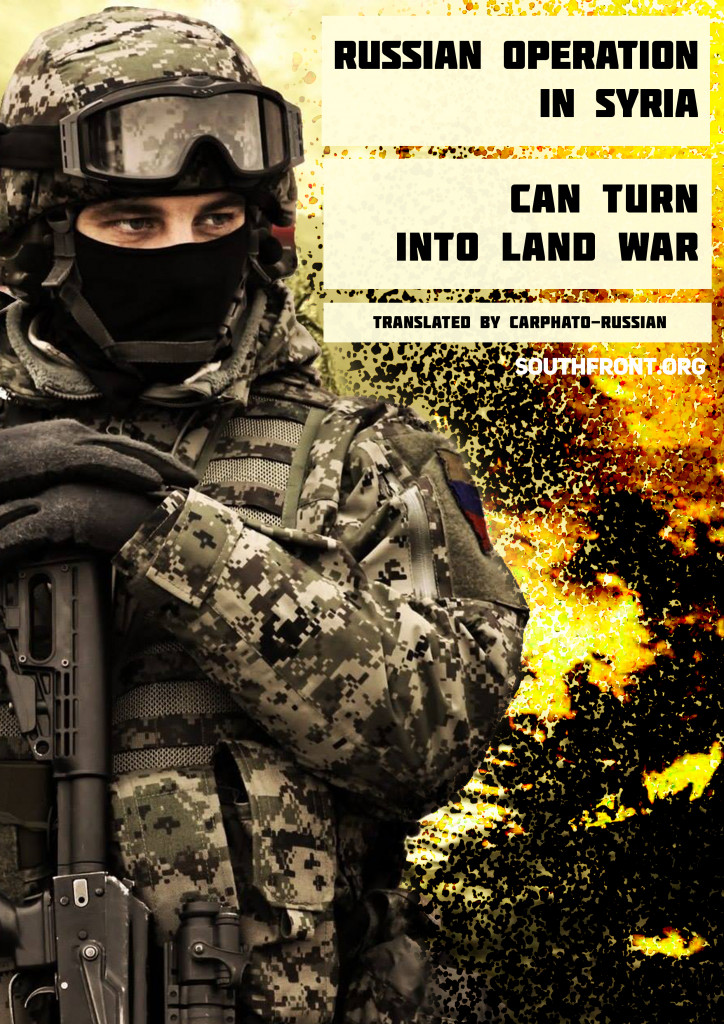 Originally appeared at MK, translated by Carpatho-Russian exclusively for SouthFront

Evgeny Satanovskiy, president of the Institute of the Middle East:

”It is obvious that now Russian pilots will actually execute flights, but on the ground Syrians, Iranians, Shiites from Lebanon, and Iraq will fight on the ground… No way we should stick our nose in land operations, regarding which Sergey Ivanov (Chief of Presidential Administration – “MK” ) also spoke.

“Russian leadership is very specific: it has experience and the deepest caution — look at Putin’s activities in the Chechen war, in the Crimea, anywhere. As the Commander-in-chief, our President conducts himself extremely constructively. If we look at Obama, or Hollande, or Sarkozy in the case of Libya, there it is a question of engaging in reckless schemes. Regarding fears that participation in the war in Syria can become a reckless scheme also for Russia, I strongly doubt it. And looking, for example, at Shoigu, I do not believe that he is an adventurist — Sergey Kuzhugetovich is able as well as anyone to consider place, time, and forces. I look at Putin and I understand: it is probably good that he is our President and not Medvedev”.

Fasikh Baderkhan, Senior Research Associate of the Institute of Oriental Studies of the Russian Academy of Sciences:

“I do not think that the Russian troops will go into Syria in major scales. First of all, for the reason which the head of the Ministry of Foreign Affairs of Russia Sergey Lavrov already voiced, that the region does not need people for the fight against terrorism, it needs technology. The technology is being delivered to Syria.

“Besides, the conflict in Syria does not demand the active armed forces, this is a special type of war where special detachments are needed who must be able to discover and destroy terrorists in settlements. Therefore, until the situation essentially changes in the region, I exclude the possibility of mass dispatch of a Russian military contingent to Syria”.

Ruslan Pukhov, manager of the Center for Analysis of Strategy and Technologies, member of the General Council at the Ministry of Defense of the Russian Federation:

“I think that political experts and the Ministry of Foreign Affairs, as also during the time of the Soviet presence in Afghanistan, will insist that armies be as small as possible, a “limited contingent”, so as not to irritate our Arab and Turkish partners.

“Military leaders or, for example, I as an expert engaged in these issues, would probably prefer that troops be as much as possible. This is bound to two factors.

“Despite the fact that we are not going to fight on the ground, Islamists will not question our resolution. And if there will be an attack on a base? And if there is, theoretically speaking, a platoon or a protection battalion. Roughly speaking, the fact that we wish to be restricted to aerial operation cannot save us from a ground operation. And one must be prepared.

“In addition, Americans, Turks, and Israelis are dissatisfied with our planes in Syria. And, if we do not have a sufficiently strong air defense system there for electronic warfare, at some specific point there might be attacks by some “unknown” planes on this base. And all must understand that in the case of an attack on the base, it will be protected. I do not know what solution will finally be adopted. I am generally against the introduction of troops, but if the decision is made, then let there be more”.