This article originally appeared at Wsws.org

US Defense Secretary Ashton Carter is meeting today at the headquarters of the US European Command in Stuttgart, Germany with two dozen US military commanders and European diplomats to discuss how to escalate their economic and military campaign against Russia. They will assess the impact of current economic sanctions, as well as NATO’s strategy of exploiting the crisis in eastern Ukraine to deploy ever-greater numbers of troops and military equipment to Eastern Europe, threatening Russia with war. 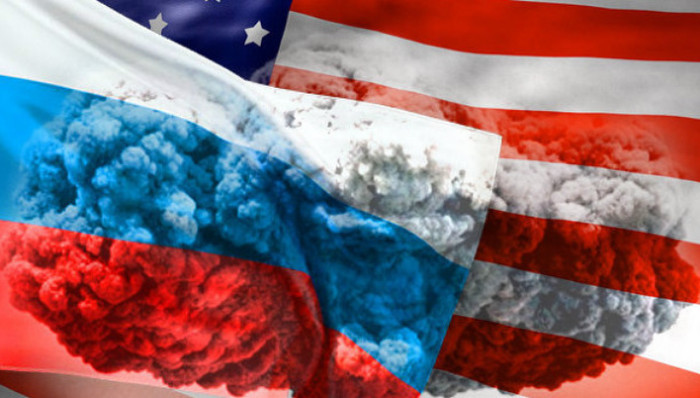 A US defense official told Reuters that the main purpose of the meeting was to “assess and strategize on how the United States and key allies should think about heightened tensions with Russia over the past year.” The official also said Carter was open to providing the Ukrainian regime with lethal weapons, a proposal which had been put forward earlier in the year.

Most provocatively, a report published by the Associated Press yesterday reports that the Pentagon has been actively considering the use of nuclear missiles against military targets inside Russia, in response to what it alleges are violations of the 1987 Intermediate-range Nuclear Forces (INF) treaty. Russia denies US claims that it has violated the INF by flight-testing ground-launched cruise missiles with a prohibited range.

Three options being considered by the Pentagon are the placement of anti-missile defenses in Europe aimed at shooting Russian missiles out of the sky; a “counterforce” option that would involve pre-emptive non-nuclear strikes on Russia military sites; and finally, “countervailing strike capabilities,” involving the pre-emptive deployment of nuclear missiles against targets inside Russia.

The AP states: “The options go so far as one implied—but not stated explicitly—that would improve the ability of US nuclear weapons to destroy military targets on Russian territory.” In other words, the US is actively preparing nuclear war against Russia.

Robert Scher, one of Carter’s nuclear policy aides, told Congress in April that the deployment of “counterforce” measures would mean “we could go about and actually attack that missile where it is in Russia.”

According to other Pentagon officials, this option would entail the deployment of ground-launched cruise missiles throughout Europe.

Pentagon spokesman Lt. Col. Joe Skewers told AP, “All the options under consideration are designed to ensure that Russia gains no significant military advantage from their violation.”

The criminality and recklessness of the foreign policy of Washington and its NATO allies is staggering. A pre-emptive nuclear strike against Russian forces, many of them near populated areas, could claim millions of lives in seconds and lead to a nuclear war that would obliterate humanity. Even assuming that the US officials threatening Russia do not actually want such an outcome, however, and that they are only trying to intimidate Moscow, there is a sinister objective logic to such threats.

Nuclear warmongering by US officials immensely heightens the danger of all-out war erupting accidentally, amid escalating military tensions and strategic uncertainty. NATO forces are deploying for military exercises all around Russia, from the Arctic and Baltic Seas to Eastern Europe and the Black and Mediterranean Seas. Regional militaries are all on hair-trigger alerts.

US officials threatening Russia cannot know how the Kremlin will react to such threats. With Moscow concerned about the danger of a sudden NATO strike, Russia is ever more likely to respond to perceived signs of NATO military action by launching its missiles, fearing that otherwise the missiles will be destroyed on the ground. The danger of miscalculations and miscommunications leading to all-out war is immensely heightened.

The statements of Scher and Carter confirm warnings made last year by the WSWS, that NATO’s decision to back a fascist-led putsch in Kiev in February, and to blame Russia without any evidence for shooting down flight MH17, posed the risk of war. “Are you ready for war—including possibly nuclear war—between the United States, Europe, and Russia? That is the question that everyone should be asking him- or herself in light of the developments since the destruction of Malaysian Airlines Flight MH17,” the WSWS wrote .

In March, Putin stated that he had placed Russian forces, including its nuclear forces, on alert in the aftermath of the Kiev putsch, fearing a NATO attack on Russia. Now the threat of war arising from US policy has been confirmed directly by statements of the US military.

These threats have developed largely behind the backs of the world working class. Workers in the United States, Europe and worldwide have time and again shown their hostility to US wars in Iraq or in Afghanistan. Yet nearly 15 years after these wars began, the world stands on the brink of an even bloodier and more devastating conflict, and the media and ruling elites the world over are hiding the risk of nuclear war.

US President Barack Obama is expected to escalate pressure on Russia at the G7 summit this weekend, pressing European leaders to maintain economic sanctions put in place in response to Russia’s annexation of Crimea last year. The latest outbreak in violence in Ukraine this week, which the US blames on Russia, is to serve as a pretext for continuing the sanctions.

Speaking to Parliament on Thursday, Ukrainian President Petro Poroshenko warned of a “colossal threat of the resumption of large-scale hostilities by Russian and terrorist forces.” He claimed without proof that 9,000 Russian soldiers are deployed in rebel-held areas of Donetsk and Luhansk, in eastern Ukraine.

“Ukraine’s military should be ready for a new offensive by the enemy, as well as a full-scale invasion along the entire border with the Russian Federation,” Poroshenko said. “We must be really prepared for this.” He said the Ukrainian army had at least 50,000 soldiers stationed in the east, prepared to defend the country.

Poroshenko’s remarks came a day after renewed fighting in eastern Ukraine between Kiev forces and Russian-backed separatists resulted in dozens of casualties. This week’s fighting marked the largest breach to date of the cease-fire signed in February.

Kremlin spokesman Dimitry Peskov told reporters on Thursday that Russia believed the previous day’s hostilities had been provoked by Kiev to influence upcoming discussions at the G7 summit this weekend and the EU summit in Brussels at the end of the month. “These provocative actions are organized by Ukraine’s military forces, and we are concerned with that,” he stated.

Each side blamed the other for initiating fighting in Marinka, approximately nine miles west of the rebel stronghold of Donetsk. Yuriy Biryukov, an adviser to Poroshenko, reported on Thursday that five Ukrainian soldiers had been killed in the fighting, and another 39 wounded. Eduard Basurin, deputy defense minister and spokesman for the Donetsk People’s Republic (DPR), told Interfax that 16 rebel fighters and five civilians had been killed.

Ukrainian forces also fired artillery at the rebel-held city of Donetsk on Wednesday. Shells landed in the southwest districts of Kirovsky and Petrovsky, killing 6 people and wounding at least 90 others. The city’s Sokol market was severely damaged, with several rows of shops burned to the ground.

Responding to Wednesday’s developments, members of the fascistic Right Sector militia have been called to mobilize for battle. Andrey Stempitsky, commander of the militia’s paramilitary battalion, posted a message on Facebook calling on those who went home during the cease-fire to “return to their combat units.” He warned that the Right Sector would “wage war, ignoring the truce devotees.”

The United States government lied to its people for years and years about a “communist threat.” This is proven to be a lie because of the continued hostility toward Russia despite the fact that it clearly now has a capitalist oriented economy. Instead of trying to compete in a friendly manner, the US government seeks to dominate, control, and subvert Russia’s progress. As a US citizen I deplore the continuation of conflict when cooperation would provide everyone in the world with a decent life as long as we also seek to control our destructive effects on our environment.

No one can control these super volcanoes which also exist elsewhere, including in Siberia. The Yellowstone Caldera is overdue for eruption according to its past history. The ash cloud will shroud at least the Northern Hemisphere of the Earth and impede food production to create disastrous famine.

the americans had better put a lid on the Yellowstone Caldera

American government and oligarchy comprises of AngloZionist Fascists who are mad devils !

Israel is allied with Russia & China and would not take sides in any confrontation with neoliberal cucks coming out of Washington, so Obama, Clinton, Bush, Romney etc.