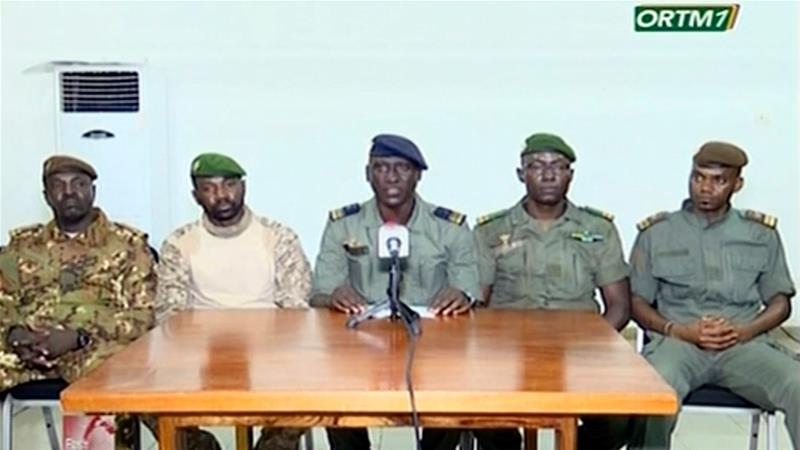 Starting on August 18th and continuing on August 19th, a part of the Mali military carried out a coup overthrowing the current president and assuming power.

The junta, which calls itself the National Committee for the Salvation of the People claim that they needed to act in order to prevent Mali from falling further into chaos.

Colonel-Major Ismael Wague said he was the spokesperson for the coup government.

“The social and political tension has undermined the proper functioning of the country for quite a while,” said Wague, flanked by soldiers.

“Mali descends into chaos day by day [with] anarchy and insecurity because of the fault of the people in charge of its destiny. Real democracy doesn’t go with complacency, nor weakness of the state authority, which must guarantee freedom and security of the people.”

Al Jazeera published the coup leaders’ speech, as well as President Keita’s resignation with a translation.

On the morning of 18 August 2020, soldiers began firing bullets into the air at a military base in Kati, a town 15 kilometers away from Bamako, the capital of Mali.

After moving into the capital, the mutineers arrested Minister of Finance Abdoulaye Daffe, the Chief of Staff of the National Guard, and Moussa Timbiné, speaker of the National Assembly.

The Prime Minister, Boubou Cissé, appealed for dialogue with the mutineers, acknowledging they held “legitimate frustrations”.

President Ibrahim Boubacar Keita resigned and dissolved parliament late on August 18th. This came hours after the coup leaders detained him at gunpoint.

On August 19th, army officer Colonel Assimi Goita announced himself as the leader of the military coup.

“Let me introduce myself, I am Colonel Assimi Goita, chairman of the National Committee for the salvation of the People,” he said after meeting top civil servants.

Goita had appeared among the group of officers seen in the overnight televised statement but did not speak.

During that address, Wague said all international agreements will still be respected and international forces, including the UN mission in Mali and G5 Sahel, will remain in place “for the restoration of stability”.

The coup leaders also remain “committed to the Algiers process” – a 2015 peace agreement between the Malian government and armed groups in the north of the country, Wague said.

The takeover was quickly condemned by Mali’s regional and international partners, who fear Keita’s fall could further destabilize the Sahel region where al-Qaeda and ISIS-affiliated terrorists carry out attacks with increasing impunity.

Meanwhile, chairman of the African Union and South African President Cyril Ramaphosa on condemned the “unconstitutional change of government” in Mali and demanded its detained politicians be freed.

The UN Security Council will be briefed on Mali behind closed doors on August 19th at the request of France and Niger, diplomats said. UN Secretary-General Antonio Guterres had called for the immediate release of Keita and other detainees.

China said it opposed regime change by force while EU leaders called for the release of those held.

“We call for the immediate freeing of prisoners, and for a return to the state of law,” said EU Council chief Charles Michel after a video summit of the bloc’s 27 leaders.

The coup coincided with opposition plans to resume protests against Keita.

It, however, shouldn’t be considered that the junta is on the side of the opposition, according to their claims they took power to restore stability and organize new elections, for whoever wins them.

Starting from June 5th, tens of thousands of protesters have taken to the streets under the umbrella of the so-called June 5 Movement (M5-RFP) to demand the president’s resignation. They accuse him of allowing Mali’s economy to collapse and of mishandling a deteriorating security situation that has rendered massive regions of Mali ungovernable.

Military leaders had ordered closure of all border crossings and imposed a night-time curfew. “As of today, 19 August 2020, all air and land borders are closed until further notice. A curfew is in place from 21:00 to 05:00 until further notice,” Col-Major Ismaël Wagué, Deputy Chief of Staff of the Malian Air Force, said in a televised address.

He also invited all opposition groups to talks for fresh elections.

Opposition member Mahmoud Dicko announced that he is leaving politics as a result of a meeting between him and some of the soldiers that took part in the mutiny.

It is unclear how the situation will develop from now, Mali was in a state of chaos under president Keita, but a military coup with no clear agenda in sight apart from “restoring stability” and organizing “fair elections” seems like it would create either a power void or allow for repression. At the same time, terrorists in the Sahel continue spreading their influence further.

I cannot claim expertise here…this could reflect the tensions between turkey and France. turkey attempts to exploit ISIs related groups in Norther Africa in order o widen their influence in former French colonies…this could be a positive development regarding ISIS. I suspect that the Malian military do not wish to provoke another civil war with the Tuarag—nobody wishes to battle with these fierce semi nomadic peoples

Chaos in the third world is inevitable, with or without western interference.

What I read is that they are aware of the internal problems since they refere to the Algeria prosess, since that involves the tribes in the Atlas region witch spans thru several nation incl the Tuaregs, and so on, the main problem, I agrees isnt the Malians, because the present coup just removed an French/western installed bitch, after the French coup some few years ago, witch was by large ignored comepltelly, and then came the ISIS/whatever, witch is also backed by foreign non African regimes as the Imperial banana republic and Turdians, so we have to watch what will MaCronys do, because the coup was because of the legaly elected previous president made just one fault, He wanted to nationalise the mines, etc, and that is an nono when it comes to the west.

I hope that this people have the future of Mali in their minds, and never ever trust the west incl France. The scrap book used was the same as ever, like in Libya, inflic chaos thru having their mercs terrorising the population and then throw in some piss keepers to help, of course, the Malians and in the same time create an fundation or some quasi-legitimat reasons where they, ZATO and the French, created an condition to where they could put in whom ever they wanted and thats what this Fired president is, a puppet, so all in all, I am not that surpriced that this after all came, but I hope the Malians knows much better than what I do about whom is their enemys, but I hope the future improves and do cooperate to build that, unite, Mali and the nation will once again by yours.

FREE West Sahara, an nation that most forgot and ignored, because of Marroco, but is suffering under their rule and by large is been violently keept down and out.