The examples of Iraq and Libya have convinced the North Korean leadership that only nuclear deterrence can protect them, so no sanctions can dissuade them, Russian President Vladimir Putin said.

Pyongyang will not relinquish its military program under pressure of sanctions and military threats, because the examples of Iraq and Libya have convinced it that nuclear deterrence is the only credible way to ensure its security, President Putin told journalists on Tuesday. 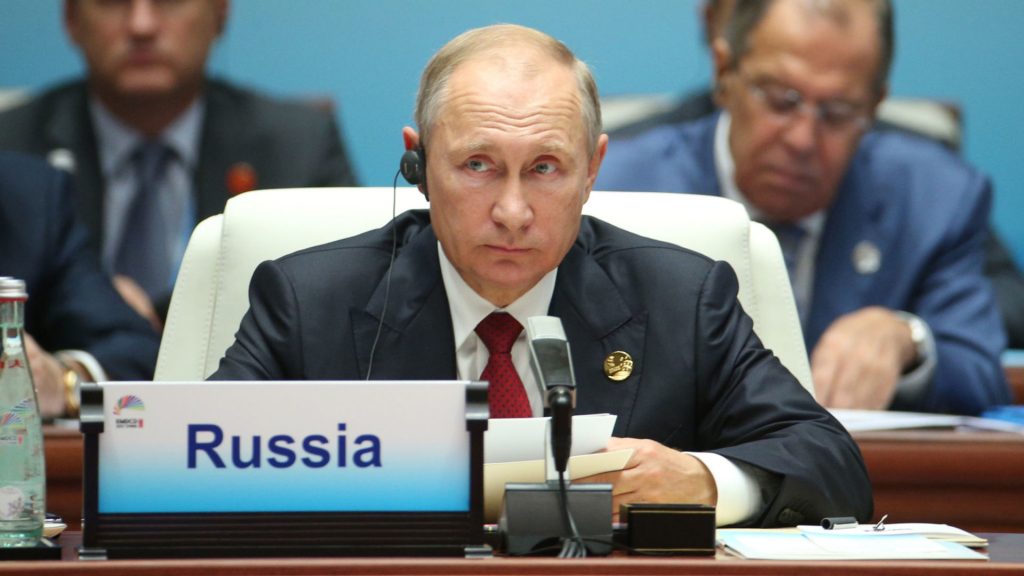 “Ramping up military hysteria in such conditions is senseless; it’s a dead end,” he added. “It could lead to a global, planetary catastrophe and a huge loss of human life. There is no other way to solve the North Korean nuclear issue, save that of peaceful dialogue.”

The 2003 US-led invasion of Iraq and the 2011 NATO intervention in Libya both came after the leaders of those countries submitted to international pressure and relinquished their programs of weapons of mass destruction in exchange for sanctions relief.

North Korea for its part chose confrontation with the world community, successfully developing nuclear weapons and currently, rapidly perfecting the means of their delivery.

“As I told my colleagues yesterday, they will eat grass but will not stop their program as long as they do not feel safe,” Putin said. “What can restore their security? The restoration of international law.”

Moscow supports the idea of deploying “security troops” acting under a UN mandate to eastern Ukraine and will submit a draft resolution on the issue to the UN Security Council, Putin said.

Russia sees the role of such troops as protection for the Organization for Security and Cooperation in Europe (OSCE), which monitors the stalled process of disengagement between Ukrainian troops and militias of its breakaway Donbas regions.

Subject to the consent of both parties, the mandate would be given for deployment along the disengagement line and a complete pull-back of heavy weapons, the Russian president said.

“If all these conditions are met, I believe such a deployment would certainly benefit the process of solving the conflict in south-eastern Ukraine,” Putin said.

Putin also commented on the planned supply of lethal weapons to Ukraine by the US, saying that the international consensus was that “supplying arms to zones of conflict does not help reconciliation and can only make the situation worse.”

He warned that in the case of the Ukrainian conflict more arms would not lead to a radical change, would only cause more casualties and potentially cause the conflict to spill over to other regions.

The US admin hates diplomacy and dialogue. It requires rational heads, logic, maturity and intellect – of which they do not have any. Bombs, they have bombs. That’s it.

All what Putin, Lavrov and other top Russians say make so much sense, the more when compared to the incompetency, hypocrisy and nonsense from the leaders of our Western regimes…

This is exactly why the USA is going down! Even their so called “allies” will not follow them into an inferno! The USA will fail miserably! They will lose in trade wars with China, they will lose Allies who they will insist must also sanction china. They will lose this war with NK because millions of SK’s will die in the process! This will be their true ending! Thank God!

Nobody in their right mind would trust the criminally insane Jew pedophile rape cult psychopath parasites and their swamp slaves who’ve gained control of much of the US government. These criminals need to be contained and removed from power for our planet to have a better future.

The key thing i took from this is putin saying that n korea will not give up weapons -as only those weapons guarantee n koreas and thus kim jong safety! Absolutely, no one now will ever believe what Nato promises .If I was a leader,no problems lets make a deal…but take away my weapons first?…no thanks!

The US and NATO have only proven they are in the regime change business and lack the integrity needed in maintaining international law and security. Their current and continued actions seem more of that bent on global conquest rather than that of ensuring security and international laws, and only when it suits them to push their dominance on the world stage. This kind of Bobble-Headed thinking is what is currently leading to global destabilization, nothing have they ever attempted to do in the past 30 years has been for stabilizing world peace.

The rest of us are just along for the ride to global catastrophe while they destroy the world and remake it into their own image , one of control ,ever watchful presence in everything we do ,say and react to. This world is everyday becoming more Orwellian than we can imagine. The citizens in the world all they do is their cosplay and fiddle and dance as the world burns , but hey they are happy. They will realize too late that their world is more fragile than they thought and believed.

I agree! I think NATO is the bigger bully to the UN! NATO literally is a coalition of “do what the US says and what the US does or else”. UN mandates mean nothing! They just say they will have” a coalition of the willing and who the fuck is gonna stop us anyway!” The USA needs a war on terror in order to embark on global hegemony via ME oil rich nations. OR / AND A Cold War in order to bring in huge profits for the MIC!

USA: “Carry a big stick, then lie, scream demand and ‘yeee haaa’ all over the place”!