Palestinians Strike back, November 12 2018: https://www.rt.com/news/443764-israeli-fighter-jets-strike-gaza/?utm_source=Newsletter&utm_medium=Email&utm_campaign=Email and they speak the ONLY LANGUAGE those Zionist Ashkenazis UNDERSTAND: https://www.aljazeera.com/news/2018/11/hamas-warns-israel-extend-range-rocket-fire-raids-181113074530680.html and
https://www.presstv.com/Detail/2018/11/13/579875/Palestine-Israel-Hamas-counterattack-guided-missile-bus-Jabalia-Gaza-Strip and Israel pulls TWEETS: https://www.rt.com/news/443821-israeli-threat-deleted-twitter/

I’m getting these notifications on disq.us all the time lately….

Suspicious link
This link is marked as suspicious
Are you sure you want to continue to disq.us 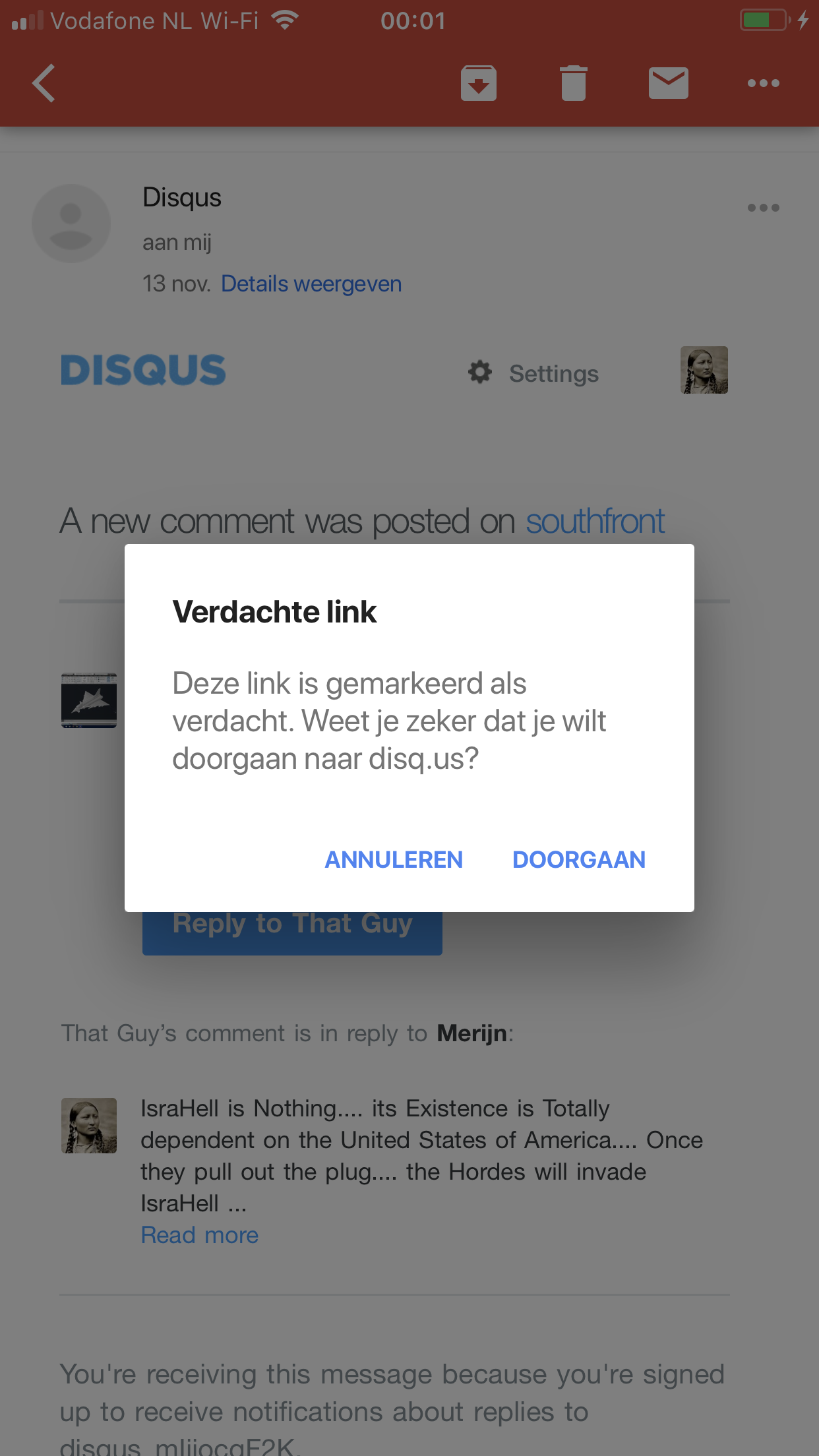 Do you have the same thing… it seems there is something attached to my mails…if I want to open them I get this notification….

Now you must realize the END is NEAR for our Freedom.

I get much worse.They try to have my email account closed, more than a few times…. the account I use to send my many political emails to my many hundreds of contacts.

I just received another notice and this time my account has been closed.

As I have said numerous times, if we do not deal with the House of Rothschild and Israel ,we are all doomed and quite honestly everyone is afraid to do anything meaningful, except talk and complain

We will pay a terrible price if no action against them, is taken

I am not too concerned as I have reached many thousands of people and some are starting to talk about my solution, so maybe someone will finally take action. I am hearing and reading that is happening , via “Veterans Today” and “Brendon O’Connell”

I have done my job.

It is up to young people now.

They can probably take down aircraft as well.

The second thing is,, the IDFs and their friends in EU/UN whom lies and is inbedded with the scums of this earth, that the last time, the most “moral army” in the world, the 5 largest,attacked gaza, they where kicked out after 3 days, urban war fare is much worse than jungle war, and in that, Hamas out gunned and out maonvered the coward Joos whom sudenly expirienced the real deal when somebody actually was firing back, and they flew home, I dont think its going to be much different this time either, and I do remind you about the assasination of one of their comanders, done the Joo way, since the days of probitions, an drive by shooting.
And of course, this pissed them of, but hey, its weird isnt iit, when the agresore is controlling the narrative etc, to owns the MSM, in Norway the coments are even worse than in ISISrael it self, that I base on the fact that there are still sane Jooos, but the “vikings” are just plain idiots.

The last time, they where kicked out and the problem is that Palestinians and Hamas have no defence against their random firing and airforce, they are sitting ducks, and still people whine about anti-semetism, this is so glearingly obvious anti-semetism that its possible to be, how f…. up are you.
huh
Again, like Yemen, and Afganistan, Syria, they drool about Hamanism, yeah, cries some crocodil tears about never again, millions killed in ww1, while millions are killed, maimed, traumatism, malnurism, to mines, DU(how silent isnt it, about something equall if not worse than anything I can imagine incl gass, this kills for eons to come and is littered everywhere incl europa) as we speak, and they have no shame lying us straight into our faces about peace and prosperity, free trade my ass.
And this time, even Russians flew behind an desk and hopes nobody wants to ask any pesky questions about Palestina.
And then we have the Arabs, well……

Yeah, after 75 years of enthnic cleansing, slowly taking over their land, it only gets worse.
And noboddy can do anything about it.
But puts Russia under sanctions for an election held where the outcomes was clear from the begining, and now war at all, but this, then the same scums are dead silent, how convinient, isnt it.

Its an demonsration of power, they can do this because they can, and we cant do shit, because the corruption is obvious, and yet they get away, every god dammed time for years, countless of time.
I told you, we are all becoming Palestinians, you laughed years ago, but they where the beta test, when the Palestinians are wiped out, they will come for the rest.
Its infact America that is the battlefield, its there it will be desided, and where the war starts.

Looks like a planned provocation and escalation by the baby rapers.

Very true. But yet theyre already in a concentration camp so maybe they need to risk it.
Ive always wondered why the jews went so easily into nazi concentration camps…i guess,thankfully, im not in such a hopeless situation and have to make such desperate gambles.

Probably seems clearer from the outside.

nice! one final time once and for all!

Yeah finally you Khazarian-Sephardic-Ashke Nazi-Sabbatean-ZioNazis get slowly but Surely chopped up….hear that thunder in the distance Hasbara-boy?…run.. run but you cannot hide… the mood is changing….your days numbered…

Yes Israel will crush these terrorists once and for all

Remember 911…these Dancing Israelis were so funny ???… IsraHell Conquers the World….Yinon-Plan 2.0

Yeh we remember 9/11 and we already got Osama.

Yeah Tim Osman with a face-lift on the Bahamas enjoying his life as a CIA-Pensionado….New Name New Face….Dumped his Body in the Ocean…???…that is why Seal Team Six had to disappear…. they knew too much…

nope we got him. what happened to ST6 is unfortunate but there is still two of them alive.

Oh so Tim Osman a.k.a Osami ben Laden is in Hell Aviv at the moment?

Mafia methods. You pay some bloodstained outsider to kill someone you dont like, and make your insider kill the bloodstained guy to hide the tracks.

The murder case is resolved, the murder found and noone care about the rat´s weird death.

How much was that tinfoil hat ?

How much were thes Tinfoil Plane, Boat & Bus…? 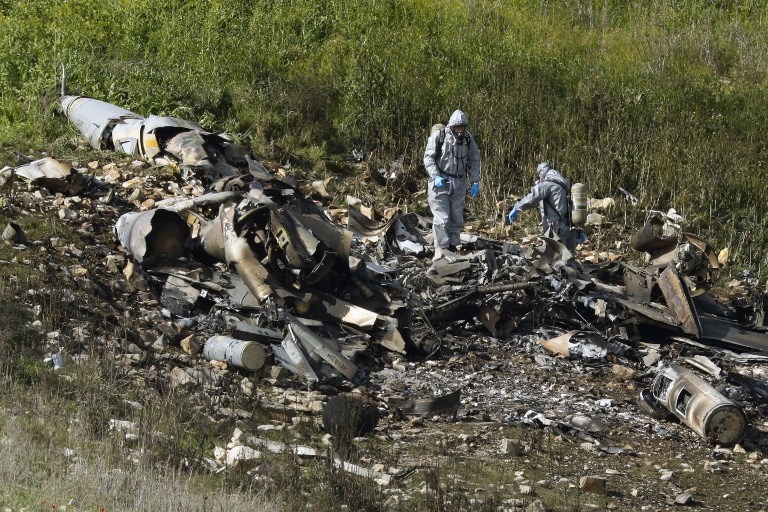 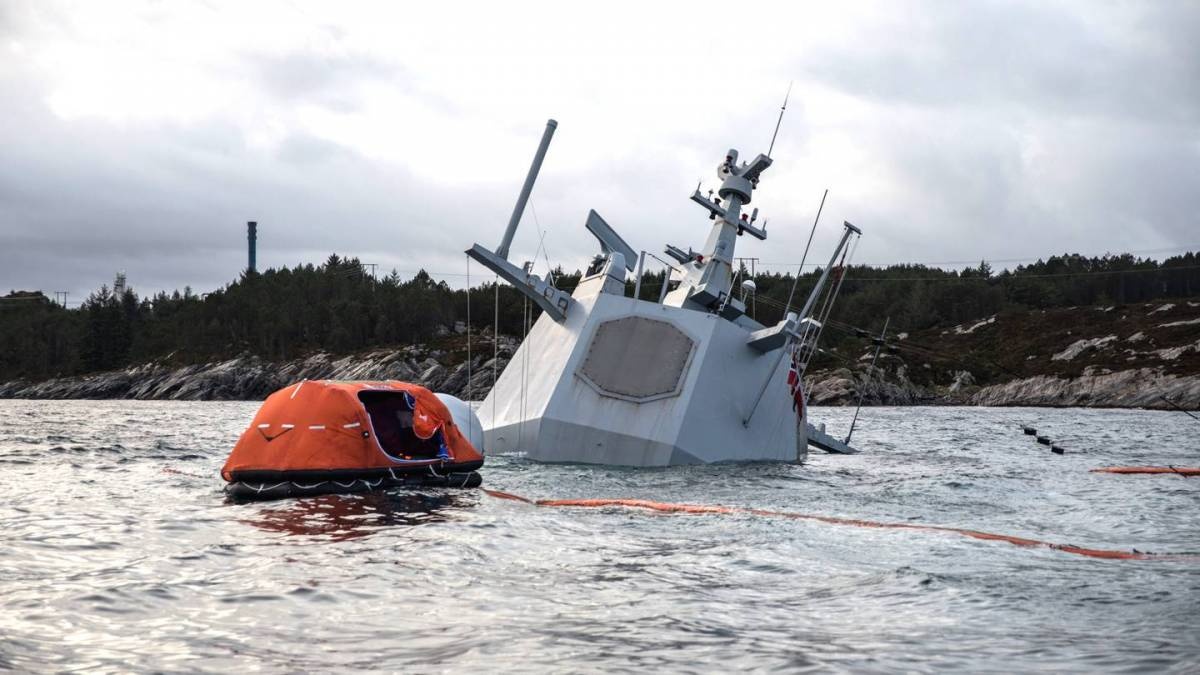 IsraHell wanted to get rid of Egypt, Libya, Iraq, Iran, Afghanistan….and Rename it: Greater IsraHell…. soon you’ll have a Smaller IsraHell….no problemo…can Swim back to where you Folks came from…..I hope you can swim or start practicing… you still got some time left…

The Same goes for SatanYahoo and his Illegal Occupation Called IsraHell… he planned to Sacrifice his Folks too…what a coincidence…mo’ ATGMs….

The cause of supposed Hamas strike on the Israeli bus is very suspect. Watch the video the Israeli’s are supplying, if you look closely you will see the bus isn’t hit with a missile but rather there is an explosion beneath the bus.

The missile the Israeli’s say was used has a distinctive undulating pattern when it flies and leaves a heavy trail of black smoke. NOTHING like that happens in the video.

Further the latest Israeli story is that it was a military bus and a soldier was killed, the earlier story and one that fits the video is that it was a local bus and the last person off was a Palestinian who was killed in the strike.
So I am going with a False Flag to allow for the slaughter of Gaza; by deception you do war, says it all.