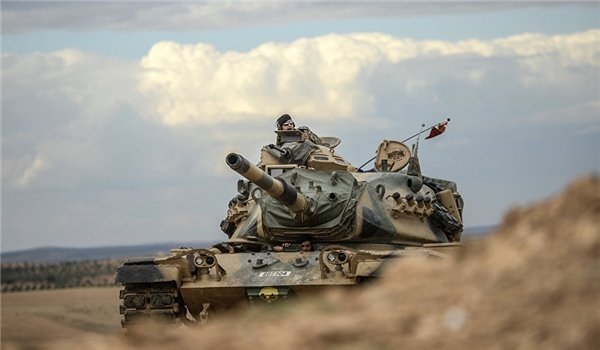 On November 27th, Turkey and the UN-assigned Libyan Government of National Accord (GNA) signed a memorandum of understanding for military cooperation. The deal was announced on December 7th, and since then Turkey has repeatedly said that if the GNA asks for military assistance, Ankara would provide it.

On the diplomatic front, Turkey has wasted no time, with Recep Tayyip Erdogan going to Tunisia to gather various support from countries in the region. So far, both Tunisia and Algeria have said that they would not take part in the conflict, and urged Turkey to avoid involving itself. At the same time, Turkey and the GNA also increased their propaganda efforts over the conflict setting ground for a Turkish military intervention.

To provide a sense of urgency, the GNA formally requested “air, ground and sea” support from Turkey on December 26th.

“We cannot stay idly when the UN-recognized Libyan government demands our help,” Ankara Deputy Emrullah İşler said. “As Turkey, we will accept the invitation of legitimate Libyan government, with whom we have a history of relations spanning 361 years,” he added.

Erdogan said that it was a matter of time until Turkey could provide the requested support, as mentioned above. Ankara will attempt to use its ground, air and maritime support to further its interests in the east Mediterranean Sea further.

One of the reasons of the Turksih support to the GNA is the agreement on the shared maritime zone reached by the sides. Ankara sees it as an important step to legalize its drilling activities in the Eastern Mediterranean: 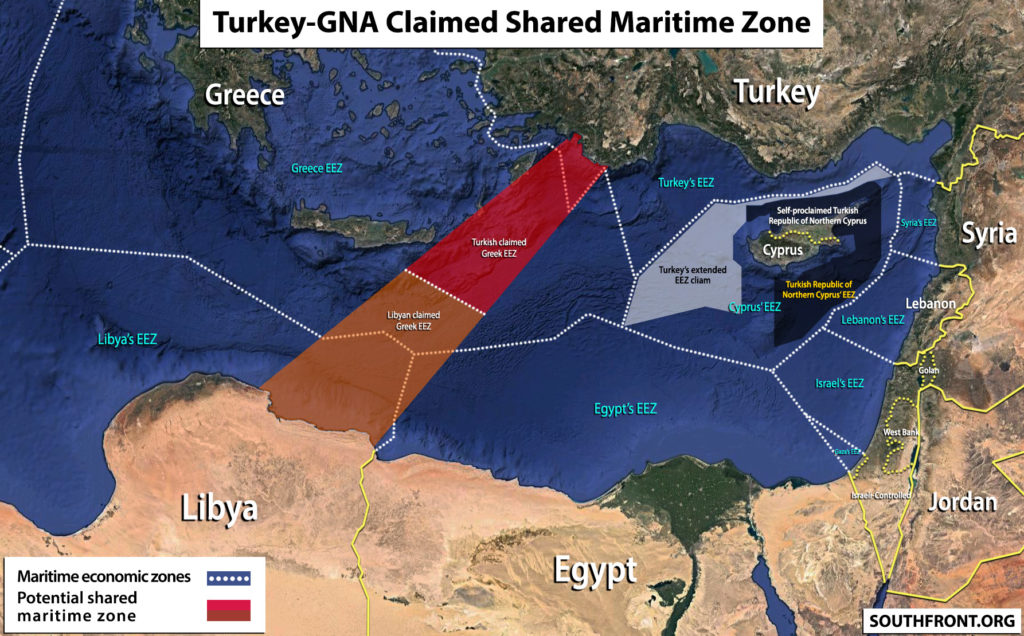 Even before officially announcing that it would take part in the conflict, Turkey has supplied the GNA with weapons, ammunition and equipment. In June 2019, Erdogan confirmed that Ankara was selling weapons to it.

“We have a military cooperation agreement with Libya. We are providing to them if they come up with a request, and if they pay for it. They really had a problem in terms of defense needs, equipment,” Erdogan said, back then.

Around the same time, photographs surfaced of Turkish “Kirpi” armoured vehicles that were delivered to the GNA. 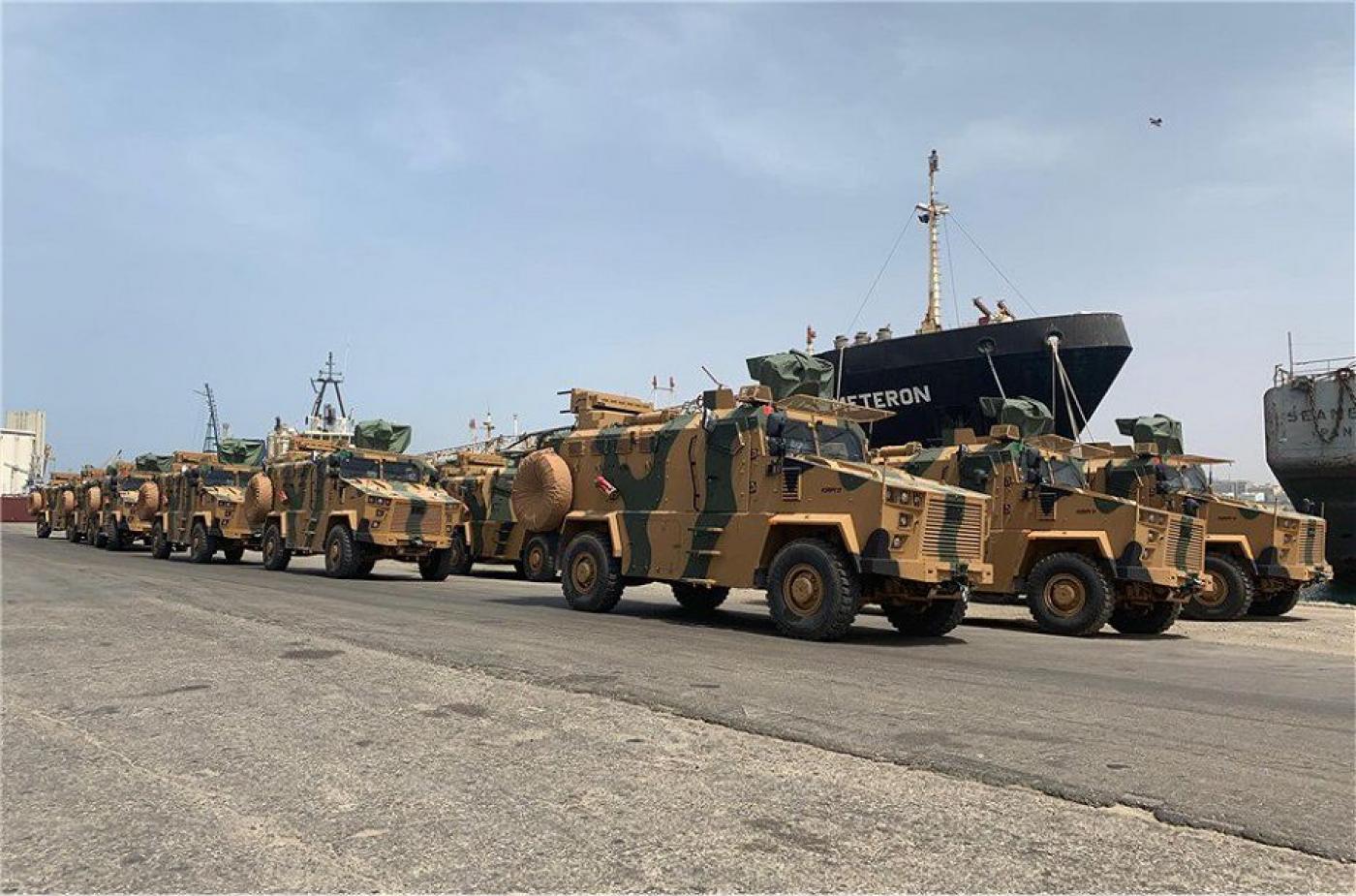 Since late November and early December, these deliveries have appeared to be ramped up. The Turkish military supplies to the GNA is a mix of weapons, ammunition, and other military equipment. Turkey also deployed Bayraktar TB2 unmanned aircraft, which can be configured to carry weapons. They operate from airfieldsin Tripoli and Misrata.

The Libyan National Army shot down and desroyed several another Bayraktar TB2s during the battle for Tripoli. 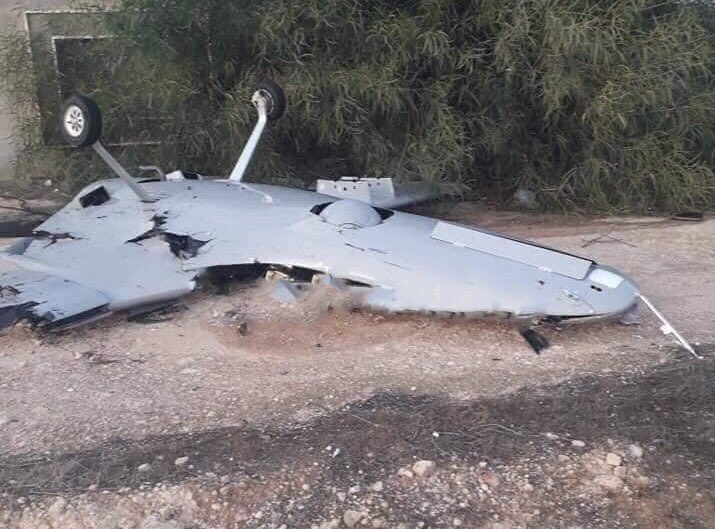 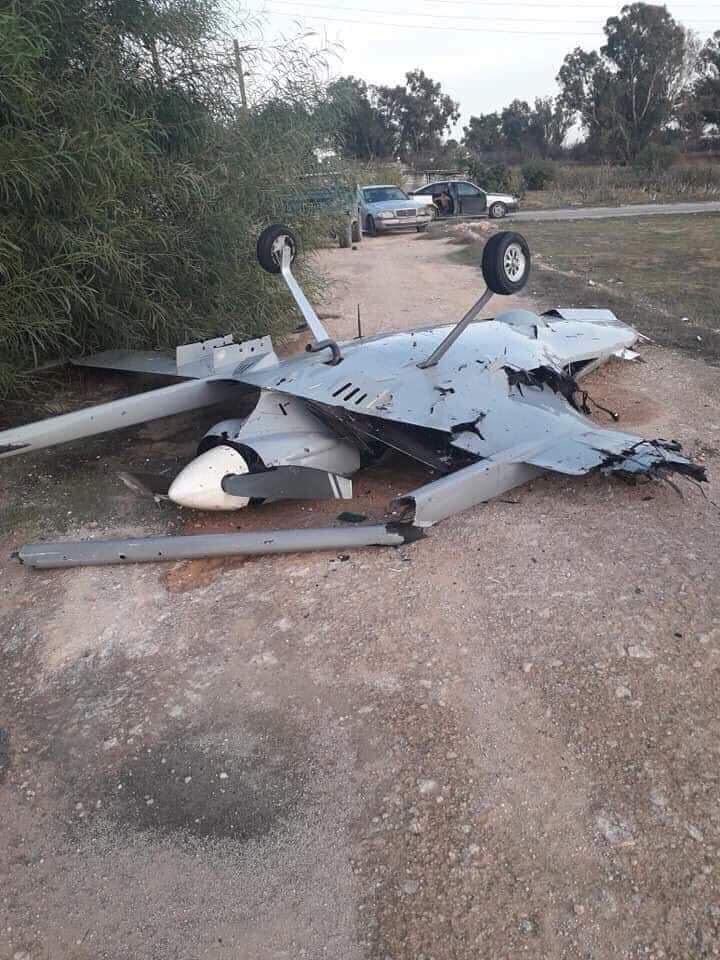 The deliveries of weapons, ammunition and various equipment could be ramped up even further, how effective this would be for the GNA against the LNA, which is gaining ground remains in question. 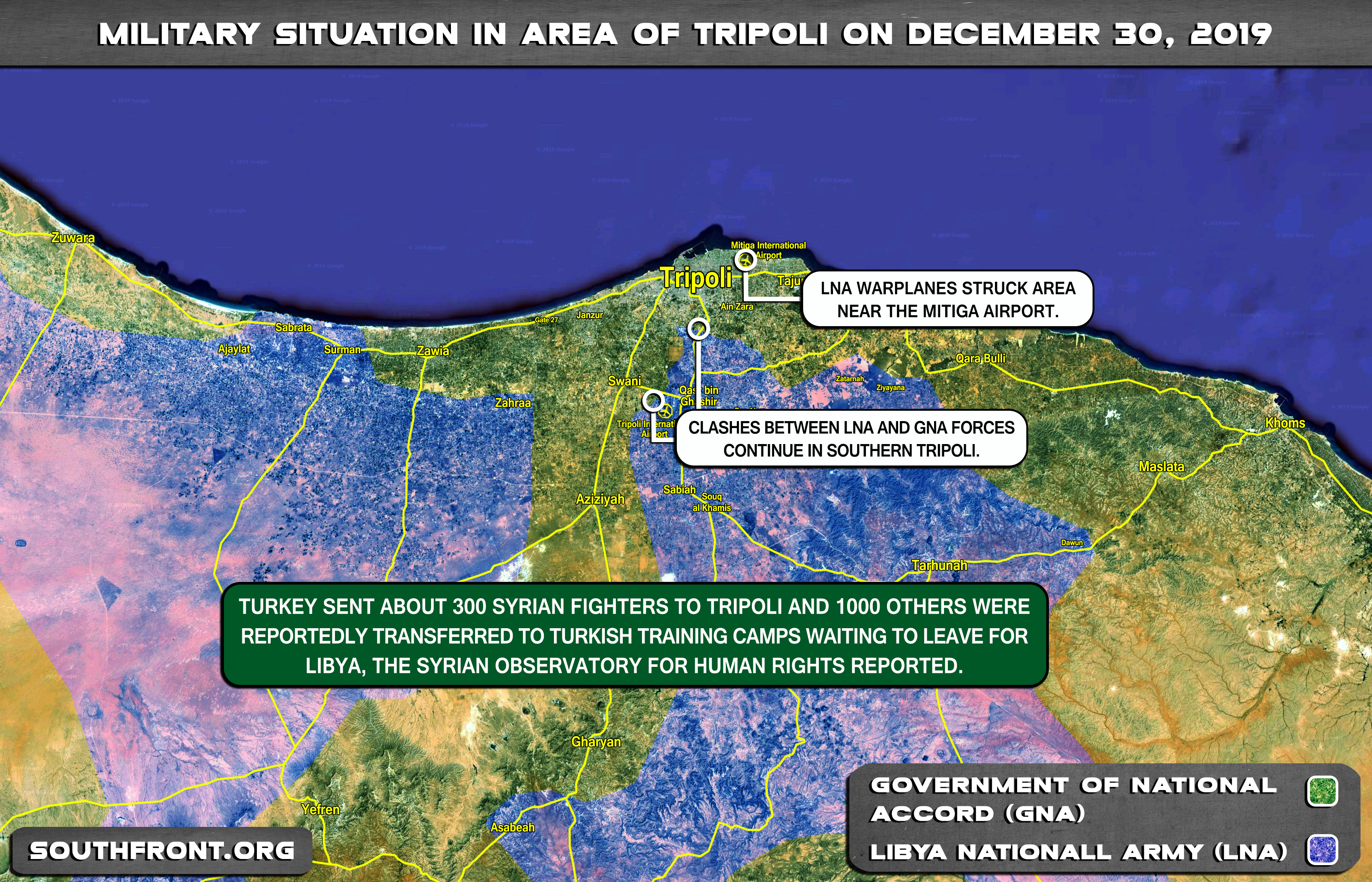 The GNA requested three components of asssistance: “air, ground and sea”. In terms of air support, Turkey can deploy more Bayraktar TB2s, which are currently present in the conflict, but even a dozen such drones wouldn’t be enough to change the situation on the ground, keeping in mind the LNA has proven capable of downing them.

Turkey needs to be able to deploy an air group somewhere on the ground and carry out strikes from there. Approximately 90% of Libya is under LNA control, so there is no safe location for a deployment there. So far, Tunisia and Algeria refused to play any direct role in the conflict, while the self-proclamed Turkish Republic of Northern Cyprus is still too far away. Egypt has been quite vocal and active in its support of the LNA, so a deployment there is out of the question. Italy doesn’t support the LNA, but it is strictly against a Turkish intervention because the expansion of the Turkish influence threatens its financial interst in the Libyan oil trade. So, it is rather unlikely.

Turkey operates no aircraft carriers. Its TCG Anadolu amphibious assault ship can be configured as a light aircraft carrier, but it isn’t ready yet, work on it is on-going and it is expected to be delivered some time in 2020. Therefore, it remains unclear how Ankara will be able to provide the GNA with an extensive air support without endangering its own aircraft by deploying them close to the combat zone.

In terms of maritime support, Turkey can employ its Navy’s capabilities use its warships to support the GNA. As mentioned, it has no aircraft or helicopter carriers that can be used to project power in the conflict. A deployment of a large naval group in the area is risky, if one takes into account the hostile political environment, with Egypt, Cyprus, the UAE and Greece are strictly opposing any such actions. This deployment also goes against the interests of other NATO allies such as France and Italy.

Additionally, deploying warships near the Libyan coast puts them in jeopardy from modern anti-ship measures, for example, anti-ship missiles that can be launched from the shore. The recent example is Yemen’s Houthis who have repeatedly proven that missiles, can be quite an effective tool to combat even a more technologically advanced enemy. In a worst-case scenario, the Turkish Navy can suffer notable losses, and the risk of this could be too real to tangible to overlook. 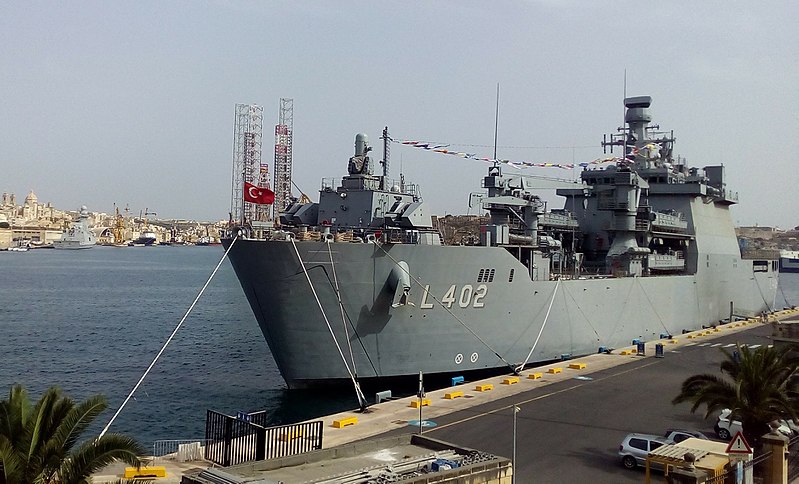 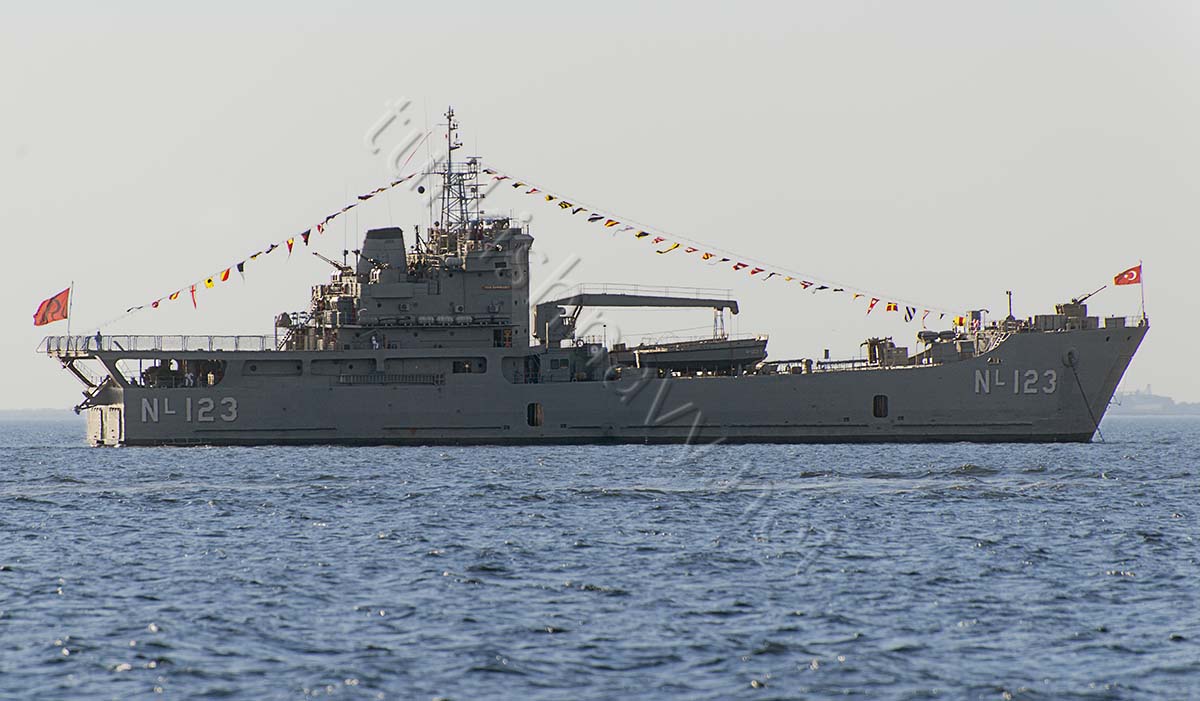 With 5 modern landing ships, it is questionable how capable of a landing can be achieved, keeping in mind that the note about the LNA using all means and measures that it has to prevent such a scenario.

In these conditions, the most likely scenario of Turkey’s ground operation is the deployment of a limited number of specialists, the public employment of private military contractors, as well as efforts to redeploy members of its proxt groups from Syria to Libya.

This could prove somewhat effective to support the GNA existence. However, these reinforcements will be apparently not enough to reverse all the gains that Haftar’s LNA made during the past years.

In terms of the diplomatic environment, Egypt, the UAE, Italy, France, Greece are strongly against Turkey’s operation in Libya and the agenda it appears to be following towards spreading its influence in such a manner. Egypt and France recently discussed the situation in Libya, and a potential coordination of efforts if need arises. The US is unlikely to make any direct steps to stop the Turkish operation, but Washington employs its diplomatic influence to oppose it. Russia assumed a rather neutral stance, apart from reports of the presence of Russian PMCs assisting Haftar’s forces. So, Anakra will unlikely receive a direct support from Moscow.

As the Turkish Parliament moves towards the approval of the military operation in Libya, Ankara appears two have two main options:

It will probably be from Tunisia anyway. Erdogan was there last week.

I don’t think Erdogan will send Turkish troops into Libya, but just mercenaries from Syria.

His Uyghurs of the TIP probably.

They probably will send terrorist and spec ops and advisors and if they succed I’m pretty sure they will send many troops as they have troops already in Somalia , Syria , and Turkish Cyprus.

Turkey has a fleet of A400M Atlas strategic/tactical airlift and the 1st Commando Brigade paratroopers.

Agreed – both Tripoli and Misrata ports and airfields remain fully operational and can receive seaborne and airlanded forces (with heavy weapons and armor)to combat brigade strength in 72 hours, easily

Excellent SF summary of neo-Ottoman military and political capabilities, intent and options. The brutal reality, which we have seen, and see daily, is that Turkey copies the Israeli pattern – both do whatever they want and both understand that for all the huffing and puffing, third state parties will never actually confront Turkey either militarily, on the ground – at least so far. Not NATO, Russia,Greece, Italy , UAE, Egypt dare attack Turkish forces to protect the LNA. The best the LNA can hope for is some technical assistance. Egypt MAY send some token force to “protect ” Barca/Cyrenaica but certainly will not directly attack Turkish forces entrenched in Misrata and Tripoli. Why in hell LNA stalled their ground offensive for six months post May and failed to take imperative objectives around southern Tripoli districts is a mystery, and now may be too late. Both Qadhaafi in 2011 and Assad 2012-2013 completely under-estimated the extent of their enemies and their determination to destroy Libya and Syria. Be in no doubt whatsoever – Turkey is in Libya boots and all, the so-called superpowers will stand by and do nothing. Libya is now fighting for its existence as a nation-state – the alternative is becoming a vassal appendage to the neo-Ottoman empire.

No doubt Erdogan has big ambitions. But with what? Turkey is at most a regional power. Most of its weapons are foreign-made. In a worst-case scenario, it would be in grave difficulties. What Erdogan is good at is betting. He bets his rivals won’t dare take certain steps because he is a believer that the daring can get away with whatever they want. However, there is a limit to this, and eventually it will have to do more than guessing right.

Yes but when is the limit reached or the red line crossed ? Not yet.