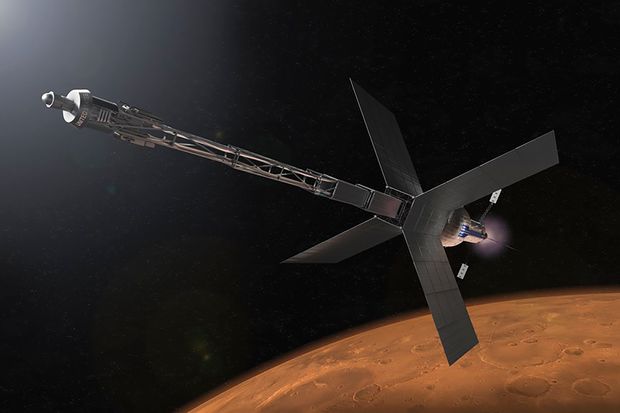 The US Department of Defense, as well as NASA are working hard towards removing barriers before joint civil and military space projects “in response to escalating foreign threats beyond the atmosphere.”

The purpose is to improve efforts to explore the region around the moon and extending the lifespan of satellites. Many details are still under development or remain secret.

Of course, the reason for this militarization are Russia and China:

“The driving force behind the changes are moves by Moscow and Beijing to challenge US space interests anti-satellite weapons, interference, and other potentially hostile technology. According to a series of reports from the Pentagon, the White House National Space Council, and industry study groups, those secret systems, often operated by specially trained military forces aimed at dominance in space, are threatening both U.S. military and private assets. in orbit around the Earth. As a result, the Pentagon plans to tap into civilian expertise and programs to gain an edge in this emerging war combat domain,” the Wall Street Journal reported.

US President Donald Trump’s crown achievement: the US Space Force is in the center of this.

According to government and industry briefed on the matter, civil-military cooperation is expected to eventually extend to the defense of planned NASA bases on the lunar surface, as well as to protect U.S. commercial operations aimed at getting there extract water or minerals.

Building on original NASA and military technology, Northrop Grumman has demonstrated the commercial utility of connecting a new propulsion system to an aging satellite with depleted fuel reserves as a way to keep that spacecraft in orbit beyond its intended lifespan.

“We are very excited about where that will go” in terms of government acceptance of refueling and space assembly options, said Tom Wilson, Northrop vice president of strategic space systems. “We have a lot of talks,” he said, “with the Department of Defense, the National Security Community and NASA.”

The most dramatic evidence of the shift in US policy is “looking at the barriers between civil, military, and commercial space in terms of an integrated strategy for our country,” said Pam Melroy, a former astronaut and former Pentagon official.

“Things are changing from ideas to actual programs,” said Joel Sercel, an aerospace entrepreneur who previously worked for the Pentagon and NASA.

All barriers in front of the US Military using Elon Musk’s SpaceX satellite network and space launches are slowly going away.

Other companies, too, will join in on the fun, to “counter Russia and China” by preemptively militarizing space.

The purpose is to improve efforts to explore the region around the White House and the men and women of the Congress and their lucrative non-repayable loans, such as take the money and run, even in deep space if needed.

They are going to take the printing machine with them to save the Dollar and make it the reserve currency in our solar system. Lol.

Some time ago China and Russia made a proposal for an international binding treaty to ban + outlaw any militarization of Space [Earths Orbit + Moon…so far]…You Can Guess…The AmeriCunts indignantly rejected the proposal.

They thought they had the technology to do so, except they forgot how to build heavy lift rockets, being preoccupied with banal and useless RD that produced very little.

Fog of War
Reply to  Jesus

They have SpaceX however. Don’t fall for its BS cover story of being a ” private ” enterprise . Follow where Musk gets his funding from. This was all planned decades ago, China and Russia are probably only now realizing what is about to happen.

You are aware that ‘another‘ SpaceX prototype ship/rocket exploded yesterday?

Fog of War
Reply to  Volker

So ? Seriously guy, accidents happen. It happened to the Soviets and Russians many times also. This has no bearing on my statement whatsoever.

Their SN1 to SN9…ALL failed crashed + burned or exploded…So you saying?

Fog of War
Reply to  Volker

Fake x is only just that,where as the soviets are far more advanced in every sphere when it came to outer space orbit,fk the fake cia moon landings too!

This is comical. Let us keep pretending that NASA can get to the moon.