SouthFront: Analysis & Intelligence is offering a new exclusive product, “Military Analisis” . We chose the Kazakhstan’s Armed Forces for this paper because amid, an acute situation in the Central Asia, a military capacity of the biggest state in region is especially interesting for research. 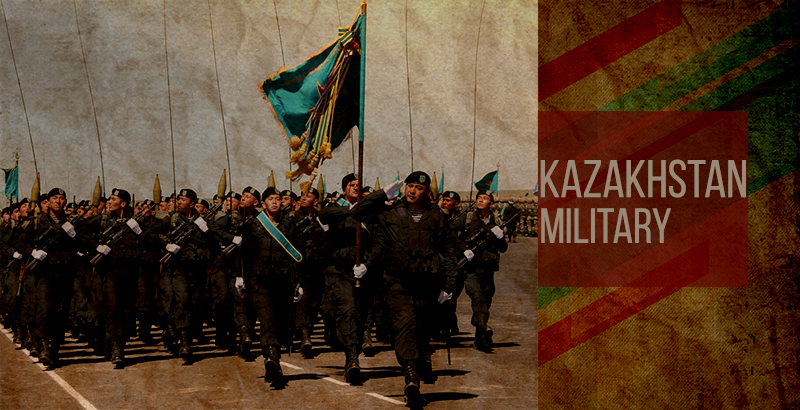 Spreading from the Caspian Sea in the West to China in the East, occupying more than one million square miles, Kazakhstan is one of the largest countries in the world with the population only about 17 million consists of many ethnic groups: Kazakh 51%; Russian 32%; Ukrainian 5%; German 2%; Tatar 2%; Uzbek 13%. Today country becomes a core security and geostrategic factor in the Central Asia region. After the fall of the Soviet Union the country’s military had some staggering periods, but today Kazakhstan’s armed forces meet the highest professional standards mostly thanks to Russia and CSTO as well as to the good national military governance.

The cumulative military budget 2013-2015 has reached almost seven billion dollars. The Kazakhstan’s army modernization is based on a domestic military industry. As the President Nursultan Nazarbayev stated: “about 70% of the modern weapons and equipment supplied to the army in 2015 should be produced by the national companies”.

As the CSTO member, Kazakhstan is taking part in military operations with the other organization’s participants. Operations are mostly concentrated on fighting terrorism and Islamic radicalism in border regions of the northern Afghanistan, which threaten the stability of entire Central Asia. In Collective Rapid Reaction Force (KSOR, CSTO) Kazakhstan deploys up to 5000 solders.

In order to strengthen national defense the agreement on creating joint regional air-defence system was signed with Moscow in 2013. According to this agreement the Anti-air systems equipped with S-300 and S-400 will be deployed across Kazakhstan. Although a member of CSTO, Kazakhstan is taking part in the Shanghai Cooperation Organization with limited participation in peace keeping missions.

The Armed Forces of the Republic of consists of the Ground Forces, Air and Air Defence Forces, Naval Forces, and Republican Guard.

“East”. Headquarters Semipalatins. The District has the 11th Tank Brigade, (formerly the 78th Tank Division) at Ayagoz, (Military Unit No.10810);

the 232th Engineer Brigade at Kapchagay (Military Unit No. 58012), the 221th Separate Signal Brigade at Taraz; 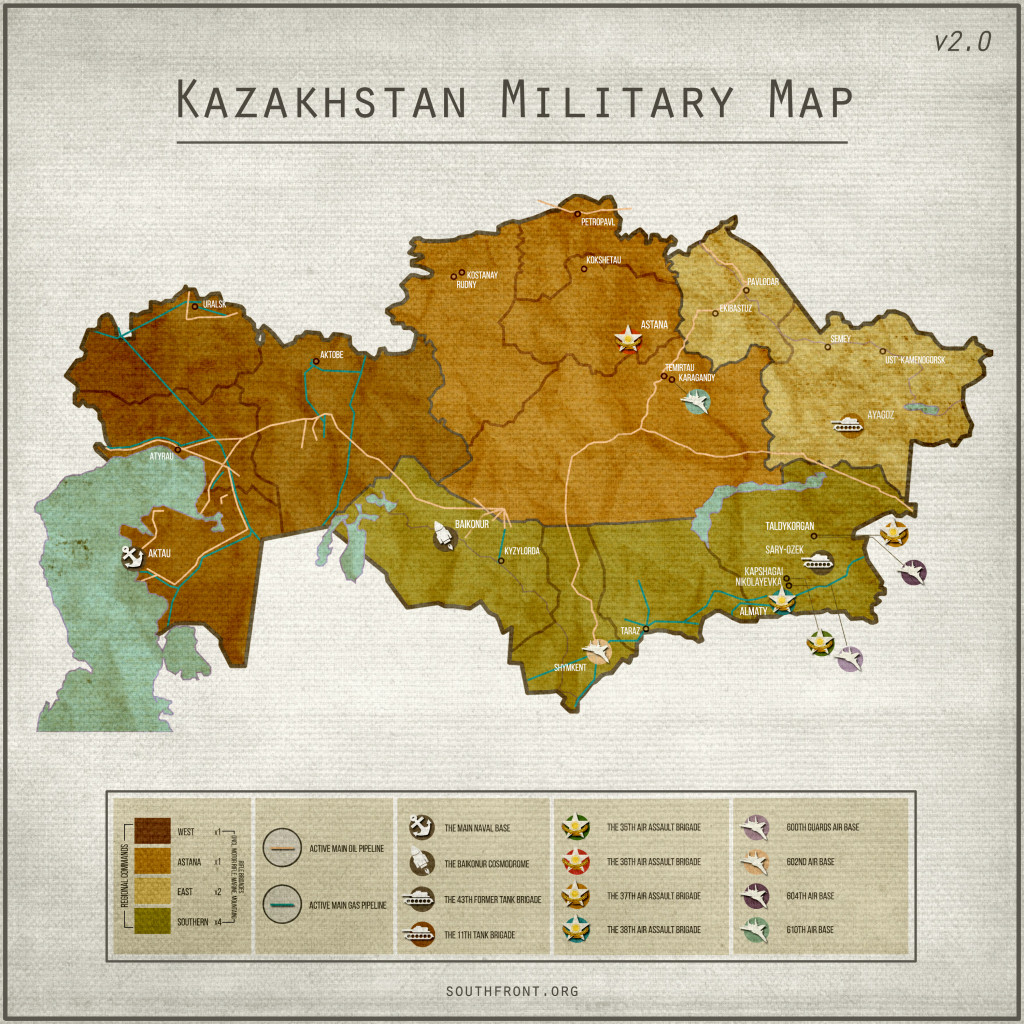 Kazakhstan NAVY operates on the Caspian Sea, based at Aktau (the main base). The Kazakh Naval Force has a strength of 3,000 personnel and is equipped with 21 inshore craft. Naval aviation is situated in Aktau equipped with two Su-27 fighter jets, seven Su-27 pilots, and several helicopters Mi-24s and Mi-17.

The Air Force consists mostly of Russian aircrafts such as MiG-29 and MiG-31, Su-27 and Su-25 frogfoot and Mi-24 Hind as the primary attack helicopter. The air force reportedly struggles to keep its aircraft airworthy, although air-defence fighters fare better than strike aircraft.

The “Arystan” Special Task Force Team of The National Security Committee of the Republic of Kazakhstan (NSC).

NSC special force designed to combat terrorism; fight in the interests of Kazakhstan; protect of strategic objects in Kazakhstan.

The main “Arystan” base is located in Astana as the capital of the state and the place of location of the central office of the National Security Committee. Additional, there are two full-time Special Forces branch: in Almaty, the biggest city of Kazakhstan and financial center, and in Aktau (formerly Shevchenko) in the Caspian Sea – to secure the oil fields.

Military doctrine of this country still has its Soviet origins, as can be seen in military equipment. The 2011 Military Doctrine addresses most of the internal and external threats, with the focal point on a national defense industry. Most of the efforts has been invested into upgrading the Navy and Air force, but such work requires a lot of financial funds. The high maintenance of Air force is a common problem for the less developed countries; as a member of CSTO the Kazakhstan’s Anti-air systems are more than capable to overpass a gap in the national air defense.