Europe, the Middle East and Asia-Pacific are not the only potential theaters of military operations. The Arctic is an area of geopolitical rivalry. The situation there is undeservedly kept out of media spotlight. Meanwhile, 2018 has brought new record lows in the extent of sea ice in the region.

Russia has presented a 1.2 million square kilometers Arctic claim to the UN. Under the UN Convention on the Law of the Sea (UNCLOS), a Coastal state may claim rights to the continental shelf beyond 200 nautical miles by presenting scientific proof that it is a natural prolongation of its continental margin. The Russian Coastal exclusive economic zone can be extended, giving the state exclusive rights to exploit natural resources in the seabed and the ocean. Actually, Russia sits on $8.5 trillion oil reserves. 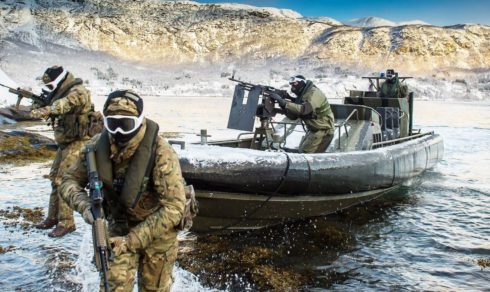 Moscow considers the Northern Sea Route (NSR) lying east of Novaya Zemlya and specifically running along the Russian Arctic coast from the Kara Sea, along Siberia, to the Bering Strait as the water area within Russia’s exclusive economic zone (EEZ) in accordance with Article 234 of the 1982 UN Convention on the Law of the Sea. This article grants all littoral states the right, within their exclusive economic zones (200 nautical miles), to pass non-discriminatory laws and regulations concerning navigation in ice-field areas. The US is a signatory but Congress has not ratified the document. Washington does not recognize the Russia’s claims and seeks to internationalize the region.

The US, Canada, Denmark and Norway have their own claims. The Arctic is believed to hold more than $22 trillion worth of resources hidden beneath the ice, including 90 billion barrels of oil and 47 trillion cubic meters of natural gas. It’s only natural for states to have disputes as long as they are addressed on the basis of international law through negotiations. But the gradual escalation of tensions in the Arctic is a fact.

According to the Danish government’s 2018-2023 defense guidelines, there will be an impressive 20 percent increase in defense spending in the next six years. The Arctic is mentioned as an area of increased activity and military presence. In summer, Norway recommitted itself to NATO defense spending target of at least 2% of GDP with its new long-term plan for 2021-2024 having this commitment as a key premise. Oslo is to invest in “strategic capabilities”, such as the new F-35 stealth fighter, submarines and P-8 maritime patrol aircraft. Canada is to deploy an Arctic naval flotilla. Last year, Ottawa unveiled a plan to boost its defense spending by 70 percent (or more than $30-billion) over the next decade – much of it going to new warships and fighter jets. The Lomonosov Ridge is the main object of territorial dispute between Russia and Canada. It stretches 1,800 km from the New Siberian Islands cross the Arctic Ocean to the Canadian Ellesmere Island. Canada conducts military exercises in the area.

US green berets are training to fight Russia in the region. So US attack submarines are also holding drills. In March, more than 1,500 US military personnel from 20-plus units were brought together for the Arctic Edge 2018 military exercise. The US Coast Guard is looking to “weaponize” its icebreaker ships used to clear paths through the frozen seas. The US has stationed F-22 and F-35 stealth fighters in Alaska. The deployment provides the US with air superiority across the entire northern hemisphere.

Russia is implementing the State Policy in the Arctic Till 2020 and for a Future Perspective. The Arctic is a source of threat to Russia. US submarine-launched ballistic missiles fired from the waters near Norway would leave the Russian military less than 15 minutes to decide if an incoming object was a threat of not, where it was coming from, and how to respond. The Arctic is the only location to enable submarine-launched Tomahawks to strike the Russian intercontinental ballistic missiles (ICBMs) bases in the Orenburg and Krasnoyarsk regions, as well as the Urals.

The Russian Northern Fleet is a joint force comprising 38 large surface ships, over 40 submarines, and an Army Corps including two infantry brigades. The 61st Naval Infantry Brigade is under the Northern Fleet Joint Strategic Command. 7 of 10 combat ready fleet ballistic submarines are based there. About 60% of the operational fleet’s inventory falls on new weapons.

The Ratnik infantry combat system weighs 19–20 kg. It is designed for operations in the Arctic weather conditions to include a night vision helmet, body armor, communications equipment and headphones. All in all, the set comprises 10 subsystems and about 60 individual items. Weighing 7.5 kg, the class 6 armor protects almost 90% of a soldier’s body from 7,62mm rounds, even if fired at short range. It boasts special protection from detection by infrared devices. Made of lightweight carbon fiber, the exoskeleton supports the musculoskeletal system to help a soldier carry weights up to 50 kg during long distance marches.

The Strelets-2 voice and video communication system includes a GLONASS navigation module enabling a squad leader to see the location of each soldier on his book-sized computer as well as send videos and photos to headquarters. Besides each soldier has an individual telephone-sized tactical computer.

The soldiers have the Ruslan all-terrain vehicle, the GAZ-3344-20 all-terrain Tracked Vehicle, and the DT-10PM amphibious carrier. Able to defend airspace from enemy air attacks within a radius of at least 15 kilometers (9 miles), the new Tor-M2DT short-range air defense missile systems is the only system of its class designed specifically for the Arctic region weather conditions. It can protect from homing anti-radiation and cruise missiles, unmanned aerial vehicles, gliders, fixed and rotary wing aircraft. Its DT-30PM platform will be used for Grad and Smerch multiple launch rocket systems.

The air defense capability is going to be boosted with the S-400 Triumf and upgraded Pantsir-1S self-propelled, medium-range surface-to-air missile systems.

The T-80BVM is perfectly suited for the specific weather conditions of the Arctic. It is the first Russian operational tank to be fitted with this new explosive reactive armor. Its upgraded gas-turbine engines has better performance in arctic conditions, starting in temperatures as low as 40 degrees Celsius and be ready for action in only minutes. Tanks with conventional diesel engines need some 40 minutes to warm up in Arctic weather conditions.

This year, Russia unveiled the new Chaborz M-3 buggy destined for operations in the Arctic version. This is a multipurpose lightweight off-road vehicle 4×2 designed for operation by Special Forces units in off-road conditions. It can accelerate it on road to a speed of 130 km/h.

Academic Pashin tanker (Project 23130) is going through sea trials. Two Arktika-class nuclear double-hulled icebreakers out of six have already been launched. The plans include the construction of Lider, the projected super-powerful nuclear powered icebreaker. The first Ivan Papanin (Project 23550) class multipurpose patrol icebreaker, the lead ship of a series of two, is expected to be delivered to the Russian Navy by 2021. The ship is destined for monitoring and protection of Arctic waters, search and rescue operations, escorting of ships in polar waters, transportation of equipment and towing as well as maintenance and support for auxiliary vessels. It can provide protection for vessels operating in polar waters from air, sea and coastal targets.

The gradual militarization of the region is a reality. There are two options here. One is turning the Arctic into a hotbed where a spark could kindle a big fire. The other launching a full-fledged dialogue to address security issues related to the region. Five of the Arctic Council’s eight members are part of NATO with Sweden and Finland being the privileged partners of the Alliance. It makes the issue part of the Russia-NATO relationship. Russia’s military activities in the region have nothing to do with saber-rattling but it has to protect its legitimate interests.

The events related to the US decision to leave the INF Treaty, Syria, sanctions wars and other things in focus of public attention should not eclipse this issue of utmost importance. Cooperating with each other is the only way to maintain safety and regional order in the icy region. A coordinated regional approach to Arctic governance under the framework of the Law of the Sea Convention will build confidence and prevent militarization. The time is right for the Arctic Council to turn into a security-focused forum.

You can’t talk to the U.S only nuke them, that’s how they will understand reason, by extinction.

90 billion barrel sounds much, but if you know that the world annual oil consumption in 2017 was 37 billion barrels it is not more than one more year of oil for mankind (the average is 40% what you will get out of your oil field, not to talk about the technical difficulty to explore in the arctic). Of cause as a state you should take that oil, but shouldn´t it be more important for mankind to reverse population explosion by 1 child family world wide for at least 5 generations instead of counting the troops in the arctic?

No! You were made believe the world is “overpopulated” by deception by the Families that be.

A simple calculator prove the lie:

Say 7 billion population living as Sao Paulo (22 mio) in Brasil, end as an area equal to Uganda. China is about to make mega cities of 100 mio = 7 billion are 70 mega cities only.

By simple logic following above, you see there is plenty of room, food, water, fish, oil/gas globally to more than 70 billion people. Plenty plenty plenty.

Please dont ask why UN and MSM and your school then lie to you. They are peeing dollares from the Families.