Reports have appeared that Jaish al-Fatah militants are massively withdrawing from the Awijah neighborhood of Aleppo City. The Syrian army and Liwa al-Quds (a Palestinian pro-government militia) are advancing in the area. If reports are confirmed, it means that the loyalists will likely take control of the neighborhood in coming hours.

Meanwhile, unconfirmed reports have appeared that the Kurdish YPG has also launched an offensive operation from its positions in the Sheikh Maqsood neighborhood. 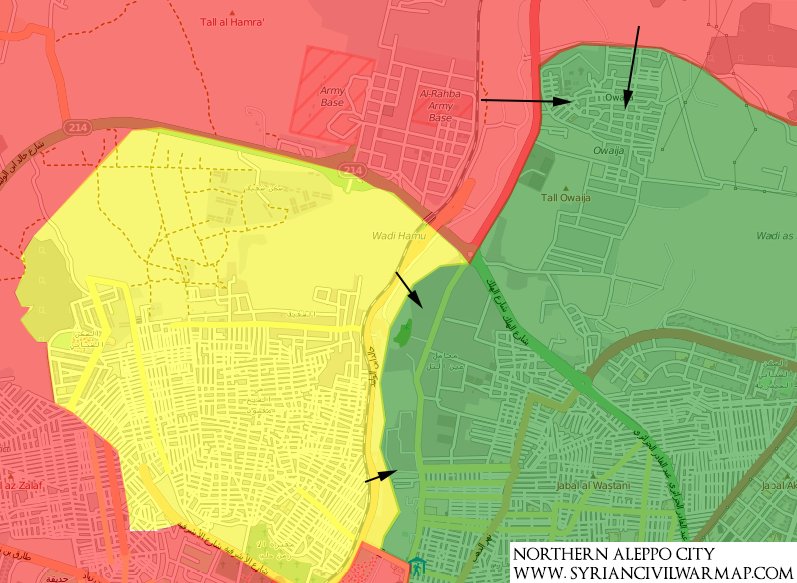 Once Jaish al-Fatah are dealt with, the YPG should be next :)

bork bork. YPG kurds didnt start this civl war and has been as neutral about it as possible. If Kurds had joined the uprise Assads had been gone years ago.

So whats Your reason for YPG should be next…

Jens … remember Kobane? Where the Kurds attacked & pushed the SAA out in 2011?? Then got attacked by ISIS & still refused the help of the SAA??? I trust you did LOOK at the battlemap above?? If the YPG are neutral how are they holding territory in Aleppo?? Not to mention Idlib & scores of other places across Syria?

I remember all about Kobane. They had to make sensible space and PKK were used to it. Else all kurds of today were dead or refugees.

Its very clear and clever that kurds in Aleppo are holding territory because bothtparts has use of it. Think You forget very much that Assads were gone today if Kurds had joined the opposition. You really forget that very much.

Its true kurds claim their normal civil rights back. A lot are even taken their Syrian citisenship away. Samme thing about deportations og many 1000 and the confiscation of many Km2 land given to sunniarabs.

Now its even called etnic cleansing, because Kurds are taking stolen from their grandparents. Many of those grandparent are still alive in those fighters family.

As I know it about there are 120.000 refugees in Afrin. They are mainly refugees from Damaskus, Idlib and up…Dont come with the shit, they instead should sit in their hands or wawe with the Syrish flag.

SAA wasnt protecting any Kurds in Kobane as well – by the way. ISIS throw the army and the system of Damaskus away because of its impotence and low support.

According to wikkipedia ISIS first had taken 350 more or less kurdish villages and drew more then 300.000 kurdish refugees into Kobane and to Turkey. That was only the beginning.

Think You have forgotten some of it:

“SAA wasnt protecting any Kurds in Kobane as well – by the way. ISIS throw the army” NO. The KURDS pushed the SAA out, this is a fact. The YPG are not on the same side as Assad-or ISIS, there are 1,200-1,600 various groups fighting the government, inc. YPG.

“they instead should sit in their hands or wawe with the Syrish flag.” Exactly! That is the choice! If YPG is not fighting alongside the goverment … they are the opposition.

No, they are still alive. To Assads, they were spendable and still are.

YPG didnt take Kobane. PKK from Turkey did with the americans. There was almost none YPG and they had no military and organisatory skills.

You forget that 100%. Since that they are trained and armed and are now very good infanterists and not comparable with their Kobane status.

I really remeber this game, where Turks denied those voluntered liberators heavy weapons for it.

I also rewmber how impotent those SAA was – and there were 400.000 kurds to protect.The Kurds with forks should protect SAA`s as body shields.

You have to have Leaders You can trust, and here Kurds trusted themselves and americans and US/Nato still trust YPG to be given heavy weapons.

You are wrong about neutral and not. ISIS, NUSRA, FSA grew because they would remove Assads and Assads are not loved by Kurds, but accepted.

As long as the YPG dreams of ‘Kurdistan’ there will be war.

But there was no war before the uprise and kurds were no part of it apart from some incidents, which has made many 1000 mainly kurds alive.

Without Kurds Assads wouldnt be here today. They could have joined the opposition and You would have much more ISIS comming – and Kurds.

You not even try to get it.

You must be a pure oxymoron. The SAA has Islamic State to worry after Al-Nusra

The YPG are holding territory in Aleppo in defiance of the SAA, there can be no little Kurdish emirates in Syria, they will have to be dealt with.

You have rocks in your head, you neanderthal ISIS hound. The Armenians are also holding territory in Aleppo. While the Sutoro Militia are seeking autonomy in Syria. Seems like you would move any culture into the sands of time.

Makes me sick reading this. You assume a lot from Your imagnination and construct a lot, which is not there. But there can be changes. You could fx look up, why this enclave are there at all…

YPG should sit down with Assad , they are Syrians .

Agreed. Peace for both in best interest for each party and the country.