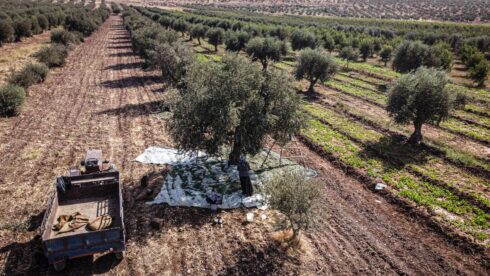 In continuation to their abuse of civilian’s rights, the armed forces supported by Ankara cut 200 olive trees in Afrin’s countryside.

The armed forces supported by Ankara are still abusing civilian’s properties and farming lands in Afrin, which are under their control, in Aleppo’s north, especially concerning olive trees which are reaped this time of the year and are considered the most important harvests in the area.

The SDC’s sources reported that the last abuse carried out by the gunmen was the cutting of about 200 olive trees in Bulbul in Afrin’s countryside for selling the wood.

The sources clarified that they deliberately intruded many farming lands surrounding Sheikhorzah and expelled their owners at the gunpoint in the morning. Then, they brought excavators which they used to pull out the trees from these lands.

Sources also clarified that the number of the uprooted trees from these seized lands has reached 213, most of which are owned by civilians residing outside the areas under the control of the armed forces. Sources also assured that the armed forces moved all the trees to their depositories in Afrin to store them and sell their timber before winter.

SDC published a report at the beginning of this week about the Turkish-baked factions who had started to take over lands, specified for olive plantation in Afrin’s areas, following the same method they had used during the last year.

At that time, SDC sources disclosed that Ankara’s factions had taken over more than 3000 olive trees in Kafr Safra town by raiding over farming lands for two consecutive days.

The gunmen also prevent the owners of the seized olive lands from entering them and preparing for reaping the harvest, which is coming, endeavoring to reap the harvest themselves without caring about the owners who totally depend on their lands to survive.

It was estimated that the number of the olive trees, which have been damaged by the Turkish-backed factions since they took control over Afrin in Aleppo’s north, is about 40 thousand in addition to many crimes like cutting and burning the trees or stealing the harvest and selling it in the markets.

Disgusting behavior from the turks, no different than the zionists. The good news is hts & “sdf” will pay for turk atrocities with blood.

All Syrian territory will be restored to government control.

there is no diffrence between Turks (salafist) and israeli thugs they both are thief and has same bloods to occupy people land and kill muslim using whabhi terriost .

Good morning Rossija! Stolen and kidnappings, rapes, happens since 2018, when YOU allowed UNHUMAN GENOCIDALS and ITS CHIHUAHUAS entering Afrin.

Blame russia all you want, your memory is short, because this mess wqs created by the kurds with american support, not the russians.

The kurds in Afrin could have reconciled with the government and this would have NEVER happened.

The Kurds turned their backs on Syria, this is what happens.

Yes, to be under his feet? If president Assad would recognize decentralization and minorities, Syria would surely improve his status and be better Nation! Me short memory, you (willing) blind.

Destroying olive groves. Now where did they ever get that idea/order ?

In case anyone needs reminding this is the default thuggery of the supposedly “democratic” and wholly illegal “settlers” on the West Bank who claim to be part of the only democracy in the Middle East.