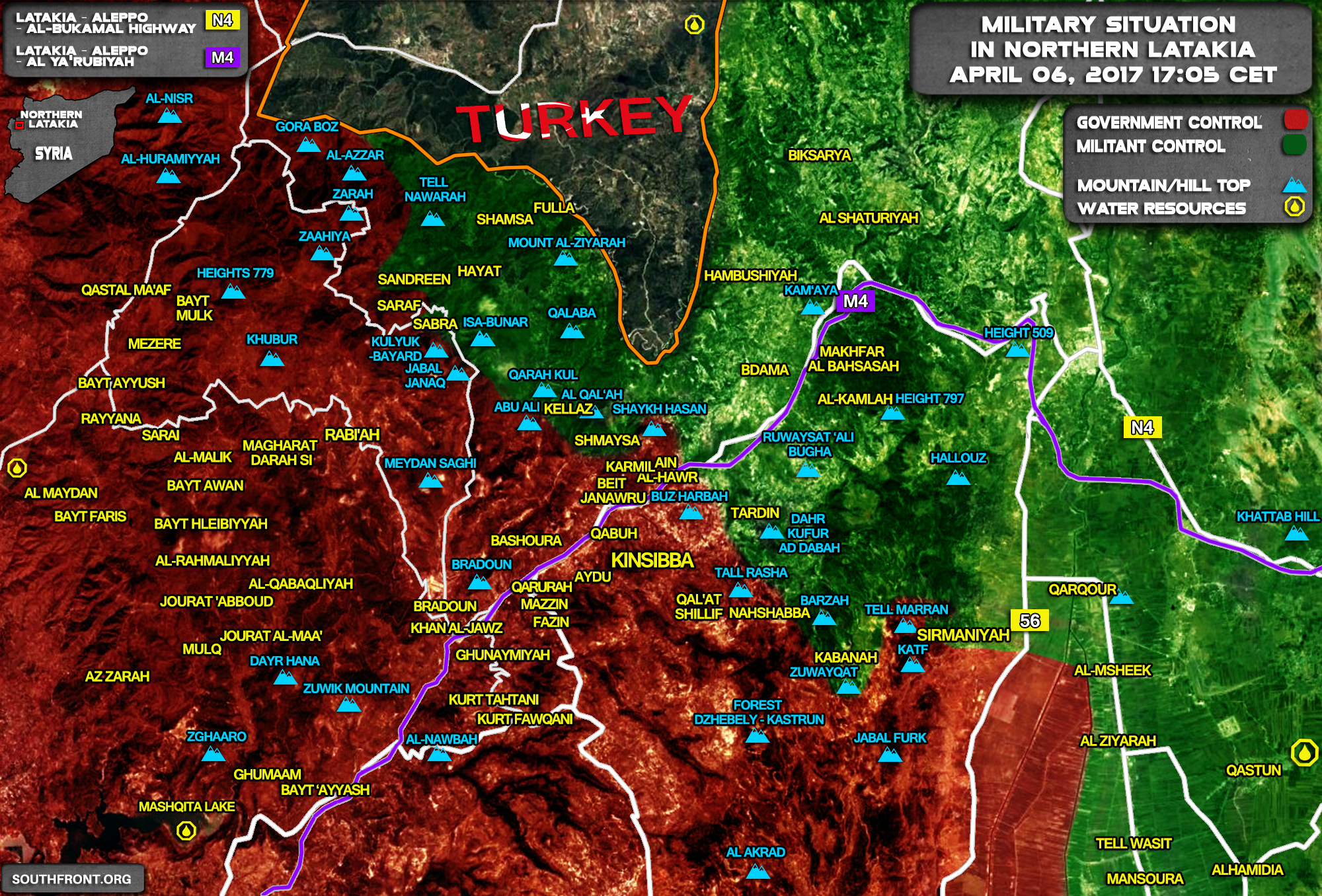 Hours after the launch of a joint offensive of the Free Syrian Army (FSA) and Hayat Tahrir al-Sham (HTS) in Jabal al-Akrad in northern Latakia, the Syrian Arab Army (SAA) was able to repell the militant offensive in its initial phase and jihadist rebels suffered massive losses in manpower and equipment.

According to Al-Masdar News, the SAA destroyed a tank, 3 BMPs, and two 23mm gun armed vehicles around Al-Zuwayqat near Kabani. Sources confirmed that at least 40 fighters from al-Qaeda-linked HTS and the Turkistani Islamist Party were killed or injured in the failed attack.

In the operation in northern Latakia, HTS mainly relies on foreign jihadists who are predominantly Uyghurs, Chechnyans, and Turkistanis. The US-sponsored FSA’s First Coastal Division supported the HTS-led offensive with TOW missile launches.

The Russian Air Force provided government forces on the ground with an intense air support. Airstrikes were delivered on militant positions across the strategic region that lies between the Al-Nabi Yunis mountain and Kabani.

The Syrian Marines, National Defense Forces (NDF), the Sea Infantry along with Russian advisors and some Iranian Fatimiyoun forces hold the frontlline in the northeastern countryside of Latakia.

They need tos 1 buratino exploded over their head so they can feel their eyes, ears, and lungs blow out from their bodys

latakia should be freed more then 1 year ago.

Meh, the front is stable, and there is no point in pushing in Lattakia until Idlib can be dealt with properly. The priorities are (1) rolling back HTS and friends around Hama, (2) rolling back IS around Lake Assad so that the Kurdz don’t get a free hand in helping the Yankistani cvntz partitioning the country.

the prioritirs 1 -10 are to close borders.

once closed, turkey stops shelling. like another part of syrian turkish border.

meanwhile i though also to block the jordan border.

For jordan maybe yes for now only problem just israeli plane sometimes bombed them, for turk border its hard for now unless saa already beat all area they want to capture and make idlib area the last front, might be yes but for now they just able play yoyo move around there cause how unstable turk politic

This is quite exquisite to listen all the nationalities what are fighting there as mercenairies…! So its immediatly clear, that there is really nothing like “moderate Rebells” that are all TERRORISTS! . Tats a real true message!

Most of these goat fuckers are foreigners, one little piece of vital info that our feckless Western MSM presstitutes will never admit.

Drop a nuke on Syria. PERIOD

The reason is clear WHY there ar ell clashes going on here at Hama and so on, since Turkey wants to take an other opportunity to occupy Syria with his troops and put there his own Sunna Terrorists…